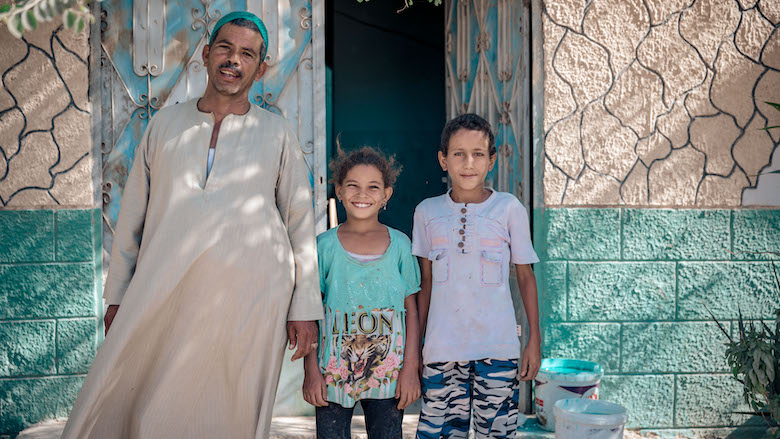 ‘’We, the residents, get to prioritize the projects we need,’’ said Hassan Kamel, a member of Sohag governorate’s local development forum in Upper Egypt. ‘’This has never happened here before; it has made me feel that, as a citizen, I have an active role in the development of my village.’’

The process Kamel referred to is a component of the seven-year Upper Egypt Local Development Program (UELDP), which has received US$500 million in World Bank financing. Launched in 2017, the program supports the government’s efforts to develop Upper Egypt in the south of the country where development has lagged behind, by improving the local business environment. This has spurred private sector-led job creation and strengthened local government capacity to deliver infrastructure and services.

In 2021, the United Nations Department of Economic and Social Affairs listed it as an example of best practice among development initiatives aimed at meeting the universal targets set out in the UN’s Sustainable Development Goals for 2030.  The program has been also included as a key contributor to the Egyptian government’s programming for FY2018/19–FY2021/22.

Egypt’s population passed 100 million in early 2020, with one third of it in Upper Egypt. Yet the region falls behind the rest of the country in terms of economic growth, generating employment, connectivity to markets, and access to quality services. Almost half of Egypt’s poor live there and the four governorates included in the program are among the poorest in the country.

Since its launch, the UELDP has sought to redress this lagging development. It has:

Financed infrastructure and services responsive to local needs. The program has improved governorates’ capacity for: inter-sectoral, medium-term capital investment planning; project design, appraisal, and implementation; environmental and social risk management; and the sustainability of local infrastructure through asset management. Infrastructure has been developed to improve the quality of life for citizens, focusing on urban development, city upgrading, and basic municipal services (water, sanitation, roads, and electricity).

The infrastructure and services financed by the program are estimated to have reached about 5 million citizens so far in the first two governorates—or one-third of their population. Half of the estimated beneficiaries are women.

Infrastructure projects are improving people’s wellbeing, often directly. An example is the covering over of the water canal next to the village school in Awlad Nosseir in Sohag. “The situation was very bad before,’’ said Hassan Abbas, a local resident. ‘’Garbage was dumped around the canal. This led to terrible odors that reached the school and very negatively affected teachers and students.”

School students used swim in the canal, even though it was unsafe to do so. “I had a bad personal experience with this canal,” Hassan added. “My son was forced by his school colleagues to go down into the canal. He almost drowned and was rescued at the last minute. Now things are different. Students can no longer swim in the canal, garbage is picked up, and nice greenery has replaced the open canal.’’

Introduced an integrated approach to local competitiveness. This includes improving government-to-business (G2B) services by issuing shop licenses and construction permits; encouraging sector competitiveness through locally-driven Public-Private Dialogues targeting four clusters (textiles, sugar cane, embroidery and furniture); and improving management and services in local industrial zones. More than 3,300 local firms had felt the benefit of these initiatives by 2021, with the occupancy rate in industrial zones increasing by 20 percentage points in Qena and 5 in Sohag since 2017.

The idea is to offer investors faster services at technology centers that serve as hubs for registering construction plans and obtaining building licenses and permits. To date, the program has reduced the time required to obtain construction permits by at least 25% in several, targeted District Service Centers.

“I have been applying for construction permits since 2012,” said Hashem Abdel Hamid, an architect in Sohag, who made use of its upgraded technology center. ‘’Previously, permits took me two to three months. Now, the duration is much shorter and the process much more organized.”

Enhanced citizen and business engagement through a participatory process. Citizens, including women and youth, are involved in the selection of investment projects through regular consultation. Over 8,500 local citizens have participated, almost one-third of them women, and their inputs have informed the choice of projects included in the annual budget.

Local businesses have convened public–private meetings to identify their priorities, such as Investor Forums in industrial zones and sector competitiveness initiatives, where local businesses develop action plans to challenge the constraints they face.

‘’The program is creating an environment for evidence-based policy reform and the institutional reforms essential to improving the competitiveness of lagging regions and to empowering local governments to address community needs and priorities,’’ said Marina Wes, World Bank Country Director for Egypt, Yemen, and Djibouti. ‘’The hope is to create a replicable model for boosting the development of lagging regions in Egypt and the Middle East.’’