Dreaming big to save mothers during childbirth in remote Nepal 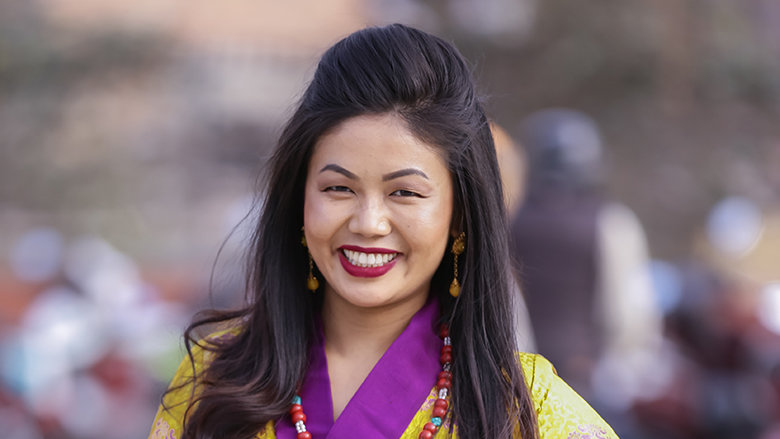 Thirty-year-old Yangzom Sherpa recalls the most terrifying incident in her life. As her mother was delivering her sixth child, Yangzom was waiting outside the room with her father and her older sister. “I could hear my mother wailing, and see blood streaming out of the room. We were all crying outside the room, especially my two brothers and a sister. They wept uncontrollably whenever they heard my mother crying in pain,” she shares. “It took my mother three days to deliver the baby. When my grandmother brought out a baby brother, we were all happy. We thought my mother was okay.” They later learnt that their mother had died from post-partum hemorrhaging. After their mother’s death, Yangzom and her siblings couldn’t stay with their father, so they were sent to live with relatives in other villages and districts.

Encouraged to save lives

When Yangzom revisited her village Ghunsha, in the district of Taplejung, 20 years later, she discovered that mothers still died during childbirth, mostly due to the unavailability of health posts. Ghunsa is three days’ walk from Phungling, the district headquarters of Taplejung, where the nearest health centre is located. Yangzom recalls, “I was shocked to learn that people living in our village still had to walk for three days to get basic medicine and that the lives of mothers and children continued to be at risk.”

Her mother’s death, and her knowledge of the deaths of other women, encouraged Yangzom to do something to save the mothers of her village. Yangzom remembers, “There were stories about mother and child dying on their way to hospital in a helicopter, other times there were stories about mothers succumbing to post-partum hemorrhage. That made me restless but I didn’t know what to do.”

Providing health services in her village

After eight years of challenging and hard work, she was able to successfully establish a temporary community health post in a primary school in her village in 2014. Yangzom says, “The major obstacle I faced was the retention of health professionals.” She hired a health assistant and an auxiliary nurse for the health post, and the medical services provided include delivery assistance, vaccinations, temporary family planning facilities, and other awareness-raising on good nutritional behavior.

According to Yangzom, around 150 people have already directly benefitted from the health post so far, including saving the lives of mothers and babies by providing them necessary primary care.

Yangzom also had the aim of constructing a permanent health care facility in her village. To help finance the construction, she started a crowd-funding initiative, registering the ‘Ghunsa Foundation’ to enable people make financial contributions. She set a target to raise NPR 4 million (approximately $35,000) for the construction, and has already raised NPR 4.8 million (approximately $42,000). The temporary health care facility is almost complete and is planned to be inaugurated by end of 2018.

“However, I am taking it one small step at a time,” Yangzom said. “My next step is to make the temporary health care facility into a permanent one. My dream is to gradually upgrade it into a fully-functional, well-equipped hospital with many doctors and nurses.”

"I was shocked to learn that people living our village still had to walk for three days to get basic medicine and that the lives of mothers and children continued to be at risk."
Yangzom Sherpa
Social Worker
Api