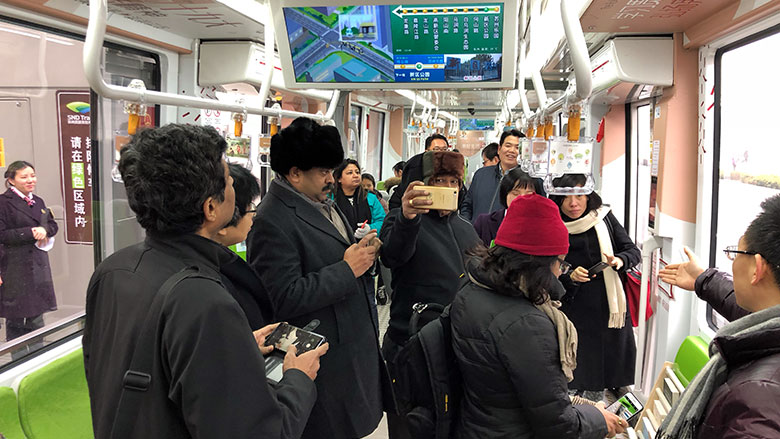 The India delegation took a ride on tram line 1 in Suzhou, one of the most economically developed cities on China’s eastern coast

It is no secret that China and India’s rapid economic expansion have led their big cities to quickly urbanize. As much as this can create opportunities for citizens, it also brings problems that may worsen quality of living. For those two countries, urbanization has ushered in a surge in private car ownership – 310 million vehicles in China (2017) to India’s 210 million (2015) – as well as severe traffic congestion, air pollution and higher greenhouse gas (GHG) emissions.

To address this, the Global Environmental Facility (GEF) is working with both countries to establish policy frameworks that promote public transport and manage travel demand in select cities. Facing similar issues and challenges, it was only natural that the two countries came together to exchange expertise.

Over five days in early 2018, an Indian delegation from the Ministry of Housing and Urban Affairs (MoHUA) and affiliated agencies, as well as World Bank staff on urban transport development projects in India, held a South-South Knowledge Exchange with staff from the World Bank in China and Chinese government counterparts.

During their stay in China, the delegation carried out a series of site visits and discussions in Beijing, Suzhou, and Guangzhou. Beyond learning about China’s development, the Indian delegation shared lessons of their own related to project funding and financing mechanisms (including public-private partnerships), public transport promotion, and policies to motivate local governments to improve urban transport.

“It’s a priceless chance,” said Liu Xin, Deputy Director-General of the Comprehensive Planning Department, MOT, “for policy makers from China and India to sit together, share their past results, current practices and future outlook. It’s always good to know what your colleagues in another country are doing, and then reflect their experience and lessons in our own country context.” GEF’s project management offices also shared with each other their experiences on implementing projects at the local levels in each country.

Visiting Suzhou, one of the most economically developed cities on China’s eastern coast, visitors took a ride on tram line 1. The tram bus is running at 30 km/h, connecting 28.5 kilometers within the Suzhou High-Tech Zone, and seamlessly integrating with the metro network. The delegation also visited the bus-only-lane network within the city center of Suzhou, which gives buses the precious right of way along busy streets to improve running speed.

Mukund Kumar Sinha, Joint Secretary of the MoHUA in India, was impressed by the revival of the tram, once seen as obsolete. He also found the bus-only-lane network very cost-effective to improve the speed and quality of bus service. “Urban planners and policy makers should take all means of public transport into consideration, and choose the right ones that adapt to their cities’ real circumstances,” he said. 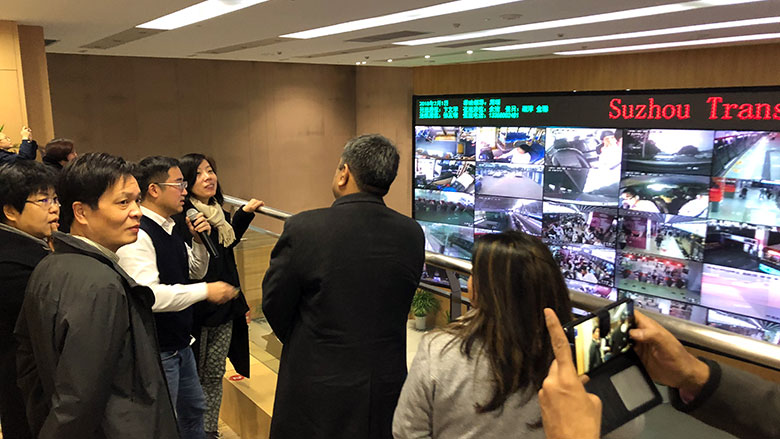 In the southern Chinese city of Guangzhou, where more than 30 bus routes ran through the 23 kilometer-long Zhongshan Road BRT corridor, the delegation members heard of the many changes brought by the BRT since 2010. It’s the first BRT system in China, becoming well-known internationally for how much it was able to improve traffic. But after several years’ operation, some issues, such as bus platooning, emerged. This gave the Indian delegation a sense of the unintended issues that may arise as they work on their own BRT projects.

“We are now implementing six green demonstration projects in five Indian cities, which include BRT components,” said Murli Krishina from the Urban Development Department in Karnataka. “When designing the projects, we’re thinking of the seamless integration of BRT stations with Non-Motorized Transport (NMT) facilities, like bike lanes and pedestrian ways, in order to better improve efficiency, safety, cost-effectiveness, and reliability of public transport, and ultimately provide incentives to shift from the use of private vehicles to BRTs.” He also found Guangzhou’s BRT online payment system interesting, where riders can pay their bus fare via mobile apps or scanning a QR code on bus tickets.

In their meetings in Beijing, the delegation also discussed electric vehicles and bus terminals with charging poles for electric buses.

China, after all, now accounts for 50% of global electric vehicles. “EVs are being increasingly considered as the key green low-carbon mobility solution, but that is still in its early stages. At this point, political commitment and policy support is of vital importance. I’m happy to find that both Chinese and Indian governments have taken quick steps in embracing the new technology and made great efforts for the penetration of EVs. We can definitely learn a lot from each other down the road,” noted Raman Krishnan, Senior ICT Specialist with the World Bank.

As India and China forge on their development paths, avenues for collaboration between these two powerhouses should only grow.