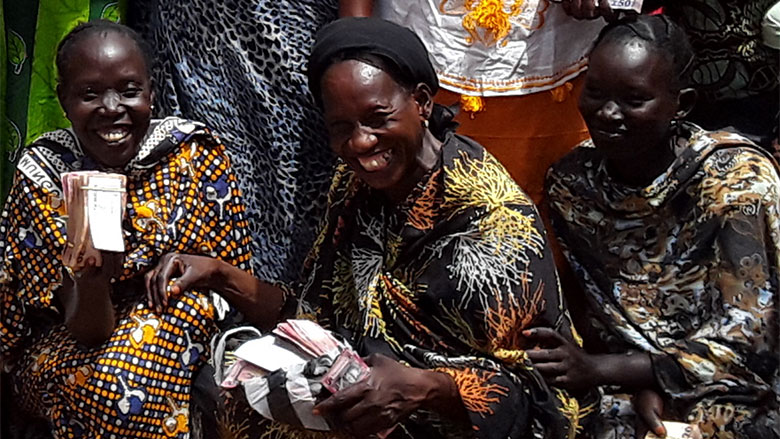 Beneficiaries after receiving their wages following the end of a work cycle.

A social safety net program in South Sudan provides temporary income to poor and vulnerable households. Already operational in urban and semi-urban areas of the capital, Juba, the program is being expanded to six other areas of the country. Through their direct participation as laborers in activities like road repair, the project helps give people the income they need to sustain their level of consumption and improve their resilience to economic shocks. It is also designed to strengthen community assets and boost social cohesion.

Few countries in Africa have been through as rough a patch recently as South Sudan. But that does not mean that it is impossible to provide it with at least some forms of long lasting support. The public works component of the Safety Net and Skills Development Project (SNSDP) is operational in the city of Juba, for example, and is benefitting 6,000 households (or about 50,000 individuals)—over 70 percent of them female-headed. Of all the individuals supported, about 30 percent are internally displaced persons (IDPs).

The longer-term aspect of the project is to establish the building blocks of a national social protection system, to be used to help the South Sudanese government and its partners design—and implement—social protection interventions in the future.

Despite the uncertain political and very difficult economic environment in South Sudan, SNSDP has succeeded in getting key results because of the high degree of commitment of government counterparts, and dedicated, innovative efforts by the World Bank team.

The results of the public works program include:

Cash transfers have had a positive impact on the lives of the beneficiaries, including increased purchasing power for basic necessities, such as food, clothes, and medicines, and home improvements. They have also allowed households to pay children’s school fees and uniforms, contributing to improved results in education.

“People’s lives are improving, they have nutritious meals to eat, and their human capital is being improved through continued investment in health and education,” says Dena Ringold, Practice Manager of the Bank’s Social Protection and Jobs Global Practice.

Improvements in community assets have increased access to services and mobility due to better road networks and reduced crime. They have also empowered beneficiaries to engage in small-scale income generating activities, such as setting up tea kiosks, selling vegetables, and so on.

“These public works are helping to build assets that will be used even after the completion of the project,” says Sahr Kpundeh, World Bank Country Manager for South Sudan. “Infrastructure like feeder roads is easing access to markets, schools, and health facilities.”

Most importantly, public engagement in public works has provided a platform for greater interaction and social dialogue in Juba, contributing to local-level peace building and stabilization by creating a sense of unity and social cohesion among diverse ethnic groups. “This project has united us,” says one participant. “We feel like the sons and daughters of one person.” 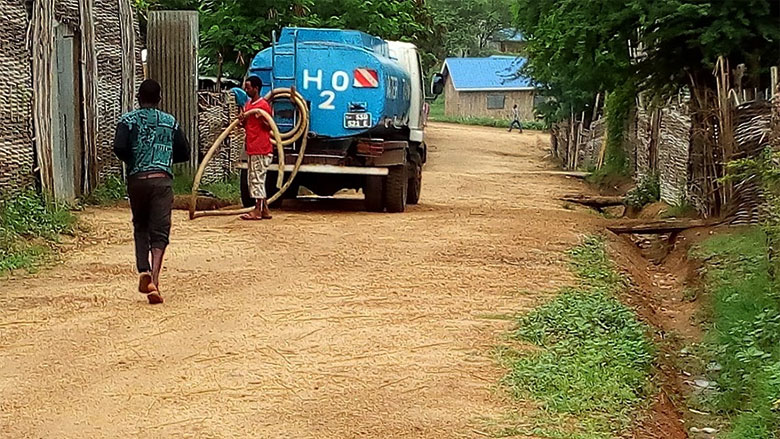 Before being repaired, roads were too rutted to allow tankers to deliver water direct to homes in this neighborhood.

Coordination and oversight structures have also been established within target local governments, and could be replicated to serve as the pillars of a coherent national social protection system. Other results include:

Given the positive initial results of the intervention in Juba, preparations are underway to scale up the public works component to six other counties (Gogrial West and Tonj South counties in Warrap state, Bor and Pibor counties in Jonglei state, and Torit and Kapoeta East counties in Eastern Equatoria state)—Jonglei is one of South Sudan’s most conflict-affected states.

Given limited outside access to many of these areas, and the urgent need to reach some of the poorest and most vulnerable households outside Juba, the World Bank has partnered with the United Nations Office for Project Services to implement the public works component in these six locations. The scaling up is expected to benefit an additional 35,000 poor and vulnerable households (about 210,000 individuals). There is also a need to ensure that all ethnic groups are provided with equal opportunities to participate.