Toward a New Partnership: Georgian Voices

The new World Bank Group Country Partnership Framework for Georgia will support the country in its efforts to end extreme poverty and boost shared prosperity in a sustainable manner. To learn more about the challenges that Georgian citizens face in their daily lives, we spoke with several individuals. Beso, Maia, Lia, Manana and Rusudan share their personal stories. 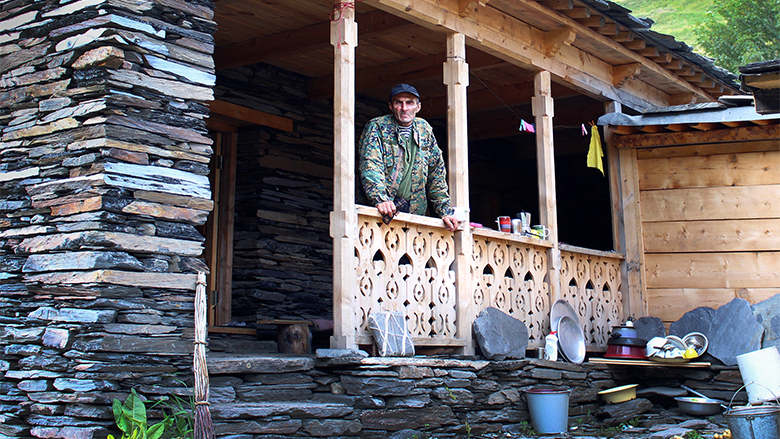 Every winter, Beso Idoidze stands guard alone over the historical highland village of Dartlo. Even the harsh cold winds of Tushetian winters won't make Beso abandon his post. As long as there is wood to burn and essential food items like potatoes, sugar, flour and olive oil in his larder, Beso perseveres.

Situated 2,000 meters above sea level, Dartlo village is cut off from the outside world from late September to the end of April, during which time it is only accessible by helicopter.

Once summer arrives, Dartlo's other residents start to return. Their only source of income is tourism. Some own guest houses, others produce traditional handicrafts, while those who have horses offer riding tours. Some people also get involved in the ongoing restoration work that sustains the vernacular architecture of this unique village.

However, the tourism season is short: if lucky, the village might be able to stay open for four to five months - from early June to mid-October. That is why most of the residents prefer relocating to other, larger towns, or to the capital Tbilisi – bringing them closer to regular jobs. Over the years, the number of residents in Dartlo and neighboring villages has been steadily declining, leaving only elders like Beso to hold down the fort. 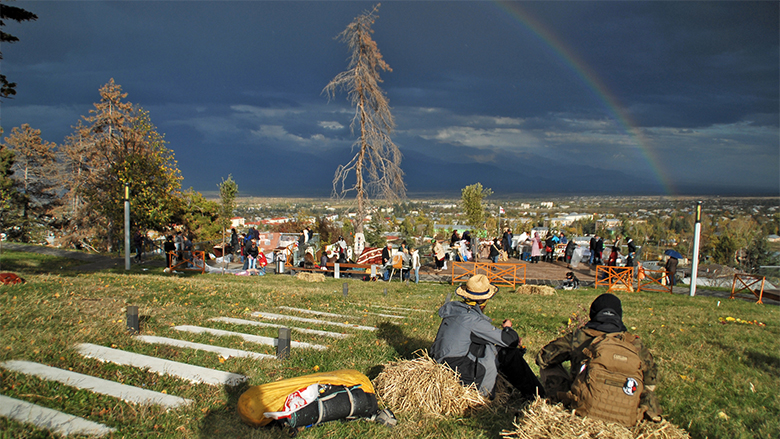 Maia Kiknadze runs a travel agency that was established in 1991, right after Georgia gained its independence. Caucasus Travel, the very first tour operator in Georgia, was created at a time when the country was virtually unknown to people internationally, had no tourism infrastructure, and lacked workers trained in the tourism-service industry.

According to one employee, “The company has spent many years and a lot of effort promoting the country internationally and training staff such as tour guides and drivers. In addition, because of the severe scarcity of places for guests to stay, we had to personally visit the regions and scout for living quarters suitable for foreign visitors.”

In the beginning, the company consisted of only three people, its founders. Within a few years, however, Caucasus Travel had grown and spawned two additional companies, Georgian Events and Explore Georgia, while a third company, CT Auto Georgia, came along later. By 2007, all of these companies, along with several others, were united under the banner of one holding company - Georgian Hospitality Group (GHG), which today employs 60 people full-time.

Georgia is increasingly renowned internationally for its culture, wine and cuisine, and adventure and eco-tourism. Maia believes that her company has played a considerable role in raising awareness about Georgia and in helping build-up its burgeoning tourism industry. 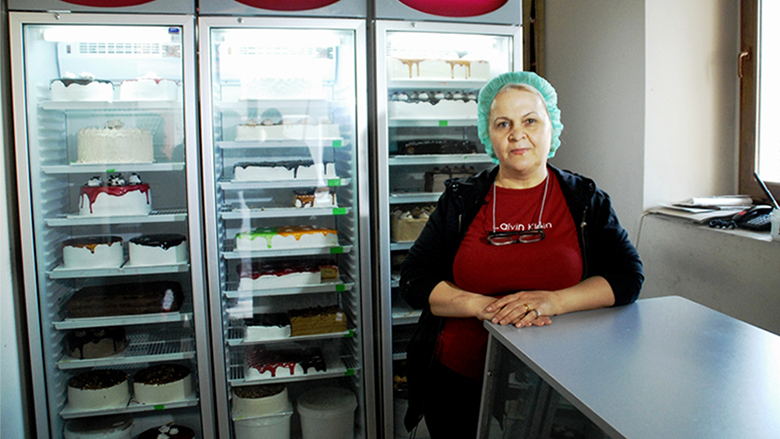 Lia Aleksishvili, who lives in Georgia’s Kakheti region, remembers when her bakery in the city of Telavi was only a tiny business. Over the years, she has managed to transform the small shop - which often struggled to make ends meet - into a successful and bustling local bakery.

Lia's business also benefits the local community. The bakery employs four full-time workers and, when the holiday season arrives and demand for desserts and pastries peaks, four more people join part-time. Lia has also managed to use some profits from the bakery to invest in renovating the second floor of her building, turning it into a popular bed and breakfast. 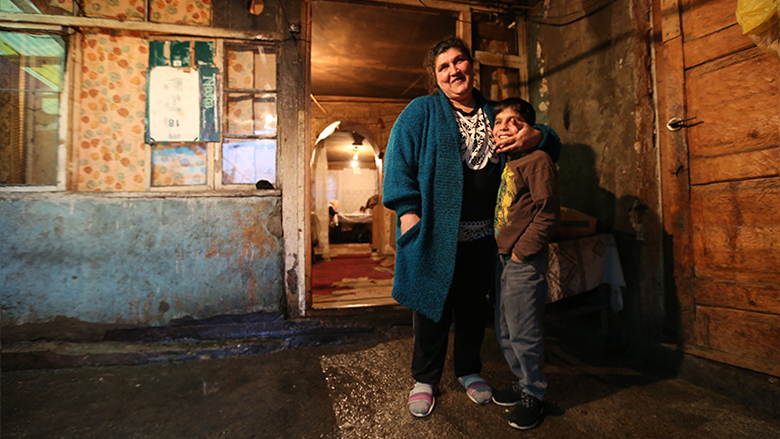 Manana is a stay-at-home mother of seven children who are aged between 9 and 22 years. Her family lives in a three-room cinderblock hut with a leaky roof and cardboard for windows. Her husband Tamaz spends most of his time at the landfill hunting for scrap metal, and is the sole breadwinner.

Manana sees herself as living on the edge of extreme poverty, but she believes that there are households which are doing much worse. She is proud of her choice to have so many children. “They wear each other’s hand-me-downs, and it’s a lot of work, but I love kids. I always wanted to have as many as possible. There are large families who live in train carts, or who don’t even have a roof over their heads. There are people much worse off!”

Manana believes that the best way to tackle poverty is through equal access to education. “When someone with no ability can get into a school just because they can pay, and when my child, who is talented, cannot just because we don’t have money, that is wrong," she says. "They are trading talent for money and I don’t want that to happen in our country anymore. My 14-year-old daughter Iro is great at table tennis, but we can’t afford to equip her or pay for regular lessons.”

Monthly social assistance from the state to the family amounts to GEL 500, which they claim is barely enough to buy shoes for all seven children, not to mention other mandatory things for school that don’t fall under the scope of the assistance program. Having an illegal job, with the fear of losing social assistance for the entire family, doesn’t seem like a promising solution to fighting poverty, Manana argues.

Nevertheless, Manana does her best to stay positive and optimistic about the future. This mother of seven dreams about having enough space for every one of her kids, in a house with dry walls and a roof that keeps them all warm and healthy. 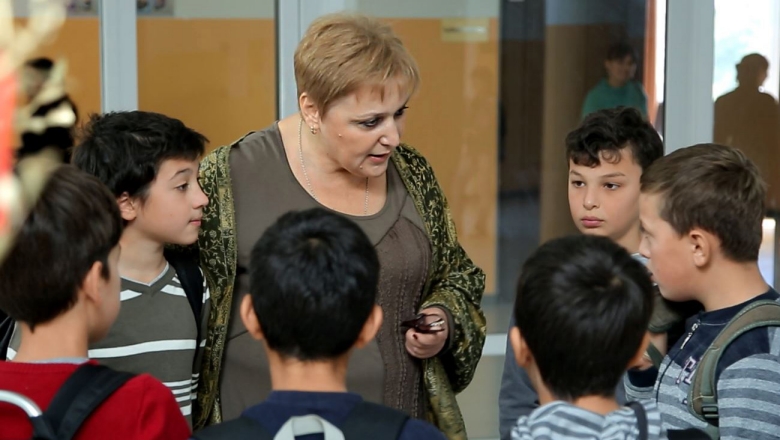 Rusudan Kekelidze is the Principal Teacher at public school #210 in Tbilisi. In the early 1990s, she was at the very start of her professional career as a teacher. She still has vivid memories of that time: the ever-present smell of kerosene, students sharing tiny desks, and very poorly-equipped classrooms. But she also remembers that everyone had a common desire - to survive.

"It may sound dramatic now, but it truly was a fight for survival - physically, literally," says Rusudan. "It was a fight for the future. No matter what the skeptics might say, we have travelled a long and difficult path since then. Today, we see how our school has developed. It is so much better than we could have imagined. Take, for example, the school's infrastructure as a vivid sign of progress. Or, just listen to the words and sentiments in the hallways - I can, I want to, I will do, I'm happy to...”

"The future I imagine is more colorful and cheerful, and focused on success. I hope our students are able to start preparing their future paths here, within these walls. I hope the school is a good model for life, which is gradually developed and enriched with knowledge and practice," says Rusudan.