After Ebola, Liberia’s Health System on Path to Recovery 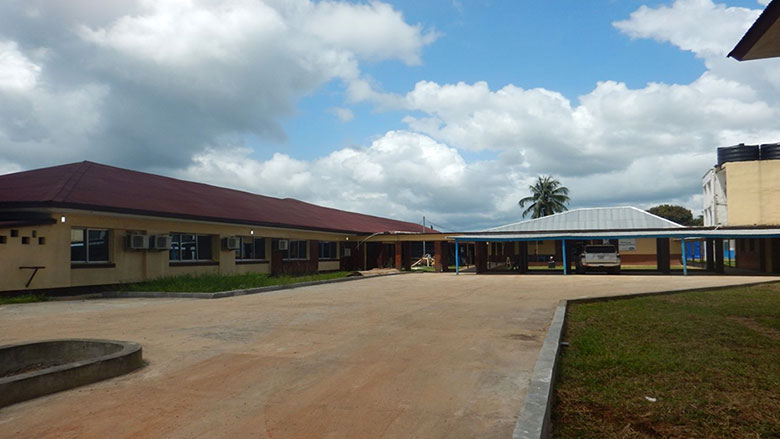 Shirley Kamara, 37, an expectant mother, smiled as she received medical care at C.H. Rennie Hospital in Kakata, just over 40 miles (68 km) north of Monrovia. “Our hospital is far better now since the Ebola outbreak,” she said. “We are encouraging our people to come here because everything is getting better.”

C.H. Rennie Hospital in Liberia’s Margibi County was one of the facilities hardest-hit during the Ebola Virus Disease (EVD) outbreak in 2014; 14 of its health workers died. But, as a result of the international attention the crisis attracted, health care services have since improved, according to Dr. Asinya Magnus: “Ebola revolutionized health services in Margibi,” he said recently, “with a transition from a closed to an open health care system.” The health system’s new infrastructure is more decentralized, and health workers receive both more medical supplies and training in Infection Prevention Control procedures.

The Ebola outbreak exposed the weaknesses in Liberia’s health care delivery services, already greatly incapacitated by the time the World Bank and other development partners intervened in it in September 2014. The dilapidated state of the country’s public health care included everything from inadequately qualified health practitioners and poorly equipped medical facilities, to the lack of infection control measures.

The response led by Liberia’s Ministry of Health with support from the Bank, the US Government, and UN agencies such as the World Health Organization, UNICEF, the UN’s Family Population Fund, and World Food Programme to the EVD outbreak resulted in bringing the number of Ebola cases down to zero. Social mobilization and community driven activities were carried out in each of the country’s 15 counties. Almost 600,000 infants were vaccinated for measles, and drugs and medical supplies were provided for children under-five children and for pregnant women.

As many as 47 vehicles, including ambulances, were procured and hazard pay provided to 20,000 health workers from state and private health facilities. Death benefits were also paid to 154 families of health workers who sadly succumbed to EVD while combatting the outbreak, which killed a total of 4,810 people in Liberia, 2,544 more in neighboring Guinea, and another 3,956 in Sierra Leone.

The need to continue to strengthen Liberia’s health system, and help prevent similar outbreaks from exacting such a devastating human toll, is still very real. To achieve this, the Liberian government has developed an investment plan for “Building a Resilient Health System.”

The World Bank is supporting all of the plan’s nine pillars as the largest financier, which includes support for the health workforce and for health infrastructure, as well as for epidemic preparedness and response, quality service delivery systems, community engagement, health financing systems, medicine and supplies.

Health infrastructure activities supported by Bank funding include the construction of 82 housing duplexes to improve living conditions for health workers and attract personnel to work in the hard-to-reach rural areas where they are most needed. Preparations are ongoing, too, for the building of the state-of-art Redemption Teaching Hospital in the suburb of Caldwell in Liberia’s capital, Monrovia, and new dormitories and classrooms at the A.M. Dogliotti College of Medicine at the University of Liberia. All this will bring relief to the inhabitants of Liberia’s rural areas and to densely populated suburbs in Monrovia.

Over 520 pieces of equipment, including X-ray units, infant incubators, electrosurgical units, and vaccine refrigerators, and a total of 200 instruments and over 120 pieces of laboratory equipment, chemical , centrifuges, and reagents have also been supplied by WHO/UNOPs with support from the Bank.

Initially, the Bank financed the development of 24 triage and isolation facilities in five counties for infection control. These, located in rural hospitals and health centers, help in the screening of inpatients for infectious diseases and also help to isolate if required. Existing isolation facilities have been renovated in three major hospitals, increasing their capacity to admit large patient caseloads, both from Liberia and neighboring Guinea.

In particular, the triage and isolation facility in the F.J. Hospital in Sinoe greatly strengthened patient management and infection control during the recent meningococcal disease outbreak in and significantly contributed to the containment of the disease.

The Bank also supports medical education programs in Liberia. These include the Graduate Medical Residency Program (GMRP) in Internal Medicine, Pediatrics, Obstetrics and Gynecology, Surgery, and Family Medicine. As a result, the GMRP and pre-clinical education at the University’s College of Medicine, for the first time in history, will have set of core and sub-specialty faculties to cover entire education programs for the next two years. Currently, about 48 physicians are benefitting from the program, with the first 16 specialists due to graduate in July.

With Bank support, three members of the Ministry of Health are also pursuing Masters courses in medical sociology, field epidemiology, and laboratory training at the University of Ghana.