Nepal: Moving Up the Ladder – A Blog Series 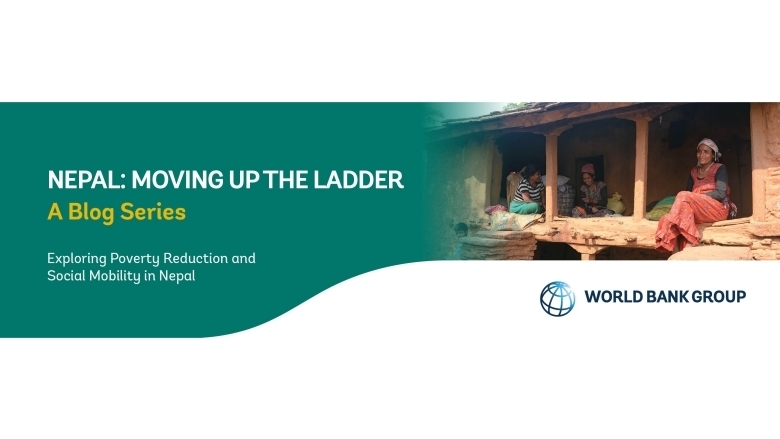 The Moving Up the Ladder blog series aims to discuss the trends and drivers of living standards changes in Nepal in the last two decades and identify key challenges that lie ahead in improving the economic conditions of Nepalis, particularly the poor and the vulnerable. Over the next few weeks, we hope to spark a conversation around poverty reduction and long term economic development in Nepal and the fundamental question of how to build, share and sustain prosperity in Nepal, for all Nepalis, today and in the future.

Lahjung Bhotia is from Hatiya, Sankhuwasabha, a remote mountainous district in Eastern Nepal. She and her husband rent land and grow black cardamom with a third of the production going to the land owner. On the side, the couple runs a small tea shop. She claims to be doing okay, not terribly good, but just okay. Her life’s singular objective is to educate her children well enough so that they can work in offices. Lahjung is one of a third of Nepalis who have benefitted from the remarkable progress on poverty reduction the country has experienced in the last two decades. Yet, she is also one of almost a half of the country’s population who may not be poor based on the national definition of poverty but has to work constantly to make ends meet.  Read more

Blog #2 - Against all odds - What is driving poverty reduction in Nepal?

The year 2015 was rough on Nepal. The catastrophic earthquakes that struck the country in April/May caused widespread destruction of life and property and was followed by disruptions in the south that brought cross-border trade with India to a complete standstill for 4 months. As dramatic as these recent shocks have been, Nepal is no stranger to conflict and fragility. A 10-year violent Maoist conflict ended in 2006 but the ensuing years of drafting a new constitution were turbulent; politics often dominating the discourse as opposed to economics. But despite these unfavorable odds, Nepal made rather surprising progress on improving living standards and reducing poverty. What was behind this progress on poverty reduction Nepal achieved amidst a violent conflict and a tumultuous post-conflict recovery? Read more

As we think about Nepal’s progress on poverty reduction, it is appropriate to reflect on inequality and how it has evolved during this period. Has every Nepali benefitted from the living standards improvements that have been realized in the country? Or have some been left behind? Read more

Goma is a girl, born in rural Kalikot. Her parents are illiterate, belong to the Dalit community and are in the bottom 20 percent of Nepal’s wealth distribution. Champa is also a girl born to a household very similar to Goma’s, but her parents are from a village in Siraha. Avidit is a boy born to an upper caste household in urban Kathmandu. Both his parents have a university education and come from affluent backgrounds. In a society where opportunities are equally available for children of all socio-economic backgrounds, Goma, Avidit and Champa would all have equal odds of becoming doctors, or engineers or successful entrepreneurs. But in Nepal, the life trajectory of these children begins to diverge very early in life. Read more