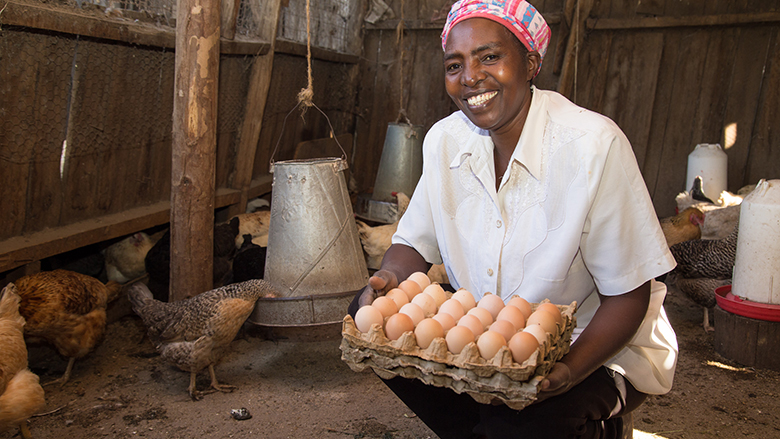 Poultry farmer Mercy Wairumu has transformed her farm into a thriving, climate-smart business with support from KAPAP.

A barrage of squawks greets Mercy Wairimu every time she steps into the two story chicken coop that stands in her backyard. The poultry farmer from Nakuru County in Kenya beams. The noise from her chickens, which number in the hundreds, reminds her of how far she’s come.

“I have been in this business for ten years now. I used to have a few small indigenous chickens here and there, running around my compound,” explains Mercy. “But then the Kenya Agricultural Productivity and Agribusiness Project (KAPAP) came. It expanded my mind and my business. I now have 1000 birds.”

The KAPAP is a Government of Kenya initiative supported by the World Bank whose aim is to improve agricultural productivity and the incomes of smallholders. It does so through a range of activities, including supporting research and developing agriculture value chains. Farmers have benefited from KAPAP’s provision of new technologies, improved market access and climate-smart agriculture approaches especially in dairy farming, potato and pea cropping, apiculture and poultry rearing, to name just a few. Some of the beneficiaries have even expanded their operations to practice more than one type of farming.

“Agriculture means jobs in Kenya. After all, more than 75% of Kenyans make a living in agriculture,” says Dina Umali-Deininger, Africa Practice Manager with the Agriculture Global Practice at the World Bank.  “Supporting farmers so that they can earn good incomes and help build a sustainable, climate-smart food system is crucial to driving economic growth and boosting shared prosperity in Kenya.”

" Supporting farmers so that they can earn good incomes and help build a sustainable, climate-smart food system is crucial to driving economic growth and boosting shared prosperity in Kenya. "

In Nakuru County, KAPAP works with a farmers’ co-operative society to improve the poultry value chain. Mercy is one of the society’s two thousand plus members who has benefited from training on sustainable poultry: rearing techniques; the provision of vaccines, and the introduction to the  improved ‘Kroiller’ chickens.

The indigenous chickens she used to raise were smaller, and took between six months to one year to breed. The new, improved Kroiller chickens are fully grown after four and a half months, weigh between four to six kilograms once fully-grown, and they start breeding in less than six months. According to Mercy, the improved chickens also lay larger eggs almost every day. Vaccinations—against devastating diseases like Newcastle—also help guarantee that more chicks survive, and become fully grown. The new chickens are quite resilient, that according to Mercy, every so often,  if she hatches 200 chicks, 195 of them  become fully grown.

Mercy’s poultry farm is also climate-smart and makes sustainable use of resources. Poultry is recognized for being among the "greenest" meats, using up less resources and emitting less greenhouse gases than larger livestock. Mercy’s chickens eat kale grown on her farm, and are less reliant on store-bought feed that’s produced elsewhere and carries a larger environmental footprint. She also uses bird droppings as fertilizer on her crops, and practices agroforestry, growing bananas and fruit trees on her poultry farm.

KAPAP has helped poultry farmers become better entrepreneurs by advising them on how to grow their brand and connecting them to bigger markets. Mercy says that  that they  used to sell their  chickens and eggs to friends and neighbors, but KAPAP introduced them  to bigger markets. “Now we sell our eggs in supermarkets. They also taught us about advertising and marketing,” Mercy says. Through their co-op, the Nakuru poultry farmers can command better prices for their eggs and shelf space in Nakumatt supermarket and other popular grocery stores. They can also purchase inputs, such as vaccines and vitamins, at higher volumes and for a lower price.

Thanks to her success as a farmer and entrepreneur, Mercy’s family has inched towards greater prosperity over the years. She is a  mother of three and she says that she does  not have any other income, but she relies on farming. One of the children is a 4th year at the Jomo Kenyatta University of Agriculture and Technology while the other is  in boarding school. She has been able to educate her children through  poultry business,” “I’m a happy farmer,” she explains proudly. 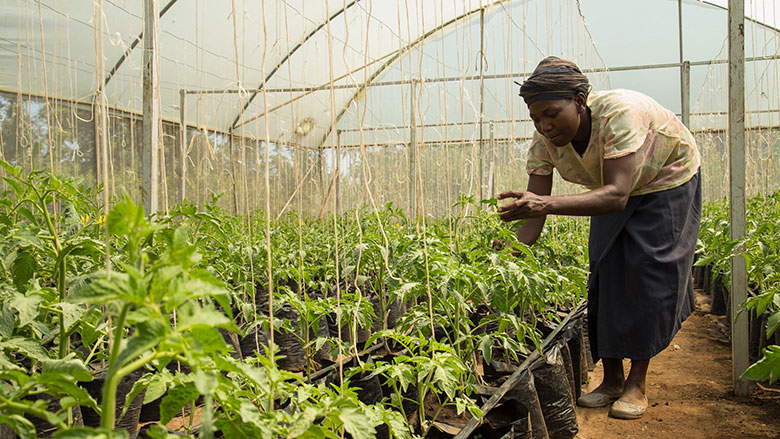