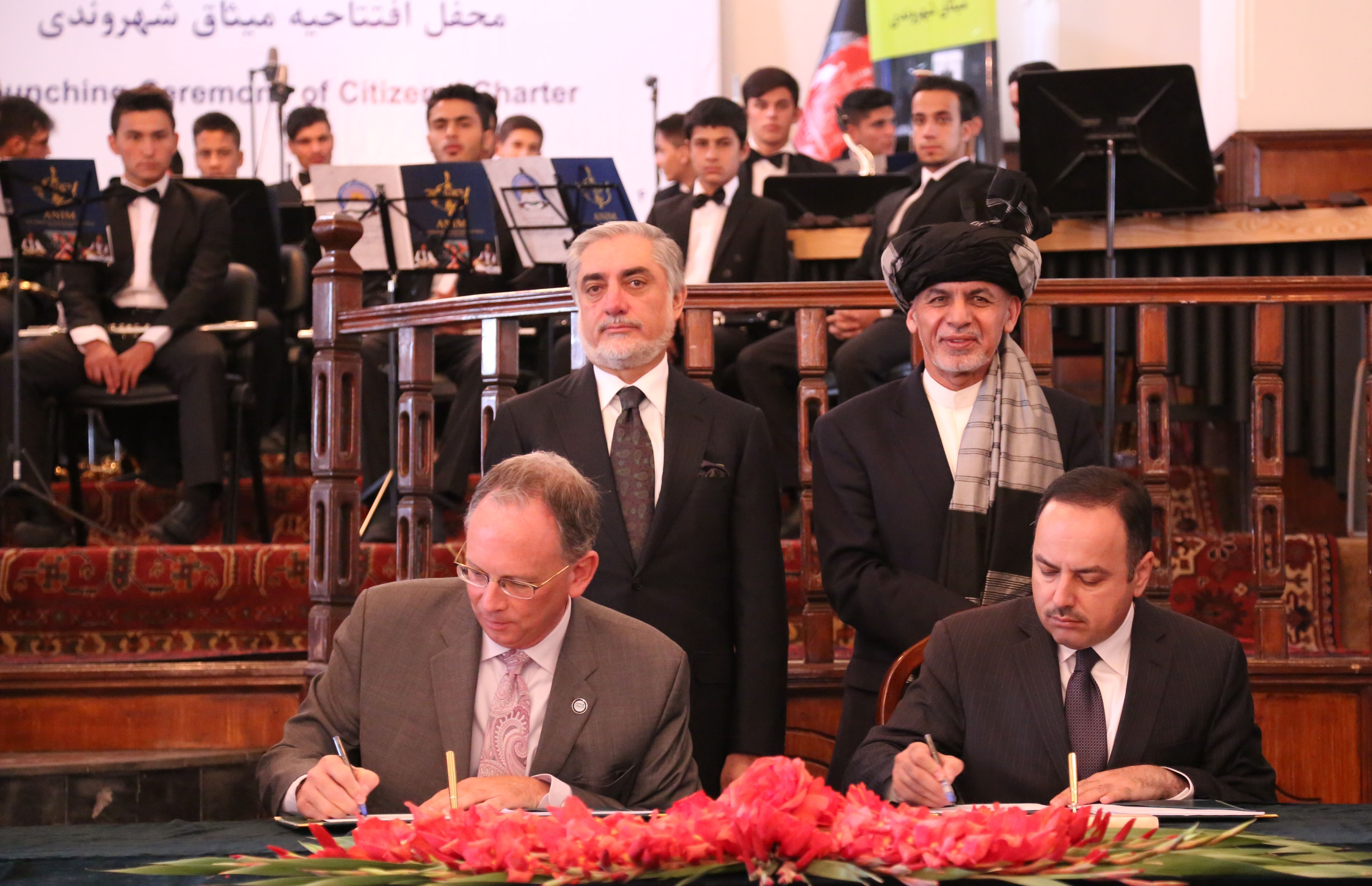 The Citizens’ Charter Afghanistan Project, launched on 25 September, 2016, saw the signing of a Financing Agreement for an ARTF grant between the Ministry of Finance and the World Bank, as ARTF administrator. President of the Islamic Republic of Afghanistan, Mohammad Ashraf Ghani (standing right), and Chief Executive, Abdullah Abdullah, witnessed the signing between Minister of Finance, Eklil Ahmad Hakimi, and World Bank Country Director.

KABUL CITY – The air in the Presidential Palace’s Salam Khana is filled with the music of a well-known patriotic song, which captures the audience’s attention and hearts. The student ensemble of the Afghanistan National Institute of Music is playing the famous song—My country, loving you is my pride —by Abdul Wahab Madadi.

The President and the Chief Executive of Afghanistan, cabinet ministers, and over 400 representatives from the donor community, international organizations, and Community Development Councils (CDCs) from all 34 provinces of the country have gathered at the palace on 25 September, 2016, to inaugurate the Citizens’ Charter Afghanistan Project (CCAP).

Underlining the need for good governance and accountability, President Mohammad Ashraf Ghani said in his address at the inauguration ceremony: “We will change the culture of governance through rural and urban development councils and will bring fundamental reforms in Afghanistan. Accountability will be the main working principle in the CCAP, and we will eradicate corruption through accountability in Afghanistan.”

The objective of the CCAP, in effect a social contract between the government and CDCs, is to improve the delivery of core infrastructure and social services to participating communities through strengthened development councils. These services are part of a minimum service standards package that the Government of Afghanistan is committed to delivering to citizens.

Hafizullah, from Laghman province, who also spoke at the ceremony, lauded the project’s objective. “In the past our people knew little about the projects that were carried out in our villages [except the ones implemented by the Ministry of Rural Rehabilitation and Development] and those projects did not always reflect people’s needs and priorities,” he said. “Since the CCAP aims to implement development projects of several ministries, they will be more effective and beneficial.”

The CCAP which will run over four years, is planned to have a total budget of $628 million. At the ceremony, the Ministry of Finance and the World Bank, as the Afghanistan Reconstruction Trust Fund (ARTF) administrator, signed a Financing Agreement for a grant of $400 million provided by donors through ARTF. The government is expected to co-finance with $128 million from its own resources. The remaining $100 million grant from the International Development Association (IDA), is expected to be approved by the World Bank Board of Executive Directors later this month.

The project will support the first phase of the government’s 10-year Citizens’ Charter National Program, and will target one third of the country. In addition, as part of its contribution to urban development, the program will initially focus on four cities—Balkh, Herat, Kandahar, and Nangarhar.

The CCAP aims to reach 8.5 million people in the first phase. The goals include providing 3.4 million people access to clean drinking water; improving the quality of service delivery in health, education, rural roads, and electrification; increasing citizen satisfaction and trust in government; and a 35 percent return on investment for infrastructure projects. It will aim also at better integration of internally displaced citizens, persons with disability, poor people, and women.

“The CCAP represents the National Unity Government’s will to deliver on its promises to the people,” said Dr. Abdullah Abdullah, Chief Executive of Afghanistan, at the inauguration ceremony. “It brings a good message of accountability between the people and the government. The program’s success depends on the people’s partnership. The program will facilitate the connection between villages and cities, and provide the grounds for stability. The Citizens’ Charter Program will eliminate the problems of lack of communication between ministries in implementing projects.” 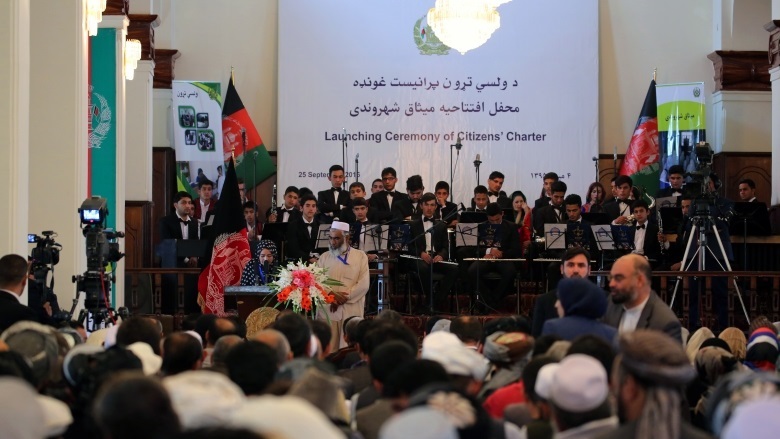 The student ensemble of the Afghanistan National Institute of Music played at the ceremony. The inauguration of the CCAP marks the end of the National Solidarity Programme (NSP), through which more than 35,000 CDCs throughout the country played a major role in implementing rural projects and solving conflict and problems in their communities.

Photo Credit: Rumi Consultancy / World Bank
" Accountability will be the main working principle in the CCAP, and we will eradicate corruption through accountability in Afghanistan.  "

The inauguration of the CCAP marks the end of the National Solidarity Programme (NSP), through which more than 35,000 CDCs throughout the country played a major role in implementing rural projects and solving conflict and problems in their communities.

“We have learned well from our 13 years of experience,” said Engineer Durrani, in his speech at the inauguration ceremony. “Under the CCAP, Afghans will receive similar services, and the development in the country will be balanced, transparent, and based on mutual accountability.”

Under the CCAP, the CDCs will be entrusted with even greater responsibilities. Through the project, they will work to reduce poverty and bring prosperity to their communities. Each CDC will implement development projects of the ministries of Rural Rehabilitation and Development, Agriculture and Livestock, Health, and Education.

Parallel to the work that rural CDCs will carry out, urban community development councils, created under the municipality framework by the Independent Directorate of Local Governance (IDLG), will also implement environmental and greening projects, roads and drainage improvements, women’s livelihood projects, and potable water and electricity provision in their communities. Both urban and rural development councils are responsible for monitoring project implementation, maintenance, and accountability, as well as building relations with the government.

Another CDC representative, Mudaqiq from Samangan Province, recognizes the important responsibility entrusted to them. “We will do our jobs honestly and with full responsibility,” he says. “We will also stay committed to be accountable to every penny we spend.”

The CCAP will require 50 percent of the CDC to be women. The councils themselves will be responsible to ensure equal share and participation of women in their structures and activities.

Razia, from Ghazni Province, is happy that the CCAP is committed to gender equity. “We will try to increase the role of women at CDC leadership levels,” she says, “so that women will find more opportunities to express their opinions and the level of violence against them would ultimately go down.”

She finds support from other CDC representatives, such as Rahelah from Bamiyan Province.

“Through the Citizens’ Charter Program we will work with widows and poor women to alleviate their inadequate living conditions. We also will promote education for children among families,” she says.

The World Bank Country Director for Afghanistan, Robert Saum, in his statement at the inauguration ceremony said: “We would like to congratulate the government and Afghan people for the launch of the CCAP. Today is truly a day of optimism for all Afghans. The ministries have worked tirelessly for the preparation of this program. Your voice is important and your voice was heard in consultation meetings with ministries, NGOs, and donor communities. Your voice is reflected in this program. The CCAP is being built on your successful community development initiatives undertaken under the NSP in the past 13 years. It was our privilege to support the NSP and now it is our privilege to support the Citizens’ Charter. We anticipate the CCAP will contribute to poverty reduction in this country by improving the access of citizens to a full package of services through enabling CDCs to identify their needs. We expect to see CDCs monitor the quality of health clinics and schools through the projects.”