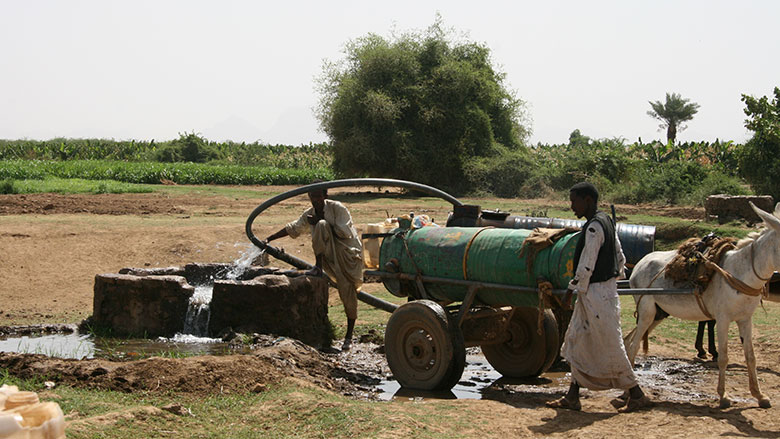 Two Sudanese farmers irrigate their plantations in Kassala State. They are able to earn a living with help from micro-grants from the Sustainable Livelihoods for Displaced and Vulnerable Communities in Eastern Sudan Project.

KASSALA, August 10, 2016 – Khadiga Mohammed, a Sudanese single mother in her forties, remembers all too well her days of poverty. They were, after all, not that long ago.

She painfully recalls how, in 2015, she had to explain to one of her seven children that the reason she couldn’t buy them milk every night is because she “can’t afford to.”

Back then, Khadiga’s family survived on the small income she earned selling an assortment of local nuts in front of schools in the village of Tajooj in eastern Sudan. She would come back home at the end of the day with only 40 Sudanese pounds (approximately $6) which was not enough to feed her family. As her situation worsened, two of her sons had to drop out of elementary school because she could no longer pay the fees.

But thanks to her entrepreneurial spirit and support from the Sustainable Livelihoods for Displaced and Vulnerable Communities in Eastern Sudan Project (SLDP), her life today is markedly different. Khadiga’s home bustles with dozens of kids playing on two sets of playground swings and a set of video game systems that she rents out for a small fee. These assets were made possible through support from the SLDP, the first phase of which was funded by a $3.08 million World Bank-managed grant from the State and Peacebuilding Fund.

As a result of the project’s intervention, Khadiga’s daily income has more than doubled to 90 Sudanese pounds (approximately $14). The first thing she did with the increased income, she said, was to send her boys back to school.

Eastern Sudan, where an estimated 1.35 million people and about three million cattle live, is one of the most arid and poorest parts of Sudan. Most of the region’s population are cattle herders and farmers with 80% earning their living from subsistence farming. A peace deal in 2006 ended 12 years of a low-intensity conflict but the region remains insecure.

In addition to frequent reports of arms and human trafficking, Eastern Sudan is also a transit hub for migrants attempting to reach Europe via smuggling routes leading northwest into Libya. According to the UN Refugee Agency (UNHCR), Sudan hosted approximately 460,000 refugees and asylum seekers by the end of 2015. While nearly one quarter are from Eritrea, this group also includes an estimated 100,000 Syrian refugees.

Since its inception in October 2013, the project’s first phase has undertaken a wide range of livelihood activities in six IDP and host communities in the region, benefiting 911 households. 86% of the households that received livelihood assistance under the project increased their monthly income by 59.5%.

Before the project, Ammona Salih earned a meager income of 30 Sudanese pounds a day (approximately $5) from selling tea and harvesting okra. She and her farmer husband struggled to put enough food on the table for their nine children. “Even if we had managed to buy enough food at the end of the day, we would have no money left to buy water,” she said.

Through an SLDP micro-grant, Ammona received kitchen utensils, 16 chairs, fout tables, two gas cylinders, a water container, and a donkey cart. She used these items to set up a restaurant, which now generates a daily income of 80 Sudanese pounds, more than double her previous earnings. She put the increased income towards renovating her house and sending her children to school.

Besides livelihood activities, SLDP also supported the rehabilitation of several small community-level assets which go beyond the targeted households to benefit the community at large. In Tajooj, for example, the project managed to mobilize the community to crowd fund the repairs of a water tank and pump which had been broken for almost five years.

“Water was a really difficult issue here. People used to toil to bring the water in small containers from seasonal rivers” says Faiza Ramadan, the project’s community facilitator. “Al-Hamudillah (Thank God)! Because of this work, water is now available in our village.”

The SPF has approved the second phase of the SLDP in the amount of $4.4 million and activities are due to start in the fall of 2016. The second phase is expanded in scale and scope to target the remaining 10 official Internally Displaced Persons (IDP) settlements in Kassala State, and their host communities. Along with an improved livelihoods delivery scheme, the project will aim to build the capacity of beneficiaries to plan and implement a portfolio of small scale work aimed at mitigating and adapting to the effects of climate change in their communities.

The focus of the new project recognizes the rural poor’s tremendous reliance on the environment as a source of livelihoods and income. It also responds directly to the needs and priorities expressed by beneficiaries and local stakeholders during the implementation of the SLDP.  In addition to building on the results of the SLDP, this new initiative will complement the World Bank Group’s growing portfolio of projects in Sudan related to environmental management and climate change, and help contribute to the objectives of the 2015 United Nations Climate Change Conference in Sudan.