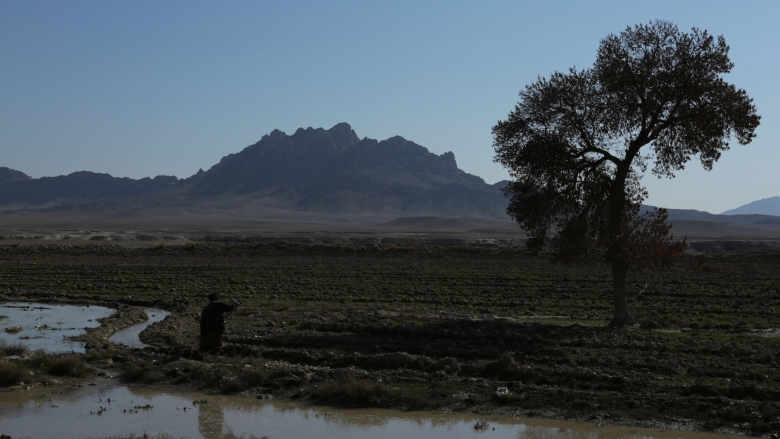 Agricultural production has increased as the farmers are now able to cultivate areas of their land that were previously uncultivable because of the lack of irrigation.

DAMAN DISTRICT, Kandahar Province – The sun has not yet risen, but farmer Hayatullah is already hard at work on his farm. He is collecting gravel and preparing the land for the next round of cultivation. It is hard work but he has seen worse times.

“Since our village is located at the end of the water canal, water could not reach our farmlands before the canal intake gate was built. Our farmlands remained dry so we could not grow enough crops, and village residents stayed poor,” says Hayatullah in Kandahar Province.

Agricultural production has increased as the farmers are now able to cultivate areas of their land that were previously uncultivable because of the lack of irrigation. “Now farmers cultivate the abandoned farmlands—those they could never imagine would become cultivable one day,” says Haji Mohammad, Community Development Council. “They actually harvest a good amount of crops from those lands.”

The rehabilitation of the irrigation system was carried out under the Irrigation Restoration and Development Project (IRDP) at a cost of 14.8 million afghanis ($215,000). IRDP operates under the umbrella of the Ministry of Energy and Water (MEW) in six regional offices: Kabul, Herat, Jalalabad, Kandahar, Kunduz, and Mazar-e-Sharif. The project is supported by the International Development Association (IDA), the World Bank Group’s fund for the poorest countries, and the Afghanistan Reconstruction Trust Fund (ARTF), in partnership with the Government of Afghanistan.

The Spin Wala Canal is 23 kilometers long and could only irrigate 7.4 hectares of farmland.

Photo Credit: Rumi Consultancy/World Bank
" Now farmers cultivate the abandoned farmlands—those they could never imagine would become cultivable one day. They actually harvest a good amount of crops from those lands.  " 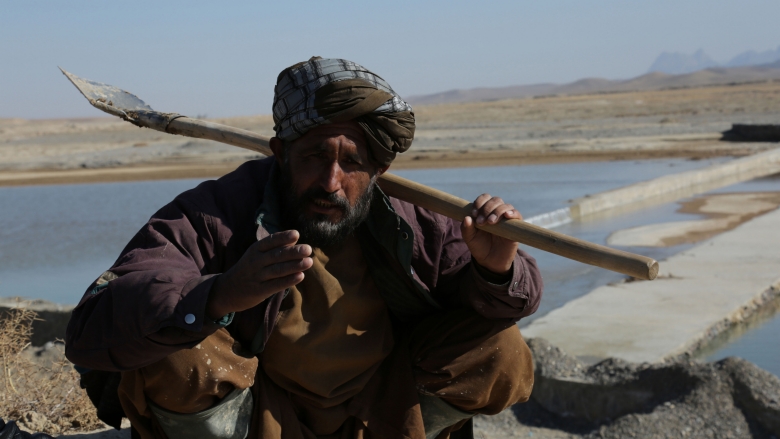 Farmers are able to harvest five kherwars (2.8 tons) of wheat instead of one kherwar (560 kilograms) from the same crops. It makes life easier for the farmers and their families since they are now able to cover family expenses.

Before the canal was paved with concrete, villagers built a weir to channel water from the canal to their farms every year. “People used to build a weir every year with mud and local materials, which were easily destroyed by water torrents, resulting in many farmlands going dry,” recalls Mohammad. “Also, rebuilding the weir every year was costly for the villagers.”

About 750 households have, thus, benefited from the rehabilitated irrigation system in Daman district, which has resulted in higher incomes and living standards for villagers in Azam Kala and the neighboring villages of Kakaran, Lawarkhuna, and Erhaad. Their farms have also seen a significant increase in agricultural productivity.

One such beneficiary is farmer Zainullah, a resident. “Ever since the canal intake gate was built, the productivity of my farmland has greatly increased. I am able to harvest five kherwars (2.8 tons) of wheat instead of one kherwar (560 kilograms) from the same crops,” he says. “I can easily cover my family’s expenses, and my children attend school with a peaceful mind.”

Farmers and their families are not the only beneficiaries of the improved irrigation system. In the neighboring village , farm hand Mohammad has been working for a landowner for 20 years. He has cultivated wheat, maize, and cumin on the farm, which has yielded a good amount of crops as a result of the increase in arable land. “In the past, I harvested around five kherwars of crops, but in the last three years the harvest has been over 20 kherwars (11.2 tons) each year,” says Mohammad. “As a result, my salary also has increased.”