Not So Simple: Why Air Pollution Numbers Keep Changing 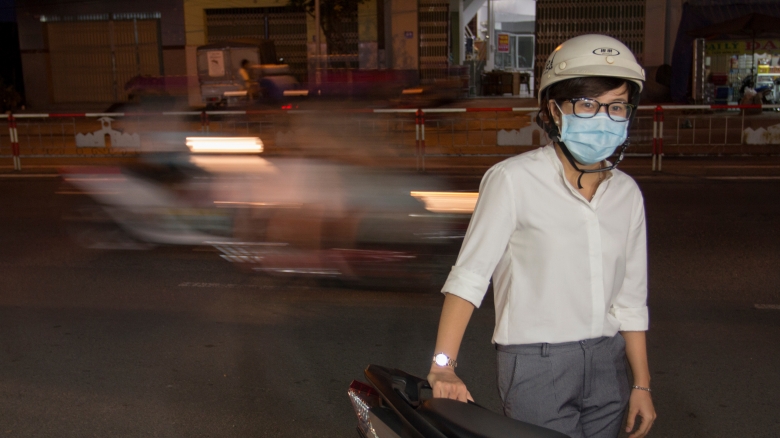 Air pollution data published in the Little Green Data Book last year generated wide interest -- and a bit of alarm. Could the United Arab Emirates really be the most polluted country on earth?

The data, measuring mean annual exposure to dangerously small particulate matter – PM 2.5 -- was drawn from the Global Burden of Disease Study 2010 (GBD 2010), an international research effort led by the Institute for Health Metrics and Evaluation (IHME). Its inclusion in the Bank’s annual compilation of environmental data represented a significant advance over previous numbers. Previous editions of the Little Green Data Book included exposure data for larger particulate matter (PM 10), now deemed less relevant by the health community as it is mainly its PM2.5 fraction that penetrates deeply into people’s respiratory tract. Moreover, PM10 is only reported for pollution in urban areas with more than 100,000 people.

The GBD 2010 data, however, came with a few caveats. Although the data represented a step forward in understanding the scale of air pollution-related health risks globally and allowed comparisons across countries, the methodology had a number of limitations. The data at times under-reported pollution in countries where particulate matter concentrations were known to be high, and vastly over-reported pollution in desert countries affected by mineral dust.

As a result, PM 2.5 concentrations, measured in micrograms per cubic meter, was reported as 80 for the United Arab Emirates (UAE), ahead of China’s 73 figure – and eight times the PM 2.5 concentrations deemed safe by the World Health Organization (the guideline value is 10 micrograms/m3). Mongolia was another anomaly: while the capital Ulaanbaatar is known to have some of the highest PM2.5 concentrations ever measured, the average population-weighted PM2.5 concentration was reported to be 9 only.  This result may be due to the vastness of Mongolia, relative to its small population (2.8 million people), even if half the population lives in Ulaanbaatar. Another explanation may be that pollution in Ulaanbaatar is highly variable spatially, and that satellite observations are limited to relatively cloud-free days – while in the winter, when pollution is high, the sky is more overcast.

Another disadvantage was that the data was relatively old, based on extrapolating trends from 1990 to 2005, in a fast evolving field. Awareness of the deadly impact of air pollution – estimated to be the fourth leading cause of death worldwide – has grown in recent years, and governments have intensified efforts to both monitor and curb pollution to protect public health. Diseases related to indoor and outdoor air pollution claimed an estimated 5.5 million lives in 2013.

This year’s Little Green Data Book data comes from the Global Burden of Diseases, Injuries and Risk Factors Study 2013 (GBD 2013), the most recent source of globally consistent data and an update of GBD 2010. This edition draws on satellite estimates combined with a larger set of available ground-level data, and augmented by literature review and contact with experts worldwide, to improve the reliability of satellite-based concentration estimates.

Globally, GBD2013 confirms that air pollution is indeed a growing problem. The number of people exposed to dangerous levels of pollution has increased by almost half since 1990, and 90% of the world’s population in low and middle income countries now lives in areas that exceed WHO air quality guidelines. 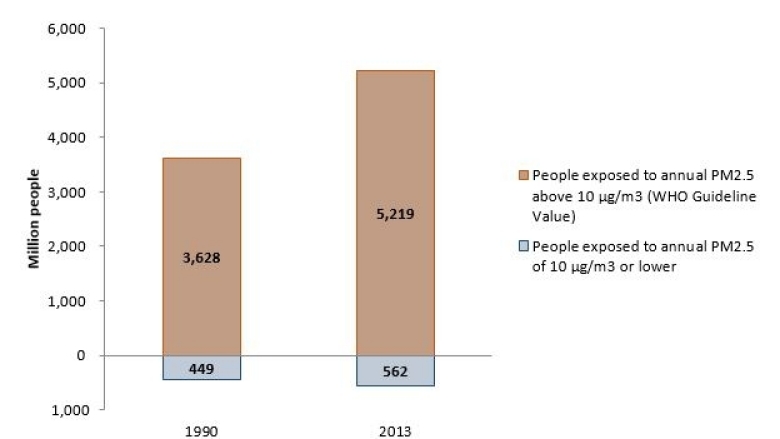 Country-level PM 2.5 data reported for the year 2010 has evolved with improvements in the GBD methodology: 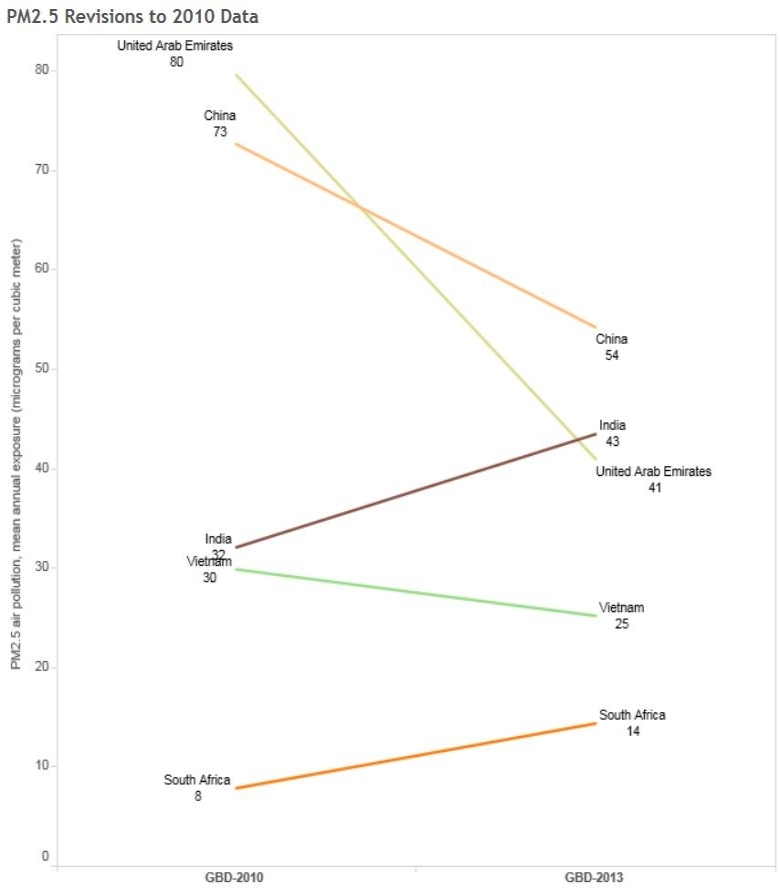 Here is what long-term PM 2.5 exposure trends look like for those same countries, based on the GBD2013 data: 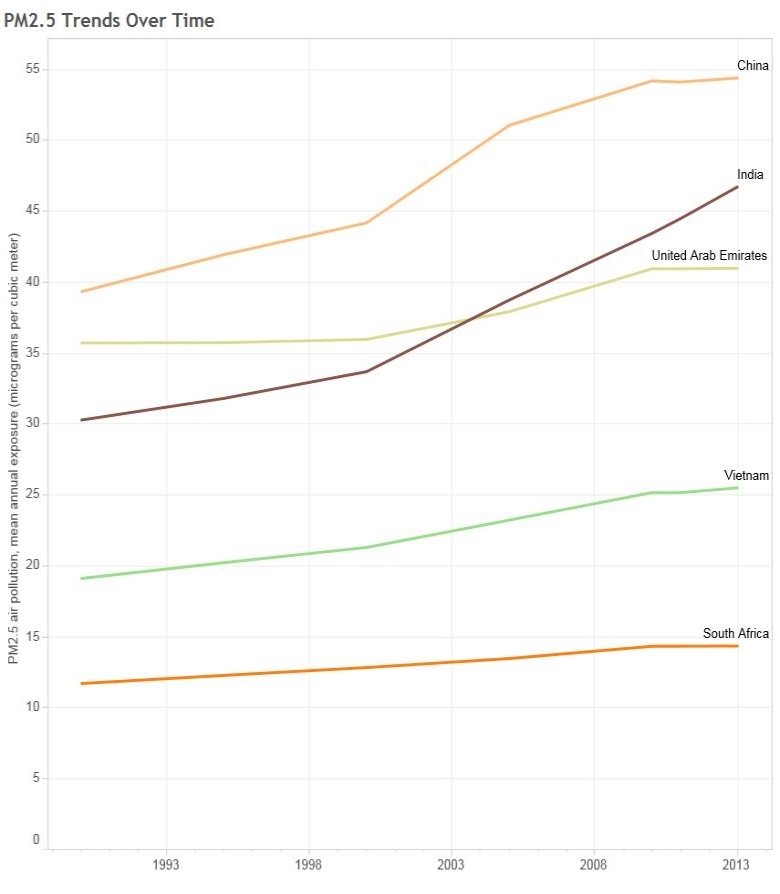 While the GBD2013 data shows some of the highest PM 2.5 exposures in the Middle-East and North Africa region due to the presence of mineral dust, northern India and eastern China are also identified as critically polluted regions, as expected.  Furthermore, changes in exposure levels within India match trends identified by environmental agencies based on ground level monitors.  However, a number of data anomalies remain in the GBD2013: Mongolia appears nine times less polluted than Mauritania, which is incorrect; estimates for mountainous and desert countries continue to be unreliable , particularly where ground level monitoring data is absent (as is the case in Mauritania, Mali and Niger for example).

Experts agree that further substantive investments in ground-level monitoring equipment are needed to help fine-tune pollution estimates, better understand pollution sources, and guide cost-effective responses at the national and city level. At the same time, combining satellite-based estimates with ground level data may be able to reduce the overall cost of monitoring pollution by reducing the need for as dense a ground monitoring network.

Through the World Bank-led Pollution Management and Environmental Health program, researchers will be working to bring satellite data and ground level monitoring data increasingly in agreement in a number of cities. Moreover, the PMEH program will study health impacts of natural fine dust in selected parts of the Sahara, an area that remains under-researched, to allow comparisons with the toxic effects of combustion-based fine particulate matter.