State of the Africa Region: The Time to Reform is Now 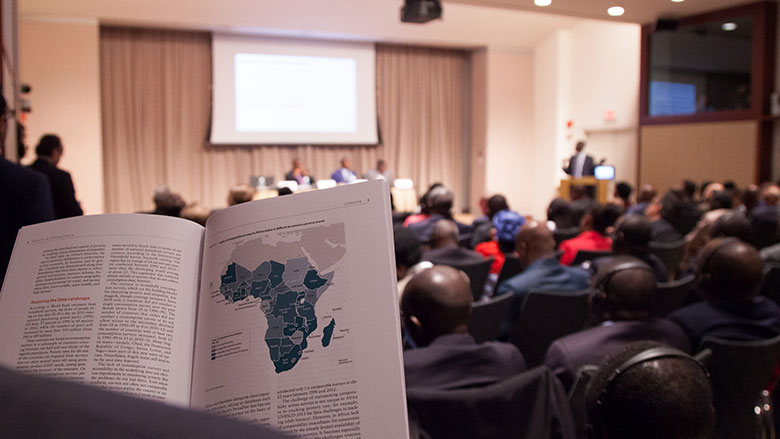 Government delegations, development partners, members of public and private sector, business leaders, and media gathered for the State of the Africa Region, based on data from the recently-released Africa’s Pulse economic analysis.

This was the message from World Bank Africa Vice President Makhtar Diop in his State of the Africa Region address during the World Bank-IMF Spring Meetings.

“Despite weak global growth, a difficult external environment facing Sub-Saharan Africa in the near-term, and low and volatile commodity prices, this worsening situation also presents us with a significant opportunity to transform Africa’s economies,” Diop said. “It has signaled an urgent need for economic diversification in Africa.”

Using data from the recently-released Africa’s Pulse, Diop led a panel discussion with a presentation highlighting challenges and opportunities for countries in the short and medium term. The panel included Louis-Paul Motazé, Cameroon’s Minister of Economy, Planning and Regional Development and Claver Gatete, Minister of Finance and Economic Planning for Rwanda.

According to the latest World Bank projections, Sub-Saharan Africa’s gross domestic product (GDP) growth slowed to an estimated 3.0% in 2015 from 4.5% in 2014. This low pace of growth was last seen in 2009 following the global financial crisis.

The fall in commodity prices represents a significant shock for the region, as fuels, ore and metals account for more than 60% of the region’s exports. The impact is seen most in oil-exporting countries, such as Nigeria, the Republic of Congo, and Equatorial Guinea. Activity also weakened significantly in non-energy mineral-exporting countries, including Botswana, Sierra Leone, South Africa and Zambia.

“In order to start tackling challenges we are facing, we have no other choice but to increase domestic resource mobilization, remove trade barriers, improve education, invest in agriculture and renewable energy,” Diop said.

“What helped us leap frog is the digitalization of the economy,” Gatete said. “ICT is part of almost everything in Rwanda today. It is transforming our lives, people are paying by phone and we are moving very fast in that area. We have also been improving the efficiency of tax collection and put in place policies to improve regional integration between Kenya, Uganda and Rwanda, eliminating all unnecessary costs and hurdles for transporting goods.”

With commodity prices expected to remain low for longer amid a gradual pickup in global activity, the Pulse forecasts that average growth in the region will remain subdued at 3.3% in 2016. For 2017–18, growth is projected to average 4.5%.

“In Cameroon, despite all the efforts we make, the results are still not good enough, as there are so many challenges we are facing. Security is one of them, which leaves us with less resources for other areas,” said Motazé. “That is why specialization is very important for us. For example, in education, we need to train a critical mass of students in specific areas that the country actually needs, and this, in turn, will help us transform our economy. We are determined to put in place all the right policies to help the situation, but we need all the partners to work with us in order to succeed.”

Africa’s Pulse finds that well-managed cities provide a major opportunity for much needed economic diversification. Today cities in Africa are crowded, disconnected, and costly for families and for companies, according to World Bank research. Cities must offer services, amenities, and housing for the poor and the middle class. Successful urbanization will also support Africa’s agricultural and rural transformation by effectively absorbing the labor being released by these sectors; by providing a market for agricultural produce; and by financing further transformation and commercialization.

“These are not small tasks, and they require reforms that will not be easy – they will require commitment and courage on the part of Africa’s leaders. The cushion that high commodity prices provided to many countries is now largely gone. We are here to work with you and to support you,” closed Diop.