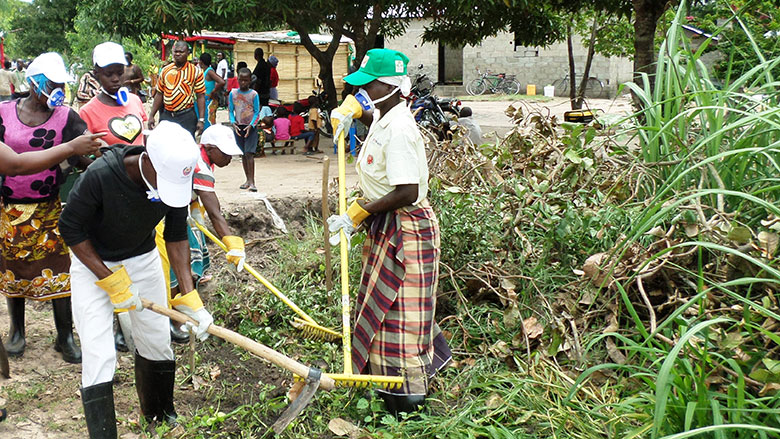 ZAMBEZIA PROVINCE, February 16, 2016 – With a population of about five million, Zambezia is the second most populous province in Mozambique and the poorest with a poverty rate of close to 70%. To help foster economic inclusion in the province, the government chose Zambezia as the launching pad for its Productive Social Action Program (Programa de Acção Social Produtiva, PASP). Through the Social Protection Project, the program receives $50 million in World Bank funding,   to provide temporary income support to extremely poor households to help put in place the building blocks for a social safety net system in the country.

“Given the high poverty prevalence rate in the province, we want this program to succeed here,” said Verônica Luís, the government representative, during her speech at the recent national launch of PASP. “It’s in this province that the program has the largest number of beneficiaries among its 8,500 people countrywide.”

The Productive Social Action Program provides an income transfer to extremely poor households who have at least one adult member able to work. Support to beneficiaries in rural and urban areas are provided in return for their participation in labor-intensive public works subprojects. Through their participation in those activities, beneficiary households will be able to stabilize their income, begin regular savings and access to economic opportunities, linking them back to complementary activities such as community savings and financial literacy. The program also supports social inclusion through actions that facilitate household access to social services, especially health, education, and nutrition.

“We see this program as a foundation for us to reach more people and improve the impact of our work in people’s life,” said Mark Lundell, World Bank country director for Mozambique, during the program launch ceremony in Botão locality in Nicoadala District. “We are pleased to associate the Bank to such an initiative and we hope this will improve the life of beneficiary households, and contribute to the district’s economy and social cohesion through greater inclusion.”

Some of the activities executed by the rural communities may include:

Small-scale social services, such as child and elderly care can be also included, especially in urban communities. The program is also supporting food security initiatives, such as the recent preparation of about seven hectares of land for the production of maize in the district of Ile, further north in the province. Another example is the plantation of orange sweet potato in the district of Nicoadala.

“This program follows a rigorous criteria for the selection of its beneficiaries,” recalled José Bové, representative of the Nicoadala local district administration. “We listen systematically to the community through public consultations. The Consultative Councils and Localities Forums are some of the mechanisms used by the program to gather feedback and define investment priorities and potential beneficiaries.”

The number of program beneficiaries generally peaks during times of acute food insecurity, such as during the current rainy season, adding an emergency dimension to a program that already fulfils social and economic functions.