Nature as the First Line of Defense against Floods 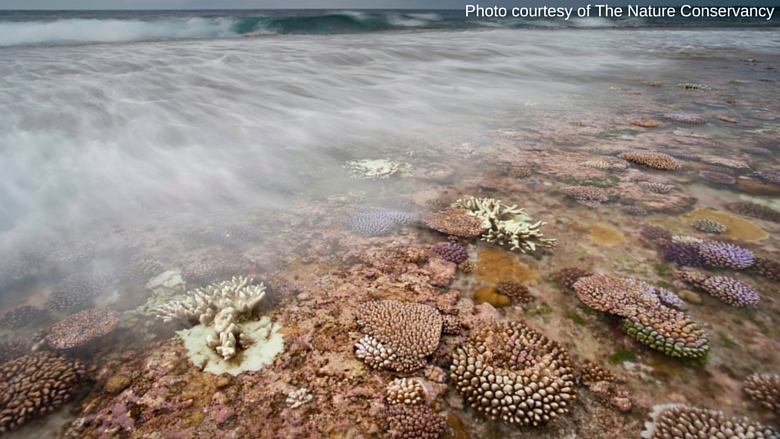 © Nick Hall. Photo courtesy of The Nature Conservancy
When it comes to protecting the world’s coasts, the best solutions may depend less on modern infrastructure, and more on rethinking how we value existing natural resources. A new report recommends using engineering and insurance models to re-evaluate the benefits of habitats like mangrove forests and coral reefs, instead of building walls against floods and rising seas.

It is well documented that , thus decreasing the risks of flooding and erosion. But until now, the economic argument for investing in such habitats has been less clear. Managing coasts with natural solutions: Guidelines for measuring and valuing the coastal protection services of mangroves and coral reefs seeks to address this evidence gap, and to reorient the cost-benefit analysis between built or “gray infrastructure,” and “green infrastructure” based on environmental processes.

Measuring and valuing services of mangroves and coral reefs

In a ground-breaking approach to measuring the benefits of ecosystem services, Lead Marine Scientist at The Nature Conservancy (TNC) Michael Beck - who co-led the report with Glenn-Marie Lange, Technical Advisor for the World Bank Wealth Accounting and Valuation of Ecosystem Services (WAVES) Global Partnership, with support from the University of California (UC) Santa Cruz, UC Davis, UC Santa Barbara, and Resources for the Future – applied assessment techniques commonly used in the engineering and insurance sectors.

Beck explained, “A typical way of valuing the flood protection benefit of coral reefs and mangroves is to ask, ‘If I lose those habitats, what is the cost of replacing them with a seawall or a breakwater?’ But learning from the engineering and insurance sectors, we can do a much better job of directly measuring the flood reduction benefit. By comparing the expected flood damages with the damages that would occur if reefs and mangroves were lost, we obtain a difference that represents the value of having those resources in place. This approach is known as the Expected Damage Function.”

The report demonstrates that . To date, the ecosystem services that have been highly valued for mangroves and coral reefs are provisioning services, such as how much fish production or timber a habitat can provide. This new work on flood reduction value is one of the very first, rigorous valuations of regulating services that can be done at a national and global scale.

A viable solution to an issue of global concern

The combined impacts of population growth, urbanization and climate change continue to make coastal defense more and more challenging. Worldwide, hundreds of millions of people are at risk from floods and extreme weather, and the economic cost of damages is rising steeply. Insurers have paid out more than $300 billion over the last 10 years just for coastal losses from storms.

By showing that the important protection characteristics of mangroves and reefs can be readily incorporated into economic planning tools like Natural Capital Accounting, Beck and the WAVES team hope that policymakers view these habitats as critical for coastal defense, and as cost-effective alternatives to vulnerable gray infrastructure. This will, however, require concerted efforts at a significant scale: by some estimates, 19 percent of mangroves were lost between 1980 and 2005*, and 75 percent of the world’s coral reefs are considered threatened**.

A track record of success

Despite the enormity of the coastal management challenge, momentum is growing in favor of restoring habitats to reduce risks from flooding and erosion. The Guidelines highlight over 20 case studies where the coastal protection roles of mangroves and reefs were reflected in major policy decisions, including:

“What we hope,” Beck said, “is that in addition to their intrinsic value, by showing decision-makers how important mangroves and reefs are as a first line of defense, we can really inspire more action, not just from conservationists, but from disaster risk managers, from development planners, and from ministries of finance and development.”