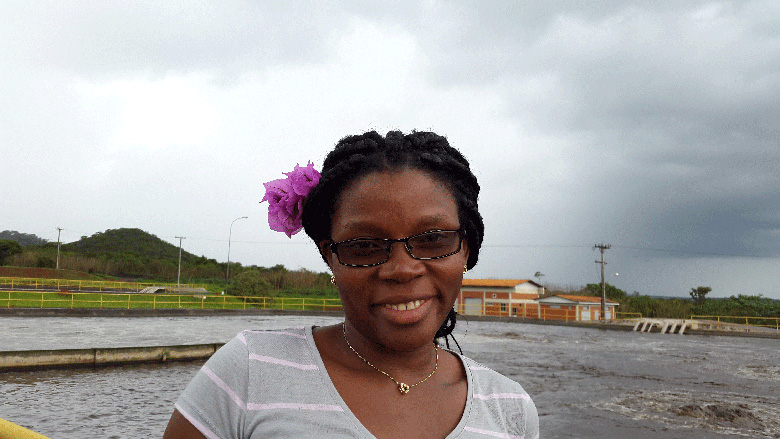 QUELIMANE, December 14, 2015 – Odete Muximpua is used to being a trailblazer. Raised in the small coastal city of Quelimane by her mother and grandmother, she is the first person in her family to have gone to college. This year, she also became Mozambique’s first homegrown woman engineer with a Master’s degree.

Women disproportionately lack access to higher education in Mozambique. UNESCO reports that in 2011, the country’s female gross enrolment ratio in tertiary education was just 3.73%. While this situation is mirrored across sub-Saharan African countries, Mozambique especially lags behind when it comes to women’s as well as overall youth enrollment in sciences, technology, engineering and math (STEM) disciplines.

Muximpua graduated her secondary school with outstanding grades. After graduation, she remembers being torn about choosing engineering until the last day to apply for university.

“Here in Mozambique, we have very few girls going into engineering. Most who attend university study social sciences or medicine,” she said.

Tertiary enrollments across Africa are heavily skewed toward the humanities and social sciences, with barely 25% of students opting for STEM subjects. Among those who do, few are women. It is this imbalance that PASET, an Africa-led partnership to promote Applied Sciences, Engineering and Technology education, is trying to remedy. PASET aims to build scientific and technical capability in Africa through initiatives such as a regional scholarship and innovation fund, and benchmarking of ASET programs at institutions.

"We need science and technology to fix Africa’s problems in agriculture, energy, health, infrastructure and challenges such as climate change," said Sajitha Bashir, the World Bank's Education Practice Manager for Eastern and Southern Africa. "This makes initiatives like PASET integral for African governments who now realize the importance of supporting science and technology education in the continent."

With encouragement from her school math teacher, Muximpua decided to study civil engineering, and applied to Eduardo Mondlane University in Maputo, Mozambique’s oldest and largest university. She topped the national entry exam, and in 2000, became one of just five women in a class of 55 students.

She ended up being the only girl in her class by the time she graduated, the others dropping out or unable to graduate in time.

“The boys respected me a lot,” she said. “I became head of the class, which gave me a lot of power!”

In her third year at university, Muximpua had a choice to study hydraulics or construction, a more popular choice among engineering students. She became the only one in class to specialize in hydraulics.

“I felt that water management was a challenge in my country and worldwide,” Muximpua  said. “I understood that it was a scarce resource, and I thought that’s where I could make a difference.”

In 2004 upon completing her BSc degree, Muximpua began working as a researcher at her university. She studied the sustainable use of water resources in wetlands and improving community water supplies. She also began undertaking projects to help local communities.

One of her earliest projects involved sanitation. For generations, households in Maputo would empty their toilets manually and bury fecal sludge in yards. As the city became denser, the practice became a public health hazard. Muximpua and her team helped the city council develop a fecal sludge management business model and trained private operators as well as local authorities. Now, the city has eight private operators to safely empty and transport feces to treatment plants.

Muximpua also trained community leaders, many of whom had never gone to school, in using the new system.

“I knew that it would be a challenge being a woman in some areas,” Muximpua admited. “But I was prepared. When I met them, I was humble. I did not act superior. I told them I was there to help.”

The community leaders became integral to the project’s success. With their encouragement, local households agreed to invest in improved facilities.

In 2007, Muximpua found an ad in the local paper that would lead her on a new professional path. The World Bank was looking for an analyst to assist work on Mozambique’s national urban water and sanitation strategy. Odete applied, and got the job. It was while working at the Bank that she returned to university to start her Master’s.

Muximpua’s academic success has inspired her mother, who studied until high school, to return to school. She is now working toward a graduate degree. She and Muximpua’s grandmother, who has a fourth grade education, are incredibly proud of her.

“To be a woman and engineer, to also be able to make a difference in some people’s lives, that makes them happy,” Muximpua said. “They hear from people how I helped them with their water and sanitation and they are proud.”

In April 2015, the World Bank approved an additional $45 million in financing for the Mozambique Higher Education Science and Technology Project, which builds Mozambique’s capacity in technical and vocational education. This funding builds on an earlier project which helped grow the number of higher education graduates in Mozambique from 7,000 to 11,000 from 2008 to 2015. Master’s graduates in STEM and agriculture increased by 150 in the same period.

"Africa today has the highest proportion of university students studying abroad," said Bashir. "Muximpua's example shows us that when students are given the opportunity to gain a quality education at home, they can make a real difference for their communities."