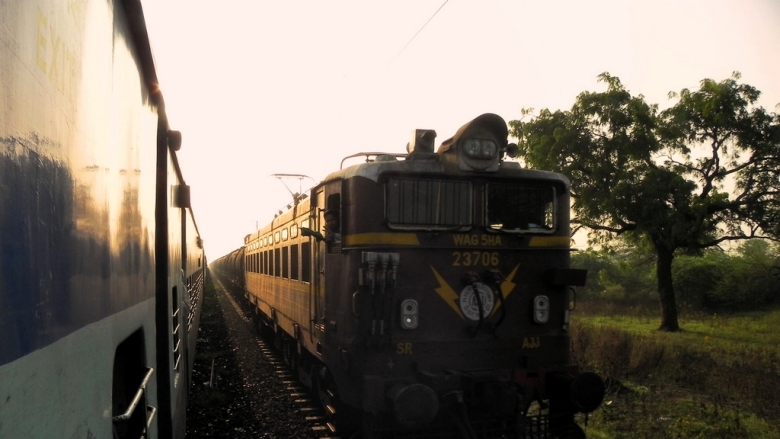 Rail travel in India is a critical part of people’s daily lives and a backbone of the country’s economy. Indian Railways handles 23 million passengers and 3 million tons of freight daily. At 64,600 kilometers, it is the world’s fourth largest rail network.

The India government is keen to grow the share of railways in land transportation by increasing physical capacity and the quality of its rail system. It is also committed to cutting its transport GHG emissions.

The World Bank is supporting India’s objectives through the Eastern Dedicated Freight Corridor project, which is one of several corridors connecting the main centers of economic activity – New Delhi, Mumbai, Chennai and Kolkata. Through a series of projects, the World Bank has provided the government of India with $US 2.725 in loans to build 1,176 kilometers of freight-only rail lines.

Through the Eastern Dedicated Freight Corridor project, rail lines that routinely carried 200 trains a day will carry 520. The lines will be able to carry heavy axle loads at higher speeds. Track speeds will more than double from the current 25 km an hour to an average of 60 km per hour.  Through investments in new track, state-of-the-art rolling stock, 178 high powered electric locomotives and 10,000 freight wagons, the project will create additional capacity of 600 metric tons. Reforms to the way the railways are managed and increased competition will also make service more reliable.

This new corridor is a freight-only rail line that will provide faster and more efficient movement of raw materials and finished goods between the northern and eastern parts of India. The corridor will also allow Indian Railways to free up space and better serve the large passenger market in this densely populated area.

Also of vital importance, over the next 30 years, the project will significantly cut greenhouse gas emissions.

Some of the new technologies planned for the freight trains and tracks are cutting edge.

The World Bank project is tailored to India’s specific needs and conditions, but is built on expertise gained from similar operations in China and the European Union.  As access to industrial hubs and markets improve, the rail lines will boost new regional and national development.

Planners and officials hope the project will be a catalyst for economic development in Uttar Pradesh and Bihar, relatively poor and underdeveloped states in India.

“The direct impact on the lives of ordinary people will be felt in reduced congestion in the cities as more capacity is released from existing rail lines which currently have to carry both freight and passengers,” says Aritua. “This will lead to communities along the corridor having better access to employment opportunities, health, education and other social services.”