The Jirga held from October 31 - November 2, 2015 was to raise the awareness of CDC members on future government programs to be implemented through the National Solidarity Program.

KABUL – Community Development Councils (CDCs) will be given more responsibilities to ensure greater development in rural areas, based on their success in bringing prosperity to their communities.

“We do recognize your tireless efforts at the village level and, therefore, the Afghan government has decided to delegate further responsibilities to you [CDCs],” Naseer Ahmad Durrani, Minister of Rural Rehabilitation and Development, told the more than 500 delegates from 34 provinces attending the Fifth National Consultative Jirga (conference) of Community Development Councils in Kabul.

“This means that the government is serious and recognizes your important role and brilliant performance in the past in giving you even more responsibilities,” he said.

The Jirga, held from October 31 to November 2, 2015, was organized by the Ministry of Rural Rehabilitation and Development (MRRD), which is responsible for implementing the National Solidarity Program (NSP), the Government of Afghanistan’s flagship program for development. The purpose of the Jirga was to raise the awareness of CDC members on future government programs to be implemented through NSP.

The large gathering in Afghanistan’s biggest hall, the Loya Jirga hall, reflected NSP’s success in bringing development to rural and isolated communities across the country. “Looking at various reports and media analysis, both locally and internationally, I can proudly say that NSP has received wide recognition as one of the most successful programs in the country,” said Ghulam Rasoul Rasouli, NSP Acting Executive Director. “Though many factors have contributed to the success of this program, among the most important factors are;- the participation of communities, consultation with villagers, and due supervision of projects, which has made the program a true success.”

Some 35,000 CDCs, established under NSP, have been instrumental in implementing over 80,000 MRRD development projects in their communities, leading to economic prosperity in entire Afghan villages. CDCs are found in about 85 percent of Afghan communities.

President Mohammad Ashraf Ghani addressed the Jirga on its second day. He told delegates that the government will maintain the momentum of development work and introduce a follow-on program - the ‘Citizen’s Charter’, after NSP comes to an end next year. “The upcoming Citizen’s Charter Program will sustain the work of CDCs by adding to their responsibilities as the sole competent government bodies in villages,” said President Ghani.

President Ghani lauded the effectiveness of the CDCs, and urged them to undertake more responsibility in the implementation of community-level development projects currently under other ministries and government institutions. “Now that our people are able to analyze their problems, all future programs of government ministries will be implemented through and by the CDCs in their respective communities,” he said.

Dr. Abdullah Abdullah, Chief Executive of the National Unity Government emphasized the importance of CDC members and their role in helping to create stability in the country.

Rumi Consultancy / World Bank
" “The Fifth National Consultative Jirga was a perfect opportunity to tighten the loose ends of the National Solidarity Program, refresh contacts with CDC members, and ensure transparency down the road.”  "

Minister of Rural Rehabilitation and Development

CDC's have enabled women to play a great role in local governance, not only educating them but also boosting their self confidence.

Dr. Abdullah Abdullah, Chief Executive of the National Unity Government emphasized the importance of CDC members and their role in helping to create stability in the country: “We have been witnessing a spirit of solidarity, trust, harmony, as well as a vibrant presence of the people at the Community Development Councils. Your cooperation with the government and your supervision of the projects have led to further transparency in local affairs. We need you for the stability and better future of the country.”

Dr Abdullah underlined the significance of local governance and the need for transparency. “When people participate in local governance, they can help the government… We want a better relationship between the local government and the councils,” he said. “Also for the sake of transparency of the councils, elections need to be organized in those councils where there have not been any.”CDCs have enabled women to play a greater role in local governance. Over 30 percent of the CDC delegates at the Jirga were women. “I can see that the capacity of women has improved—something I see among women participants at this conference, who have come from various provinces,” said Saleha, a delegate from Panjab district in Bamyan Province. “Such programs [CDC conferences] are very important for women as they not only educate them, but also help boost women's self confidence. Now, women play an almost equal part in many provinces of the country, particularly Bamyan Province, in resolving local issues.”

The government recognized the significant role CDCs play in enhancing women’s empowerment.  “We work with CDCs while developing our plans to tackle women’s issues. CDCs can channel women’s voice to the government,” said Delbar Nazari, Minister of Women’s Affairs. “We will keep pace with CDCs to address women’s issues and will promote the culture of understanding and coherence.”

Women’s issues and job creation will be addressed, said the minister. “We will launch projects to create jobs for women. CDCs will serve as a catalyst to make women heard at the Ministry of Women’s Affairs. Women’s participation is key to implementing projects in a better way.”

The three-day conference provided a platform for consultation with senior government authorities, donor partners, and CDC members from all over Afghanistan. “This Jirga was a crucial platform where we got firsthand information on the activities undertaken by CDCs, helped us learn about their issues, and seek solutions for those issues with their support,” said NSP Acting Executive Director Rasoul.

The Jirga also served as a platform for participants to share their views and recommendations to improve overall government performance, as well as share their concerns and suggestions on program implementation with the government.

Delegates were divided in 17 groups to discuss various aspects of their work and also share experiences with each other. There were lively and enthusiastic discussions on the strengths and weaknesses of the various projects, highlighting the intricacies of rural development activities. A spirit of harmony and collaboration was palpable among the participants, who had come from all over the country.

Gul Wali, 65, a delegate from Deh Bala district in Nangarhar Province said, “We had men and women from different provinces in my working group. The experiences from their provinces were valuable to me. I am so happy that I got to know my compatriots from other parts of Afghanistan.”

Delegates also expressed satisfaction with the relationship between CDCs and government. Hajji Mohammad Zaher, a delegate from Garmser district in Helmand Province, said: “The government has maintained a satisfactory level of coordination with people through CDCs, which is why the whole district enjoys great security. Indeed, it is the CDCs that have ensured the security in coordination with the government. People also are quite happy with this.”

After the intense discussions, delegates ratified a resolution of 14 articles on the final day, committing to continue the active work of the CDCs, ensure good governance, and enhance women’s empowerment, while calling for further government support to the CDCs.

MRRD Minister Duranni summed up the success of the Jirga: “The Fifth National Consultative Jirga was a perfect opportunity to tighten the loose ends of the program, refresh contacts with CDC members, and ensure transparency down the road.”

The National Solidarity Program (NSP), under the Ministry of Rural Rehabilitation and Development (MRRD) is in its third phase and aims to generate a strong sense of ownership and social stability while enhancing service delivery and security through empowerment and development activities that communities identify, plan, manage, and monitor on their own. It is supported by International Development Association (IDA) ), the World Bank Group’s fund for the poorest countries, Afghanistan Reconstruction Trust Fund (ARTF), Japanese Social Development Fund (JSDF) and a number of bilateral donors. 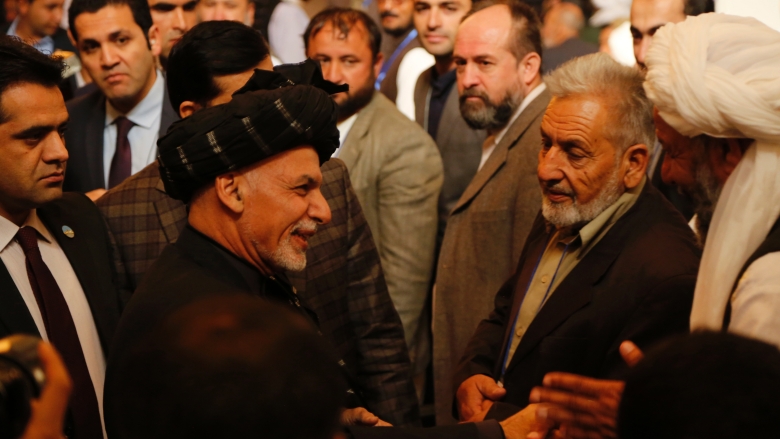