One week ago, the World Bank Group announced that the number of people living in extreme poverty was projected to dip below 10% of the world’s population in 2015 for the first time.

But as the 2015 Annual Meetings of the World Bank Group and International Monetary Fund came to a close in Lima, Peru, the focus shifted to the obstacles to ending extreme poverty and boosting shared prosperity: climate change, weak global growth, and ongoing crises in fragile states.

In its communiqué, the 25-member Development Committee of the Bank Group and Fund said economic risks have risen for 2015 and 2016. "Prospects of tighter financing conditions, slowing trade, and renewed weakness in commodity prices are weighing on confidence in many developing countries," it said. The committee called on the Bank Group and IMF to monitor economic risks and vulnerabilities and "enhance their assistance" to countries.

In a speech to the full membership of the Bank Group and Fund, Kim acknowledged the challenging conditions.

"While we remain confident of ending extreme poverty, the final stretch will be extremely difficult because we are in the midst of a period of slow global growth, the end of the commodity super-cycle, pending interest rate hikes, and continued flight of capital out of emerging markets," said Kim.

"To spur growth, every dollar of public spending should be scrutinized for impact. Every effort must be made to improve productivity," he said. "And in a period when banks are de-risking, we have to ensure that capital is accessible — especially for small business owners and entrepreneurs who will create jobs."

The Annual Meetings — the first to be held in Latin America since 1967 — dealt with a wide variety of global issues, as well as some focused on the host region. A series of livestreamed events discussed inequality, the economic slowdown, renewable energy, climate change, and the Bank’s twin goals of ending extreme poverty by 2030 and boosting shared prosperity. The events featured government ministers, development experts, CEOs, and celebrities. The Bank also released economic updates during the week for Latin America and the Caribbean, East Asia and Pacific, Africa, and South Asia.

One pressing global issue that drew particular attention was the global crisis surrounding refugees and migrants. The Development Committee, in the communiqué, said the crisis requires "targeted support" for "countries and regions in turmoil, especially in the Middle East and North Africa, but also in other fragile and conflict states."

Kim, earlier in the week, agreed: "For all involved, the refugee crisis is an immensely difficult challenge," he said. "The World Bank Group has been assisting the host communities of the refugees in Lebanon and Jordan for the past few years, and now we’re exploring new ways to increase our help for Syria’s neighbors."

On Oct. 10, the United Nations, the World Bank Group, and the Islamic Development Bank Group announced a joint initiative to scale up financing in the Middle East and North Africa to help countries hosting significant refugee populations, countries impacted by conflict, as well as countries that have significant investment needs to achieve economic recovery.

"Climate change and natural disasters put hard-earned development gains at risk, particularly for the poor and vulnerable," said the Development Committee. It asked the Bank Group to help countries assess climate risk, build resilience and "scale up its technical and financial support and mobilize resources."

Finance ministers of the "Vulnerable Twenty" (V20) countries most at risk from climate change, representing close to 700 million people, said this week that an average of more than 50,000 deaths a year were attributable to climate change, with the number expected to rise exponentially by 2030.

On Oct. 9, following the Climate Ministerial meeting hosted by Peru and France, the Bank Group pledged to boost climate-related financing by as much as a third, to as high as $29 billion annually, with the support of the Bank Group’s member countries.

"The World Bank Group stands ready to scale up its support to meet increasing demand from countries," Kim said in a press conference Oct. 8.

For their part, countries must "show real ambition" at the climate change conference in Paris in December, he said.

"Political will for urgent action is critical. We believe there are politically credible pathways to deliver $100 billion a year in climate financing for developing countries by 2020," he said.

The Development Committee also addressed a number of other important issues: 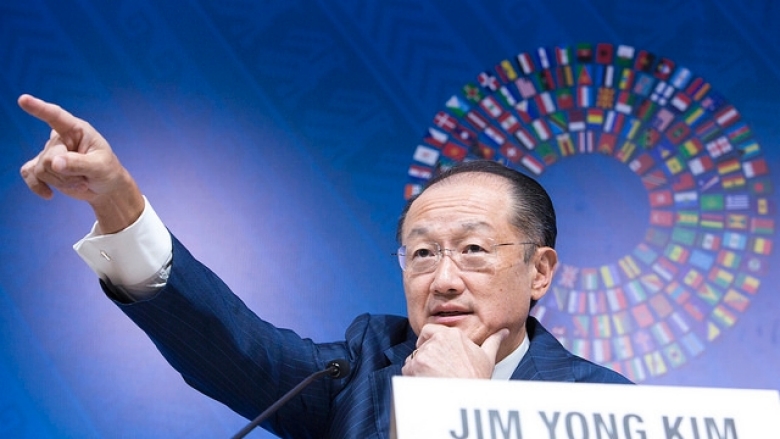