Tanzania has immense solar and wind power potential that could provide much-needed energy for the developing nation, according to preliminary findings from a World Bank renewable energy resource mapping project.

The country’s resources suitable for solar power generation are estimated to be equivalent to those of Spain, and areas of high wind power potential cover more than 10 percent of the country, an area the size of Malawi, and a greater potential than the US State of California, according to the findings.

“Tanzania has big plans for generating electricity from renewable energy resources, so there is a need for clear information on potential geographic concentration, as well as seasonal and daily availability of these resources,” said Felchesmi Mramba, Managing Director of the Tanzania Electric Supply Company (TANESCO), the country’s national electricity utility, speaking at a media briefing on the findings held in Dar es Salaam on May 22, 2015.

The initial results were based on global datasets and satellite analysis, and involved six months of intensive number crunching by specialist wind and solar teams supported by the World Bank’s Energy Sector Management Assistance Program (ESMAP).  Over the next two years, these findings will be validated by placing ground-based solar and wind measuring stations in 30 locations around the country.

This work will support and inform a long-term partnership between the World Bank and TANESCO to expand and modernize the country’s power sector.

“These maps will be good guidance for investors who are interested in investing in renewable power projects, thereby speeding up the expansion of sustainable power generation,” said TANESCO Managing Director Mramba.

One of the most interesting initial findings was that certain areas of Tanzania with high solar irradiation also have high wind speeds at night, raising the possibility of round-the-clock power generation. 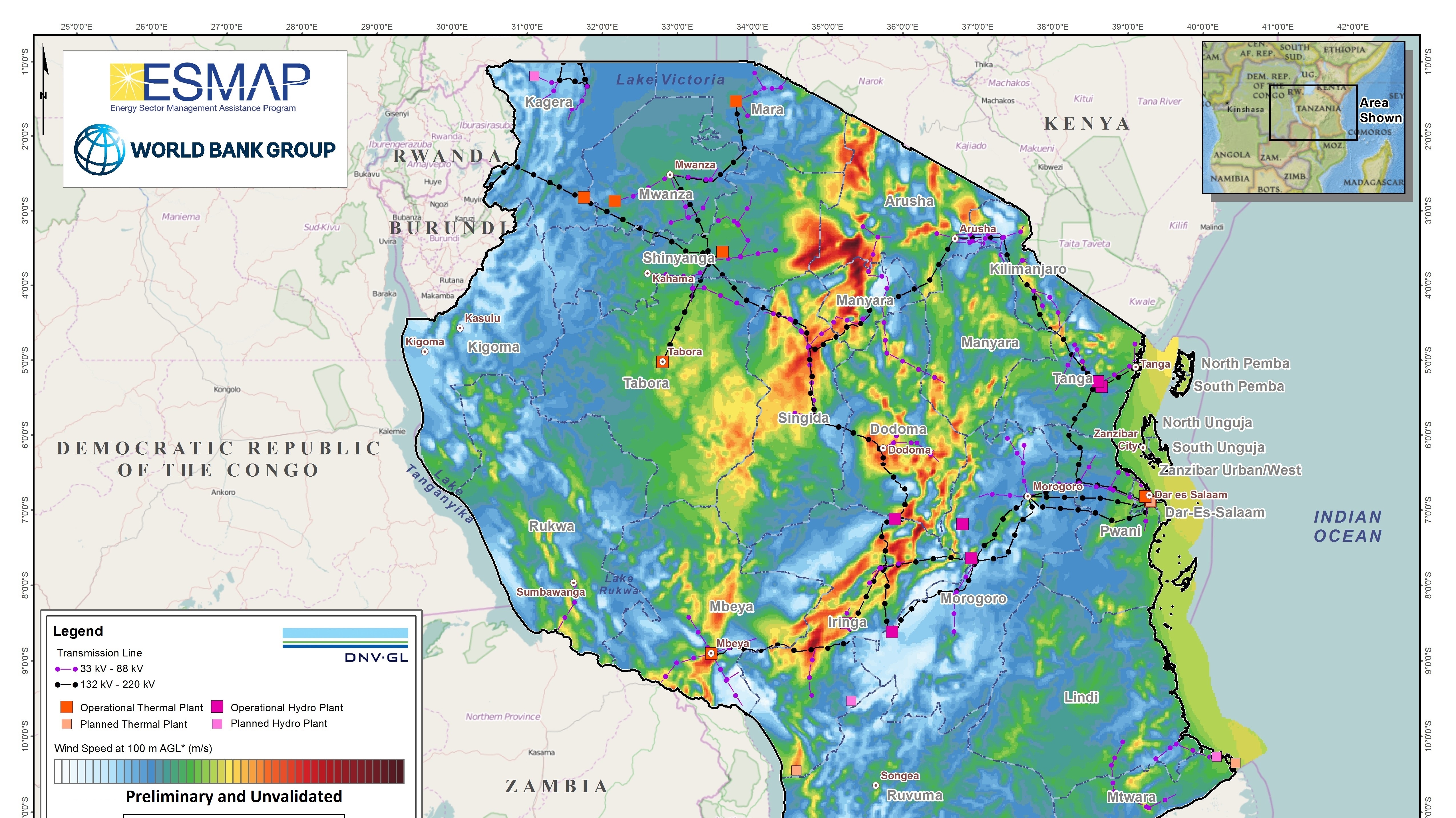 More than 10 percent of Tanzania has high wind power potential, according to preliminary results of a mapping exercise.

All data from the initial results and from the next two years of ground-based measurements will be made available on a World Bank website and on the Global Atlas of Renewable Energy published by IRENA, the International Renewable Energy Agency.

Tanzania’s energy mapping is part of a global, $22.5 million initiative by ESMAP to help 12 countries analyze their renewable energy resources to guide policymakers and investors.The $2.8 million program in Tanzania is one of the largest under this initiative, and includes mapping of the country’s small hydro potential.

The costs of power generation from solar and wind have fallen dramatically in recent years, making them competitive with traditional forms of energy in some markets.

“While Tanzania is unlikely to see the low prices we have seen in other markets until it scales up wind and solar, these renewable resources nicely complement the country’s main existing sources of energy supply, hydropower and gas,” said Anders Pedersen, team leader of the renewable mapping program in Tanzania.

“When it comes to renewable energy, a number of countries are realizing just how great their potential is at the same time that prices are coming down,” said Oliver Knight, team leader for the global ESMAP renewable mapping initiative.  “This is opening up interesting new options for long-term power sector planning.”

The May 22 media briefing on the initial findings for Tanzania was followed by the inauguration of the country’s first solar and wind mapping station, on the rooftop of the Physics Department at the University of Dar es Salaam.