Recovery from disasters like Typhoon Haiyan in the Philippines creates opportunities to build back better with resilience.

The torrential rain that caused flooding and landslides across Bosnia and Herzegovina last May displaced 90,000 people, affected more than 1 million and cost the economy about 15 percent of gross domestic product (GDP) in lost output and damage. In Northern India and Pakistan, flooding in September brought nearly $18 billion in losses and marked the fifth consecutive year Pakistan suffered a billion-dollar flood.

Natural disasters of this magnitude and worse occur almost every year around the world, disproportionately hitting developing countries with an economic force that can roll back their development gains and exacerbate inequality. Without efforts to build resilience, such disasters can make development investments unsustainable.

“Resilience and development are inextricably linked. When we invest in infrastructure, we have to invest not just for today but for the future, and that means building resilience into everything we do,” said Rachel Kyte, World Bank Group vice president and special envoy for climate change.

Scaling up resilience in developing countries

In all, GFDRR issued 85 new grants in fiscal year 2014 worth a total of $60 million—a 31 percent increase over the previous year. The full portfolio of projects being implemented, described in the GFDRR Annual Report 2014: Bringing Resilience to Scale, consisted of 232 grants worth approximately $168 million. Sub-Saharan Africa is the largest regional recipient.

Much of the facility’s work during the past fiscal year focused on community-driven and technology-enabled solutions to reduce disaster risk. For example:

GFDRR also leveraged its relationship with over 400 partners through a number of high-profile events like the Understanding Risk Forum, which brought together over 800 participants in June 2014 to collaborate on innovative solutions to creating and communicating risk information, and the Resilience Dialogue Series, which brought together leaders from organizations like USAID, the European Union, the United Nations, the government of Japan and others to refine and reinforce the resilience agenda.

Moving forward, GFDRR is strategically applying its knowledge, experience, and convening power to help ensure that the Sustainable Development Goals and the successor to the Hyogo Framework for Action on disaster resilience—both set to commence in 2015—are aligned and include disaster risk management targets.

“The year ahead offers a unique opportunity to take this momentum to the next level – starting in Sendai, and later in Addis Ababa and Paris,” Kyte said. “Through these defining development and climate negotiations, we can ensure that resilience is fully integrated in the post-2015 development framework.”

By sustaining and expanding global commitments to bring disaster resilience to scale, the development community has the potential to make real, sustainable change in the lives and futures of the world’s poorest and most vulnerable. 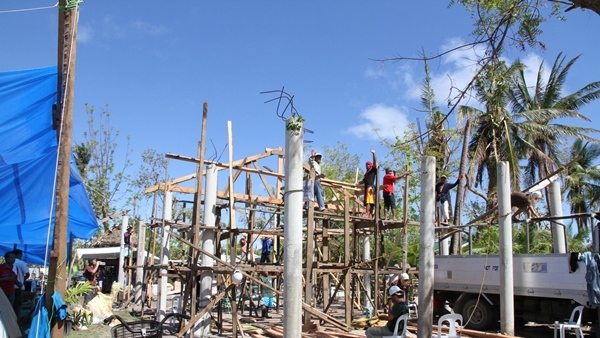