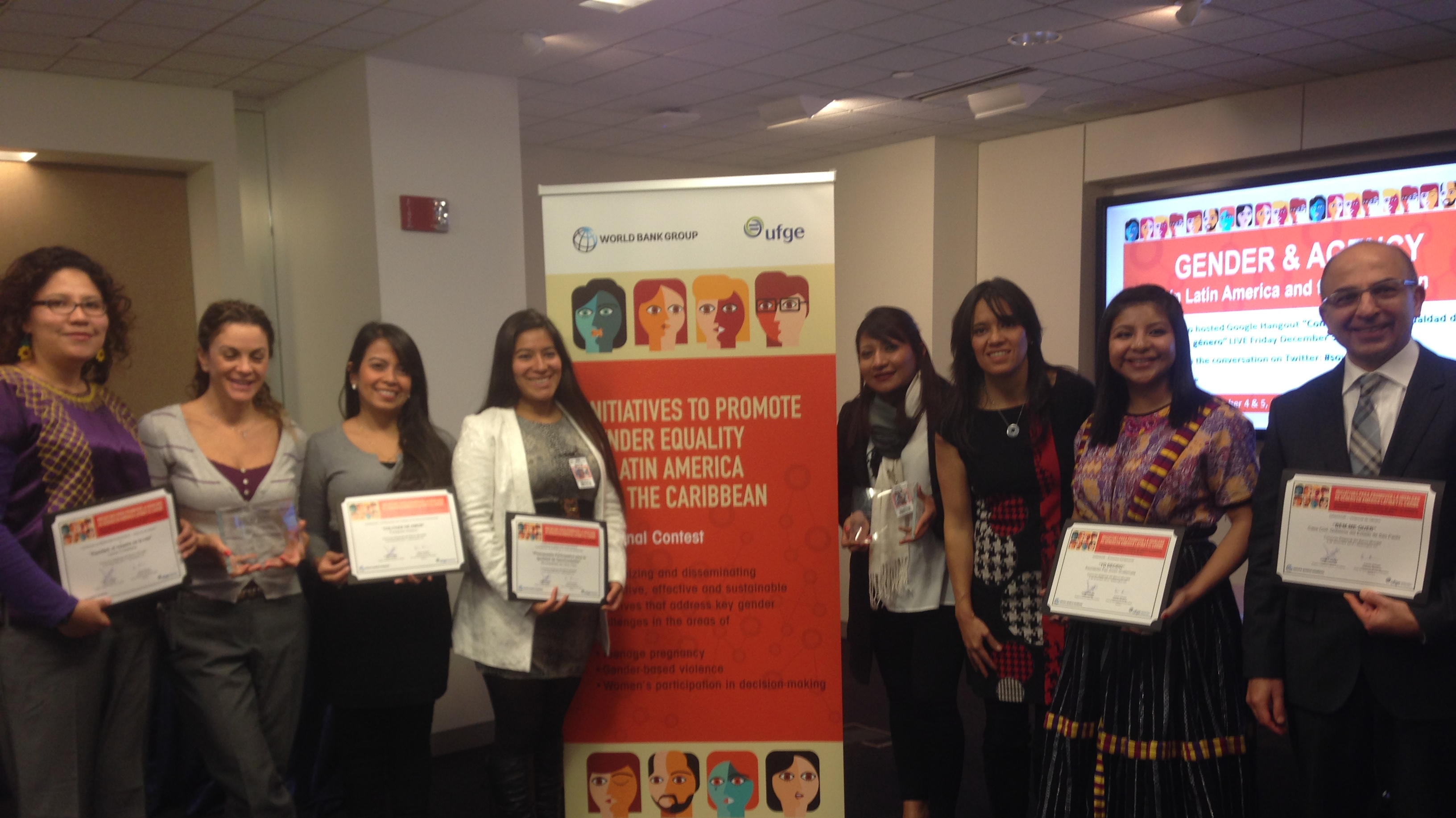 The contest drew more than 150 entries from across the region.

WASHINGTON, December 18, 2014—Experts, activists, and development professionals gathered here this month to honor winners and honorable mentions in the World Bank Group’s "Initiatives to Promote Gender Equality in Latin America and the Caribbean" contest, which drew more than 150 entries from across the region.

The contest, supported in part by the Umbrella Facility for Gender Equality (UFGE), invited regional submissions highlighting innovative and effective approaches, processes, policies, or programs that have led to improved outcomes in the areas of teen pregnancy, gender-based violence, and the women’s participation in decision-making.

While Latin America and the Caribbean region has seen significant advances in women’s access to health care, education, and economic opportunities, challenges persist in the realm of individual agency and voice.

A series of events including an awards ceremony, a knowledge fair and roundtable discussions here in Washington December 4-5 brought together more than 100 experts from the region. The winners were:

The "I Decide" initiative was launched in March 2013 and to address teen pregnancy, sexually transmitted infections (STIs), and HIV, using peer education and innovative technologies to share information and raise these issues as a government priority. "I Decide" has notably signed work agreements with more than 10 municipalities, developed a volunteer corps to strengthen differentiated care in youth-friendly spaces, and created a network of 250 young volunteers. It has already benefited 11,000 people directly and some 5,000 indirectly.

"Bem-me-Quer" began providing psycho-social, medical and legal services to victims of sexual violence, mainly women and children, in 2001, aiming to cover a gap in public services that didn’t offer effective or coordinated care to victims. By August 2014, it had carried out more than 29,900 consultations with children, teens, and adult women. With early medical attention, the program has helped gather key evidence for the legal system and reduce the incidence of unwanted pregnancy and sexually transmitted diseases. The number of consultations, further, nearly doubled from around 3,250 in 2001 to more than 6,000 in 2013. This initiative has notably involved multiple government departments and multi-sectoral teams offering complementary legal, medical, and support services.

The "Love Quilts" initiative, launched in 2009, aims to provide safe spaces and strengthen the participation of women in the municipality of Malambo, Colombia. The women, many of whom have little education and low awareness of their rights, gather in groups of about 20 to sew so-called "love quilts" and discuss issues such as their rights as citizens, the importance of participating in family and community decisions, and how to address challenges in their lives. Some 40 percent of participants have become community leaders, collectively tackling problems such as violence, inequality, and illiteracy.

The discussion around what works to promote gender equality in LAC can be followed at the hashtag #SoyIgualSoyMujer, and BBC Mundo hosted a Google Hangout in which the winners discussed their initiatives.

Read the full list of winners, honorable mentions, and finalists