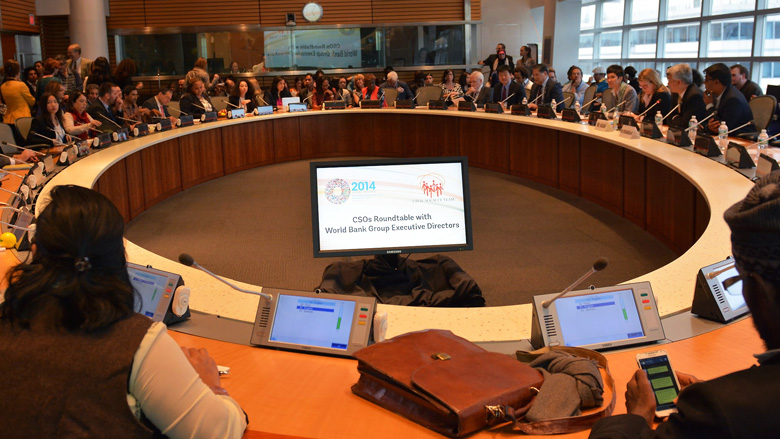 The Annual Meetings Civil Society Roundtable with Executive Directors was held on Tuesday, October 7th, 2014. The purpose of the hour and a half plenary discussion, which has taken place at each Annual and Spring Meetings since 2011, is to foster policy dialogue and discussion between the World Bank Group Executive Directors (EDs) and Civil Society Organizations (CSOs) representatives. The Roundtable, which was attended by some 150 CSO representatives, enabled CSO representatives to convey their perspectives and ideas directly to members of the Bank’s governing body.

This year, a record nineteen Executive Director’s Offices (out of a total of 25) were represented at the Civil Society Roundtable. The Roundtable was co-chaired by Merza Hasan, who acts as ED for Kuwait and other Middle East Countries and also as Dean of the Board, alongside Dhananjayan (Danny) Sriskandarajah, Secretary General and CEO of CIVICUS, the World Alliance for Citizen Participation. Among the topics covered during the meeting were: the World Bank Group’s safeguards review; human rights; SOGI (sexual orientation and gender identity) issues; citizen engagement; corruption; gender; the BRICS Bank; and youth.

In his opening remarks, Mr. Hasan noted that the relationship between the World Bank Group and civil society has evolved considerably over the past few years. A telling sign of this, he said, is the ever-growing participation of civil society actors in the Annual and Spring Meetings, which have become an important forum for civil society representatives to engage in dialogue with Bank leadership, surface issues, and provide feedback on Bank projects and policies. Mr. Hasan noted that the very mechanisms by which the World Bank engages with civil society are evolving, with the introduction, for example, of individual ED office websites and country engagement links. These developments, he said, were in direct response to concerns surfaced about the EDs’ responsiveness to CSO feedback at the 2013 Spring Meetings ED Roundtable, illustrating the real impact and importance of this bi-annual event.

Mr. Sriskandarajah echoed this sentiment, adding that meetings like this one weren’t always a regular feature of the Annual and Spring Meetings agenda. He commended the Bank for its better-than-average engagement with CSOs, affirmed earlier this year by a report his organization published on how well ten International Organizations (including the World Bank) engage civil society.  The Bank received high marks in comparison with many of its peers. CIVICUS has been one of the organizations driving engagement efforts between the Bank’s EDs and CSOs from the civil society side.  As part of this agenda, CIVICUS created a scorecard to measure the openness and transparency of each ED’s office’s website. Mr. Sriskandarajah took the opportunity of the Roundtable to award top honors to Germany and Francophone Africa’s EDs offices, which capped the first iteration of the scorecard. Following the impromptu awards ceremony, Mr. Sriskandarajah concluded his remarks by introducing the first topic of discussion, the World Bank Group’s safeguards review. Mr. Hasan then opened the floor to questions.

Several CSO participants stated their disappointment with the draft safeguards statement that surfaced recently, expressing concerns about several key elements of the document. Many lamented perceived dilutions to the previous safeguards policy that the draft introduced. Some felt that the consultations process was restricted to capital cities and “5-star hotels,” therefore excluding those who would be truly affected by safeguards policies.  Others were concerned that changes made to the policies would have reverberations throughout the international development community, potentially setting the wrong example for other multilateral development Banks.  One participant expressed skepticism about the new policies’ adherence to and consistency with the UN human rights framework. 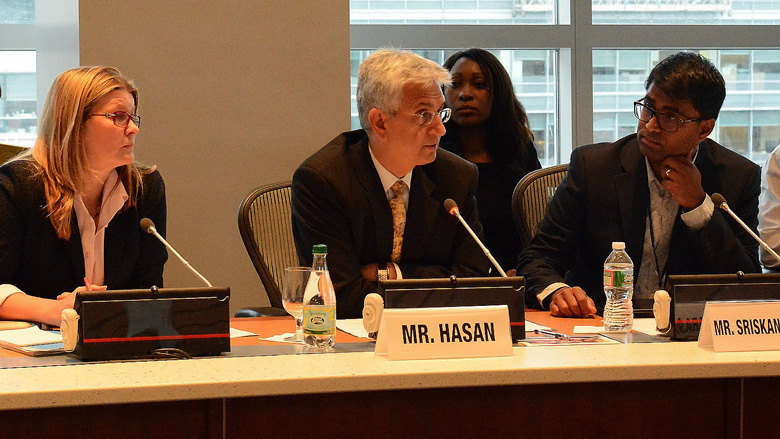 In response to these concerns, several EDs stressed that the safeguards review was still very much in the consultation phase, and that the document that was surfaced in July is a first draft that will go through more iterations based on additional feedback, including from those around the table. In terms of the latest draft, they said that there was no attempt to dilute the safeguards, but rather to move towards improving the capacity of governments to strengthen their own safeguard policies and systems. As it was intended, the new model would lend governments more ownership to design and develop their own frameworks based on country contexts, but would also enable the Bank to hold them accountable if they tried to deflect responsibility when the World Bank’s own policy didn’t specifically cite certain measures. Ultimately, one ED concluded, the goal is to make sure that the new safeguards framework will be implementable in practice, and that safeguards will have a real impact on the ground where they are most needed.  In this way, civil society organizations, he said, would play a critical role in guiding their design in that direction.

The discussion then moved on to other topics as the EDs took more rounds of questions. Several questions focused on corruption, with participants probing the Bank’s debarment processes, the level of trust the Bank puts in high-level officials that have been offenders in the past, and the relationship between the UN initiative on corruption and the World Bank’s own anti-corruption efforts. In response, EDs acknowledged the difficulty of working with corrupt companies and governments, but also the sheer impossibility that the Bank could avoid doing so. They articulated the Bank’s role in continuing to work with these entities, engaging strongly with those that are committed to transparency and working towards international best practice, and encouraging those that aren’t there yet to do better. One ED pointed out that, in the past, corruption was seen as too political to be addressed by the Bank at all. Today, measures and regulations for preventing corruption are a core part of Bank processes and are embedded into its programmatic work.

Questions also touched upon several interest groups represented by participants in the room and online. In particular, questions arose about the Bank’s stance on SOGI issues.  Participants cited strides and promises made by President Kim at the Spring Meetings six months ago, and were eager to see these promises translated into greater inclusiveness in Bank policies and projects. Other participants raised concerns about whether the Bank was taking adequate action to engage with youth. A suggestion was also made that the Bank undertake more practical projects that aim to lift women out of poverty. In addressing the latter remark, one ED remarked to participants that gender equity is ‘smart economics’ as it allows  economies to develop more fully. He spoke about the Bank’s new gender director, and the efforts of the gender practice to help project leaders across the Bank mainstream gender into their operations.

Mr. Hasan closed the session by reiterating the commitment of the World Bank’s Executive Directors to continue dialogue of this kind. Mr. Sriskandarajah echoed his previous supportive comments that very few governing bodies interact this way with civil society. Mr. Hasan also stressed that it is never the intention of the World Bank Group to cause harm to individuals or to countries, and that its staff is committed to learning from other stakeholders in the development community – and modifying accordingly— in order to ensure that this holds true in practice.