What is holding developing country cities back from accessing the financing they need for sustainable urban development?

At the first City Creditworthiness Academy workshop organized by the World Bank and partners in Nairobi last October, 18 cities in Africa conducted a self-assessment of their finances, shedding light on a common concern – the need to develop local capital markets.

“My city is on the brink of exploding in terms of population, which comes with the challenge of providing infrastructure and facilities. We will need extra finance,” said Ebenezer A. Kwaitoo, municipal solicitor from Sekondi-Takoradi Metropolitan Assembly, Ghana. “We didn’t have the facilities to rate ourselves so far as credit is concerned, but this workshop has opened our eyes to what we need to do, to be able to attract investment to support our projects.”

In the assessment, the infancy of capital markets and the inadequate creditworthiness of municipalities emerged as clear priorities for action: 12 cities claimed no access to long-term financing from debt markets, and only two cities had a credit rating at a local or international scale.

Without local capital markets, most municipalities in developing countries would have no option to finance debt. That is because tapping international markets requires borrowers to meet even higher creditworthiness standards, and higher transaction costs for both investors and borrowers imply volumes of financing that are likely to exceed the debt capacity of municipalities. Most importantly, only local currency debt financing is appropriate for municipal-level infrastructure that does not generate hard currency revenues.

Most emerging markets have a well-established banking sector, but local commercial banks usually find it difficult to provide loans that match the long-term nature of infrastructure projects. Also, capital investments often require funding that exceeds the amount that a commercial bank can lend to a single customer under banking regulations. Supporting the development of mature local capital markets can help address these constraints.

" There is a misconception that creditworthiness implies massive amounts of investments from international markets, but you can build on smaller achievements like this. "

In contrast, interventions in policies, laws, and regulations at the national government level were not regarded as urgent among the group of city officials. Officials from 14 cities stated that oversight from the central government was effective. Fourteen reported clear regulations on sourcing debt from the market, and 13 said they have the legal authority to do so.

Encouragingly, revenue was generally considered stable, with 10 cities reporting a positive trend in their own revenue sources.

“This shows potential, because reliable revenue flows are one of the key drivers of creditworthiness,” said Joshua Gallo, a municipal finance specialist at the Public-Private Infrastructure Advisory Facility (PPIAF), which manages the academy in collaboration with the World Bank’s urban practice. “There is a misconception that creditworthiness implies massive amounts of investments from international markets, but you can build on smaller achievements like this.” 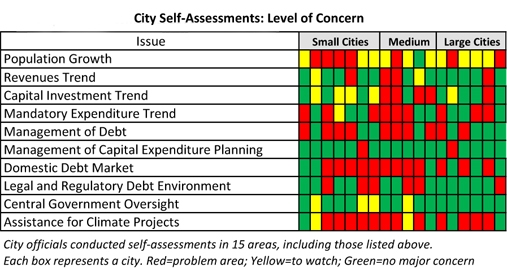 The self-assessment, derived from the World Bank Institute’s Municipal Finance Self-Assessment, is an important first step to help cities prioritize actions to improve financial management and move towards becoming creditworthy. The city officials examined their operating environment and characteristics of financial management, as well as external factors affecting access to financing.

“The creditworthiness academy and follow-up support aims to help cities improve their performance as soon as possible, so they can start generating more revenues, leveraging their assets, attracting private investment, and overall strengthening their fundamentals even before reaching creditworthiness,” said Sameh Naguib Wahba, acting director for Urban and Disaster Risk Management at the World Bank. “This, in turn, will help cities to deliver better services for their citizens and make long-term investments in climate resilient, low-carbon infrastructure which is critical to managing rapid urbanization.”

Based on assessment results, each city developed an agenda for action. As part of this initiative, a follow up program of technical assistance is being designed for implementation in several cities, working with mayors, departments within municipal governments and counterparts, and enlisting the support of partners. The Bank brings in expertise and works to ensure that all activities are coordinated with the national government, supporting regulatory or legislative reforms if needed. The Bank also engages the private sector, helping to identify opportunities and schemes for potential capital investment.

For example, the Bank Group and PPIAF have agreements to work with three municipalities over the next two years to support institutional strengthening with the goals of obtaining a shadow credit rating, building capacity to demonstrate debt management performance, and improving understanding of infrastructure financing options.

Other concerns highlighted by the self-assessment included a lack of access to technical assistance for the planning of climate-related infrastructure projects and structuring long-term finance options. The Creditworthiness Academy, part of the World Bank Group's Low-Carbon, Livable Cities Initiative, addresses this issue as well, with expanded training for climate-smart capital investment planning. The next workshop, to be held in Seoul April 21-25, presents an opportunity for Asian cities to also learn from green growth efforts in Korea for climate-smart development.

An online community of practice has also been launched in parallel to the Creditworthiness Academies to help city officials find solutions on municipal finance.