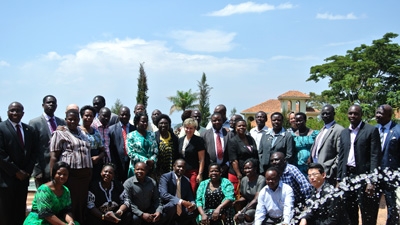 Forty-four Members of Parliament who were recently trained in disaster preparedness and management.

KAMPALA, October 30, 2013 – Ugandans must adopt a mindset of preserving the country’s natural resources to move from poverty to prosperity, beginning with potential leaders who must show evidence of having planted trees.

This was one of the key resolutions at the end of a recent one-day workshop sponsored by the World Bank Group in partnership with the country’s Parliament for Disaster Risk Reduction. The workshop provided 44 Members of Parliament with knowledge and experience in disaster preparedness and management.

“The most frequent disasters in Uganda are droughts, floods, and landslides,” he said. “These hazards impact human lives by causing death, destruction of infrastructure, property, livelihoods, and setting back socio-economic development.”

Magda Lovei, the World Bank sector manager for environment, natural resources, water and disaster risk management, recognized and commended Uganda for having been the first country in East and Central Africa to approve the National Disaster Preparedness and Management Policy. The policy integrates disaster risk management with development planning through a multi-sectoral approach.

“You have also recently approved the Climate Change Policy,” Lovei said, noting that now is the time to move from policies to implementation. “This policy calls for a better understanding of the impacts of climate change in Uganda, and for an appropriate program for adaptation, including the management of disaster risks.”

Ephraim Kamuntu, minister for water and environment, recognized the strong legal regulatory framework in Uganda, and said now is the time to strengthen implementation, by building on international experience and priorities for moving forward.

“Government needs to amend the Environment Act to implement the environment fund, take quick actions to mitigate environmental degradation including an immediate ban on the use of polythene bags, and introducing mandatory solar and water harvesting on all buildings,” he said.

Hon. Cecilia Ogwal expressed her thanks on behalf of Parliament and said that the constitution needs to be amended to declare all natural resources, such as wetlands and forests, public reserves.

“Government of Uganda must begin to demonstrate willingness and goodwill for preserving natural resources by developing legislation to prohibit the sale of forests and wetlands to investors,” she said.