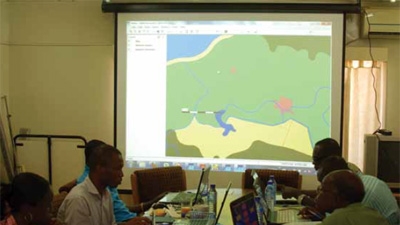 ACCRA, October 21, 2013 – A new flood forecasting and early warning system can alert the government three days ahead of an expected disaster, helping to prevent the loss of life in communities around Northern Ghana’s White Volta River Basin.

Led by the World Bank's Africa Disaster Risk Management/Water Resources Group, with technical and financial support from the Global Facility for Disaster Reduction and Recovery, the recently completed, state-of-the-art system was created in response to the government’s push for better management of flood-related crises following devastating flooding in the Basin, most notably the October 2010 floods.

“As a country, we look forward to benefiting from the developed flood early warning system by reducing physical and economic losses,” said Hon. Alhaji Collins Dauda, Minister of Water Resources, Works and Housing, at the recent opening ceremony for the system. “It is imperative to drastically reduce damage to homes, schools, health facilities and the livelihoods of the vulnerable in the area.”

The government conducted an in-depth White Volta Flood Hazard Assessment of the recurring floods in the Basin to build a thorough understanding of the hydrology of the region. The result was a dynamic model of the river system based on extensive river gauge and meteorological data, along with historical data to identify flood-prone areas. The assessment, financed by the Bank’s Global Facility for Disaster Reduction and Recovery, covered the genesis of the flooding of the White Volta, the mapping of flood hazards, the effectiveness of structural and non-structural measures to reduce flood impacts and most importantly, the development of a fully operational forecasting system with a three-day lead time. By combining meteorological and river modeling data, the system alerts authorities through a sharing network that includes computer messaging and SMS. Rapid decisions can then be made, including whether a town or village should be evacuated should flooding be imminent.

Spanning 29 districts in the North of the country, the White Volta River Basin and its water resources act as a major economic contributor. During the last decade however, water-related hazards, such as floods, have become more frequent due to the effects of climate change, environmental degradation and population growth. Key sectors such as agriculture, energy, transport and health are all affected by these climate risks.

“As such, better understanding and management of climate risks is thus crucial to Ghana’s socio-economic growth,” said Yusupha Crookes, World Bank Ghana Country Director. “This is even more important because as the economy grows, more pressure will be put on the natural resources potentially exacerbating the flooding problems.”

Several organizations collaborated to assess the impact of climate risks, starting with a steering committee led by the Water Resources Commission and including;

The steering committee coordinated the creation of the system and ensured all major stakeholders had a hand in the advanced planning and flood management for the entire White Volta River Basin.

“More importantly, this model may also inspire initiatives to advance the management of floods in other parts of the country with similar challenges and eventually the entire Volta River Basin” said Ben Y. Ampomah, acting executive secretary of the Water Resources Commission.

The White Volta River Basin authorities will continue to make use of the system for planning purposes and ensure communities effectively receive advanced flood information. Additionally, all involved national agencies will continue to sustain their newly acquired technical expertise in flood forecasting with further technical and financial support from the Global Facility for Disaster Reduction and Recovery.

“This technical system has far reaching effects by not only warning residents in the event of imminent flooding, but helping to preserve livelihoods and improve resilience through long-term planning,” said Christoph Pusch, practice leader for the Africa Disaster Risk Management Group. “We aim to scale up similar efforts in other African countries.”