The Role of Livestock Data in Rural Africa: The Tanzanian Case Study 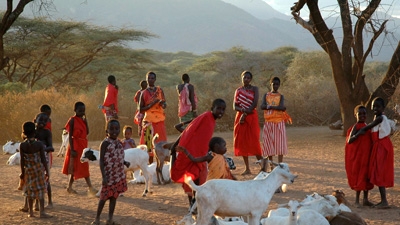 DAR ES SALAM, Oct. 3, 2013—Many farmers across rural Africa depend on their livestock for survival. Whether animals such as chickens, goats, pigs and cattle are used as a primary source of household food or as income from the sale of animal by-products, they represent an important asset to many families throughout the continent.

This reality, coupled with the fact that demand for animal protein continues to increase in Sub-Saharan Africa due to population growth and a rising middle class, defies the trend of a sector that is often neglected when it comes to targeted investments. Yet the data shows us that this may indeed represent a missed opportunity.

In a study released by the Livestock Data Innovation in Africa project, an initiative co-implemented by the World Bank and funded by the Bill and Melinda Gates Foundation, there is ample evidence that taking a close look at the livestock sector in a country like Tanzania, for instance, can reveal many interesting facts about investment gaps, potential benefits, and overall social impact.

Some of the most revealing findings of the Livestock and Livelihoods in Rural Tanzania study, which is a based on the most recent national survey, are about the contribution of the livestock sector to the economic growth of the country, productivity of the sector itself and gender differences in terms of livestock ownership and access to input and markets.

From an economic standpoint, the data collected indicates that smallholder farmers dominate the Tanzanian agricultural sector and are involved in some form of subsistence agriculture. Furthermore, most rural households report some income generated from livestock activities, earning up to an average of 22% of total household income. Poor households tend to own smaller livestock, specifically chickens and goats, while wealthier ones tend to own larger animals, especially cattle.

Inputs such as animal fodder and hired labor tend to be scarce among smallholder farmers in Tanzania, while livestock diseases are widespread. Both of these factors hamper productivity of the sector and thus represent a missed opportunity. Data reveals that less than one-third of all family-owned livestock is vaccinated and approximately 60% of all the animals suffer from some type of preventable disease. On the positive side, 25% of the households that own livestock use organic fertilizer for crop production, a practice that if taken to scale can potentially increase overall agricultural production.

Finally, and unsurprisingly so, there are important gender differences among livestock owners. Tanzanian women who own livestock and are heads of household provide better nutrition for their entire family. Although women are less likely to use inputs such as fodder, labor and vaccines due to economic constraints, they are more commercially oriented than their male counterparts. The study reveals that among women who own livestock, 37% of their total production is sold on the market compared to 30% of the male livestock production.

The Ministry of Livestock and Fisheries in Tanzania is committed to enhance livestock data to facilitate informed decision-making. “Good reliable statistics provide us with the eyes and ears to respond to the development needs of the Tanzania population,” says Longin Nsiima, Livestock Production Expert with the Ministry. “The livestock sector is ideally placed to generate economic growth through data-driven investment opportunities.”

The Tanzania study confirms that investing in smallholder farmers who own livestock in rural Africa is a catalyst for economic growth. Strong data provides the roadmap for boosting targeted investment, while capital, inputs and markets drive growth.