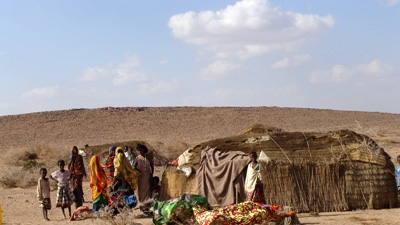 ADDIS ABABA, October 1, 2013 -- Typical of many pastoral areas, the Somali Regional State (SRS) in Ethiopia is one of the largest and sparsely populated regional states in the country. For its five million inhabitants, pastoralism is not a mere economic activity; it is way of life. With 85% of the population engaged in pastoralism and agro-pastoralism, the nature of development challenges which face the region are also quite unique. Provision of basic services like health and schools remain generally weak, and attempts to change things often failed.

The 15-year, three-phase project began in 2003, and is currently in its second five-year phase. Some 55 districts, 21 of which are in SRS, have been selected to benefit from the investment. During Phase I (2003-2008), 1800 development projects in 32 districts were finished and the pastoral community has begun to reap the benefits. In partnership with International Fund for Agriculture Development (IFAD), the project is planning to reach all pastoral districts in the country in its third and final phase, scheduled to begin in January 2014.

Ahmed Mohammad Farrah, 40, is a proud father of seven and celebrity-agro-pastoralist of the PCDP community of Barrak. Farrah seems to be a source of pride for the 300-household Barrak, as his is a primary example for the success of the community-based pastoral intervention. With his elder son, going to high school in the district capital, Farrah is planning to spend 70,000 birr on a brand-new, second house, and perhaps move his family out of the rural Barrak community to the capital.

“Recently, I have purchased a piece of land in Shenile,” Farrah said. “I am prepared to build my second home there.”

According to villagers, Barrak offers a vast agricultural land suitable for sorghum, maize and vegetable cultivation. Given scanty rain fall conditions, water is the most precious commodity for both Barrak and the entire region. The Barrak River, the only source of water near the kebele, was not that useful either.

“The water from the river seldom reaches our farm,” a villager commented. “Most of the time, it just oozes away into the sand.”

Projects accommodated by the PCDP, most importantly those small scale irrigation schemes in the SRS, appears to be life-changing for the agro-pastoralists, and Farrah stands tall in this group.

“Now, irrigation water comes straight to my farm via concrete canals and I can plant all year long,” he said. According to Farrah, production has doubled after the irrigation project, not to mention gains in productivity. The story seems to be the same across the agro-pastoralist community in Barrak.

“Now, traders come for our produce,” a villager said. “Most of them come from as far as Dire Dawa looking for fresh supplies.”

As one of the few individuals involved with the PCDP from its very inception, Assaye Legesse, a senior agricultural economist at the Bank and task team leader of the project, remembers how before PCDP repeated development intervention in pastoral areas kept running into a dead-end. Legesse said just after the drought of 2001-2002, the Ethiopian government invited the Bank to help crack the development puzzle in pastoral areas. It was then that the need for a fresh approach for pastoral development intervention emerged.

The new approach includes a community initiated and led intervention where community participation starts from the planning stages. Through discussion, communities would be encouraged to identifying development gaps, and later prioritize and narrow down to three most pressing gaps for immediate intervention. In case of Barrak, small scale irrigation scheme was ranked both the first and the third most pressing. Each selected project is allotted a sum of 50,000 dollars, and every Kebele under PCDP is entitled to have three projects completed before graduating. According to Assaye, Barrak's success is a living example of the bottom-up approach to development intervention.

However, participation of communities does not end at the planning and designing stages of the projects. Incorporated into various committees, the community would continue to take part in the implementation process.

Participation all the way from the design to the implementation stages is believed to install sense of ownership of projects on communities.

“The Bank has to keep its involvement very limited,” Assaye said. “Apart from financial contribution and technical support, the projects are fully owned and administered by the community.”

“After receiving the necessary training, selected PCDP intervention kebeles would have to mobilize the 5% cash contribution for the selected three projects,” Seid said, giving project ownership to the communities.

Once a kebele has successfully completed all three projects, it is ready to “graduate” from the program. Barrak is one such kebele which will graduate at the end of PCDP II, and its success has influenced other kebeles such as Gillisso. The Gillisso community has taken ownership and formed committees to mobilize the expected cash contribution before being approached by project support teams.

Encouraged by the positive outcomes, the World Bank and its co-financier IFAD are set to increase their share of investment in phase three of PCDP. The budget allotment has showed a steady rise over time; phase one, which had US$60 million dollars at its disposal, phase two had a total budget of US$138 million. Phase three is expected to expand its reach to 117 districts with US$230 million dollars.