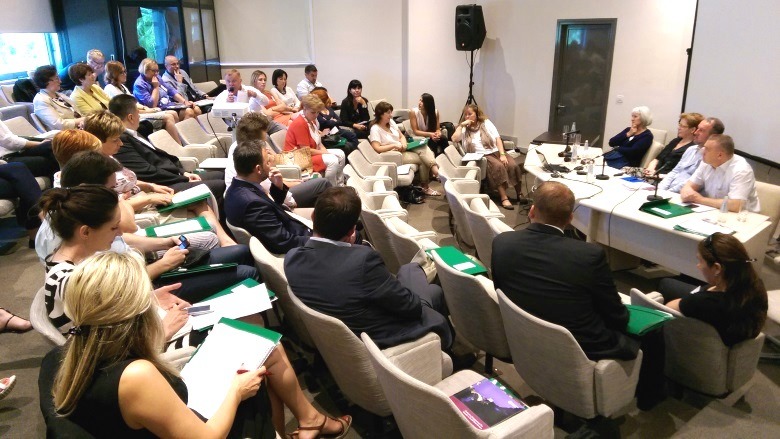 The World Bank in collaboration with the Association of Croatian Cities organized a Country Dialogue on Strenghtening Capacities of Local Governments.  The Dialogue, held on July 9-10, 2015 in Porec, launched the second phase of the World Bank-Austria Urban Partnership Program (UPP II).

The objective of the Country Dialogue was to discuss the current strategic priorities of the respective Ministries of the Government of the Republic of Croatia in the area of local government development and to facilitate dialogue between the two levels of government on how to move the agenda forward on the topics of municipal finances, investments prioritization, asset management, urban governance and integrity building, and social accountability and citizen engagement.  In addition, the meeting provided an opportunity to present the results of the first phase of the Urban Partnership Program and to engage all key stakeholders in the second phase.

The World Bank-Austria Urban Partnership Program (UPP) aims to strengthen the capacity of local governments in SEE region, and to equip local elected officials, city administrators and technical staff with practical tools for decision-making, to effectively manage urban development for inclusive and sustainable growth.  While global in scope, this Program is targeted at the Western Balkan countries, including Croatia.

The workshop was attended by more than 60 representatives from about 20 cities and municipalities, including Mayors and Presidents of the municipalities, members of city and municipal councils, heads of finance, planning and construction, as well as municipal administration.  The meeting was opened by Mr. Vedran Neferovic, Vice President, Association of Cities, Croatia and the World Bank. The meeting was moderated by Dario Runtic, Senior Advisor of the Association of Cities, Croatia and Anto Bajo, WB local expert on municipal finance.

The first day of the Country Dialogue was dedicated to the topics of municipal finance including revenue mobilization, urban planning and land management, capital investment planning, and asset management.

The Municipal Finance session hosted a panel on local government revenue mobilization. Mrs. Nevenka Brkic, Head of financing for local and regional self-government, from the Ministry of Finance pointed out to recent changes in legislation which affected the amount and regional distribution of shared taxes, funding of decentralized functions, and intergovernmental transfers. The presentation provoked a rich discussion among local government representatives, including contributions from Crikvenica, Krizevci and Koprivnica among others.

The local expert stressed that particularly problematic was the collection of tax and non-tax revenues related to the property, such as taxes on holiday houses as well as taxes on inheritance and gifts.

The session further featured presentations from Rijeka and Crikvenica that took part in the Municipal Finance Self-Assessment (MFSA). The representative of Subotica from Serbia shared regional experiences with the Croatian cities. The MFSA helped detect problems at the level of central government, increase LGs borrowing rates from the current 2.5% of operating revenues, increase LGs fiscal autonomy, give more flexibility on the local tax policy (including replacement of conditional with unconditional grants). One of the MFSA outcomes was City of Rijeka Development Strategy.

The session on Urban Planning and Land Management included a panel discussion on Capital Investment Planning at Local Level, with an emphasis on the importance of Public Private Partnerships (PPP). Deputy Mayor of Krizevci presented PPP success story on local level aimed at improving the social infrastructure and economic development by job creation.

Rijeka and Crikvenica took part in the Land Use and Urban Planning Self-Assessment (UPSA) and presented their outcomes, while the experience of Gazi Baba (Skopje) from Macedonia served as regional good example of pilot implementation of the Urban Audit. A number of Croatian cities expressed interest in carrying out an Urban Audit (UA), the first step in identification of a priority investment program.  The Urban Audit helps local governments to assess the greatest needs for investments in infrastructure and service provision, and increase transparency and citizen participation in the process of investments programming.

The last session addressed key aspects of asset management at local level for revenue mobilization, presented by Helena Masaric, City of Opatija. Appropriate management of LG assets is key to economic development of urban and suburban areas. Existing legal framework for municipal asset management in Croatia impairs independent, efficient and economic asset management, which in turn hampers urban development and affects the future of communities.  City of Opatija laid out a number of issues in domestic legislation which limits efficient use of resources (housing, commercial property and land), which in turn affects fiscal stability of municipalities and ability of long term planning. Unsettled property ownership issues are a prime barrier for investments and economic development and for application of municipal projects for EU funding.

The second day of the Country Dialogue was dedicated to the topics of Anti-Corruption and Integrity building and to the demand side of governance – its citizens.

The session on Social Accountability and Citizen Engagement hosted a number of interesting and innovative approaches including the national e-consult system, Rijeka’s budget planning application (online game) for citizens, as well as crowdfunding projects initiated by the Mayor of Pregrada. The international expert further stressed the importance of social accountability mechanisms that enable citizens to become part of the decision-making process.

The second phase of the UPP aims to scale up use of diagnostic tools for local governments and anchor them as part of the municipal practice. At the same time, UPP II aims to expand the citizen engagement and integrity building agenda.

In the next phase, the World Bank through the UPP is expected to play a more prominent role in the support of local governments of Croatia while pursuing continued dialogue with the central government on key reform agenda.