Africa’s decade of economic growth has energized the continent with a sense of optimism about its future.  However, as the World Bank’s recent Global Economics Prospect indicates, growth in the region is forecast to slow to 4.2 percent in 2015, and be only marginally higher in 2016.  This is largely due to the end of the commodity boom and continued slowdown in the global economy.  The priorities for the continent remain to sustain growth and reduce poverty, while facing challenges of climate change, new threats to stability, and the risks posed by communicable diseases.   But opportunities also exist, and increasingly Africa is seen as an investment destination, not solely as a recipient of development assistance.   The World Bank and the Government of Japan collaborate on a wide range of issues in support of African development, including through the TICAD process.  At this seminar, Haleh Bridi, Director for External Relations and Partnerships, Africa Region, World Bank, discussed potentials and challenges of Africa region, and future opportunities for collaboration with Japanese private sector and other partners. 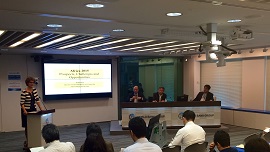 Haleh Bridi is the Director for External Relations and Partnerships at the World Bank’s Africa Region.  She has been at the World Bank since 1991. She joined as a Consultant in the Operations Services Unit of the Africa Region, and has since held various positions, including as Country Director for the Indian Ocean Department (Africa), Director, Regional Programs and Partnerships in the Middle East and North Africa Region, and Director for Advisory Services at IFC. Prior to joining the World Bank, Haleh spent 10 years at the OPEC Fund for International Development (OFID) covering OFID’s operations in Francophone African countries. Haleh is a national of Iran and has lived in many countries in Europe, US and Africa.  She has an MA in International Studies from the American University in Washington DC.

Katsumi Hirano joined IDE-JETRO in 1991.  At IDE-JETRO, he held key positions including Director for Africa Studies Group, Executive Director of JETRO Johannesburg Center, and Director General of Area Studies Center. Prior to joining IDE-JETRO, he was Special Assistant at Embassy of Japan in Zimbabwe, Advisor at International Development Center of Japan, and Program Officer at Sasakawa Peace Foundation.  Mr. Hirano taught at University of Tokyo and University of the Sacred Heart, and was Visiting Researcher at University of the Witwatersrand in Johannesburg, South Africa.  He currently serves Board Member at Japan Consortium for Area Studies, and Sasaakawa Africa Association.  He has many publication in Japanese and English on Africa, including Africa: The Continent of Economy (2013), Africa’s Problem: The World History of Development and Aid (2009), The Impact of South Africa (2009) and African Economy Transformed by Firms: Expansion of South African and Chinese Firms (2006).  He obtained BA in Economics, MA in Economics from Waseda University and PhD in Global Studies from Doshisha University.