Skip to Main Navigation
This page in:_
publication July 20, 2017 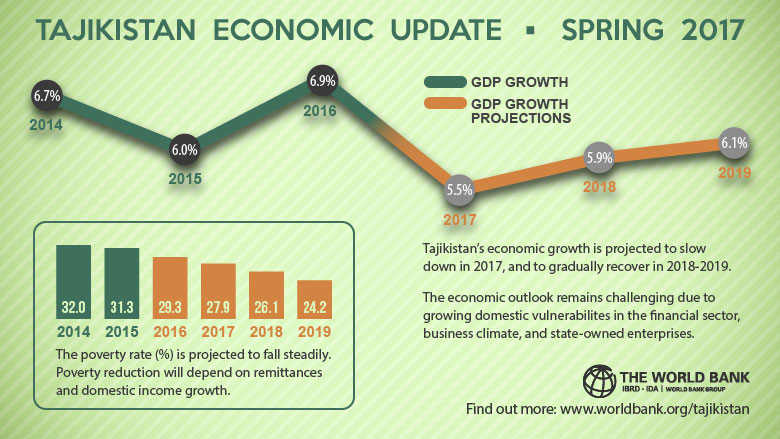 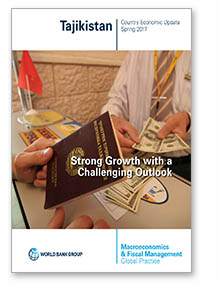 The spring 2017 edition of biannual Tajikistan Economic Update outlines the economic situation in the country and medium-term development prospects.

At the same time, the protracted decline in real remittances and the depreciation of the exchange rate, in the context of an improving but still complex external environment, led to the reduction of current account deficit.

Decreased trade activity resulted in a fiscal revenue shortfall, while the exchange rate depreciation contributed to a surge in non-performing loans, reversing previous fiscal consolidation efforts and causing substantial disruption to the performance of the financial sector.

On the upside, strong growth and rising wage income pushed down the poverty rate from 32 percent in 2015 to an estimated 30.3 percent by the third quarter of 2016, driven primarily by an increase in wage incomes.

In 2016, the Tajik authorities pursued expansionary fiscal policies, including through a considerable increase in foreign-financed capital investment in the energy sector, road infrastructure, and projects related to the country’s 25th anniversary of independence.

The government also stimulated domestic demand by raising public sector wages and social transfers. The exchange rate, although depreciating, stabilized throughout the year, following the introduction of administrative measures in February 2016.

Monetary policy was accommodative, supporting a heightened demand for local currency as the exchange rate stabilized and wholesale transactions that were previously conducted in foreign currency switched to local currency. Domestic purchases of monetary gold and the introduction of a surrender requirement on ruble-denominated transfers drove an increase in international reserves.

However, a disrupted financial sector and the subsequent bailout of Tajikistan’s two largest banks at end-2016 resulted in a deterioration of fiscal and debt sustainability indicators.

Although the external environment is expected to improve, rising domestic vulnerabilities pose a significant risk to maintaining robust economic growth.

Further poverty reduction will largely depend on economic recovery in Russia and domestic income growth. Continuing challenges in accessing credit by pro-poor sectors of the economy will diminish the pace of both poverty reduction and job creation in low-skilled sectors like construction and agriculture.

With an asset to GDP ratio of only 39 percent, Tajikistan’s financial sector is relatively small compared to those of other regional economies. Tajikistan’s deposit and credit penetration rates are below those of other regional economies – largely because of its troubled banking history and a legacy of government interference in operational decisions, which for years have distorted the effective allocation of resources.

Risks related to poor lending practices, including direct lending and inadequate risk management were further magnified by shortcomings in corporate governance and low capitalization levels in key banks. The onset of a recession in Russia in 2014–16 worsened the situation and several banks became insolvent.

At the beginning of 2016, the Tajik government decided to bailout the country’s two largest banks and to put two smaller banks under liquidation.

Since 2015, the National Bank of Tajikistan has introduced a number of reforms to strengthen its supervisory response and build new mechanisms for macro-prudential policy, financial stability, bank resolution, and consumer protection. The IMF, World Bank, and EBRD are actively providing assistance to the Tajik authorities on the resolution of financial sector problems.