A Comparative Analysis of the Socioeconomic Dimensions of LGBTI Exclusion in Serbia, based on an adaptation of the EU’s Survey on Income and Living Conditions (SILC) instrument, shows that certain socioeconomic outcomes of LGBTI people are worse than the general population’s.

The World Bank’s research on LGBTI exclusion has been focused on addressing an environment of sparse data, as well as raising awareness about the adverse socioeconomic effects of exclusion based on sexual orientation and gender identity (SOGI). Recently, we went a step further and tested a survey methodology that allows robust comparisons between the lives of LGBTI people and the general population. 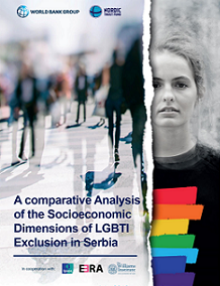 The report A Comparative Analysis of the Socioeconomic Dimensions of LGBTI Exclusion in Serbia is based on an adaptation of the EU’s Survey on Income and Living Conditions (SILC) instrument; a standardized household survey used regularly in Serbia to collect data from the general population on income, poverty, social exclusion, and living conditions.

What makes the methodology unique?

In total, 998 LGBTI people responded to the online survey and the data provide new insights on differences in the socio-economic outcomes of LGBTI people and a demographically similar subset of the general population.

The survey findings confirm the European Commission’s recommendation that Serbia needs “to step up measures to protect the rights of persons facing discrimination, including LGBTI persons, persons with disabilities, persons with HIV/AIDS and other vulnerable individuals.” A Comparative Analysis of the Socioeconomic Dimensions of LGBTI Exclusion in Serbia provides new data points on implementation gaps and can inform the country’s response to the European Commission’s recommendations. The data can also be used as a baseline for future action plans to measure the impact of reforms.

Click here to learn more about the World Bank’s work on SOGI inclusion.