Macedonia’s recent economic downturn appears to have bottomed out and there are early signs for a positive first quarter growth outturn. However, the outlook for a more substantial growth recovery appears to be fragile and uncertain. Industrial production increased in March by 4.2 percent (y-o-y), the second straight month since August 2011. This is largely reflecting a low base effect, as the previous year’s first and second quarter growth was negatively impacted by an unusually harsh winter. The positive industrial production outcome was a result of good growth in textile, machinery and equipment manufacturing, energy production and mining. However, some intermediate goods industries still remain in negative growth territory. For example, manufacturing of basic metals and non-metallic products is around 20 percent lower y-o-y.  Probably influenced by the wavering Euro zone business sentiments, business tendency indicators for March are down again, after having presented in January-February a cautiously positive assessment. Indices for the assessment of the current and future situation slid back to pre-January levels. Average capacity utilization in the manufacturing industry also slid back to end-2012 levels, to 59.9 percent. Inflation continued to ease slightly in March with y-o-y inflation standing at 3.1 percent (down from 3.5 in February) and period average inflation standing at 3.5 percent (down from 3.7 in February).

Exports and imports moderated again, after registering a small pick-up in January. Exports decreased in February by 2.3 percent, while imports increased slightly by 2.7 percent compared to January 2012. Import coverage by official reserves decreased in February back to December levels of 4.8 months, (compared to 5.1 months in January 2013). The current account balance at end-January 2013 was on the same level as in January 2012. After registering substantial growth during the second half of 2012, private transfers reverted back to normal levels in January 2013. They decreased by 14 percent (y-o-y) and 24 percent (m-o-m), while FDIs continued the upward trend that started in December 2012, largely as a result of reinvested earnings. A number of significant FDI production plants are under construction and are expected to be operational in the second half of the year.

Government continued its efforts to improve the maturity structure of its domestic debt. After having sold during March only bills in the amount required to roll-over its debt, Government issued during April a small amount of additional domestic debt, EUR19.4 million. Domestic debt issued during the first four months of 2013 accounted for 47.5 percent of total planned new issuance of domestic debt for 2013 and amounted to EUR121.2 million. All newly issued T-bills were either with six or twelve months of maturity (as opposed to three months). The interest rate for these T-bills was 0.4 percent lower compared to the average level for 2012.

The National Bank of the Republic of Macedonia released its 2012 Annual Report on March 25, 2013, confirming that adverse developments in the real sector, together with the high uncertainty about the pace of economic recovery negatively impacted the credit market. Credit growth slowed by the end of 2012 to 4.8 percent, from the average of 7.5 percent in 2010-2011. The report points out that the banking sector remained solvent and has adequate liquidity. Overall banks’ profitability stayed the same in Q4 2012. The banking system ended 2012 with an unchanged Return on Assets (ROA) since Q3 of 0.4 percent. Medium and large sized banks reported similar ROA, only small banks registered a small decrease. The Return on Equity indicator had improved in Q4 2012 and stood at 3.8 percent compared to 2.3 percent in Q3. The three biggest banks managed to increase their share in total loans and deposits at the expense of medium-sized banks. The report highlights a change in bank customers’ preference to keep deposits in national currency. As a result, denar deposits exceeded foreign exchange deposits by end June 2012 and contributed by the end of the year 54.5 percent of total deposits. The growth of non-performing loans (NPLs) and the weakened creditworthiness of the corporate sector are mentioned as the most significant challenges.

Non-performing loans continued to be at high levels during March, weakening banks’ willingness to increase lending. NPLs remained at comparable levels as registered in February (11.7 percent) and stood at the end of March at 11.6 percent (up from 10.8 percent in January). This reflects the highest levels since September 2006. The number of blocked accounts of distinct depositors had been on the rise since August 2012, and even though somewhat decreasing in intensity starting from January 2013, it was still rising by 480 depositors per month in the first three months of 2013. By end March 2013 the total number was more than 71,000 out of which 54.5 percent were legal entities. The number of blocked legal entities amount to more than half (52.1 percent) of all active legal entities (increasing by 1,853 since March 2012). Credit growth fell for the seventh consecutive month, even though still positive (y-o-y). Nominal credit growth during March was around EUR23 million. 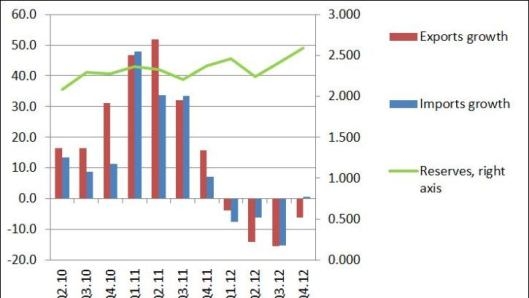 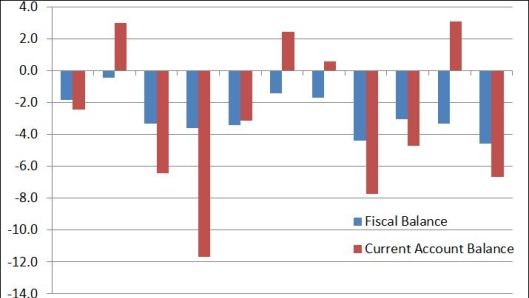 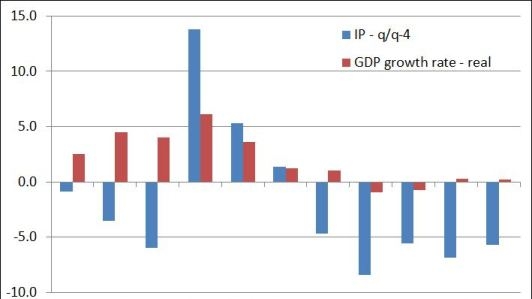 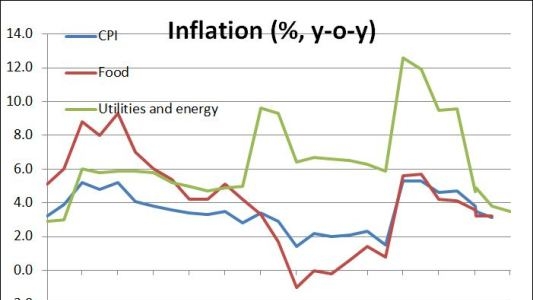