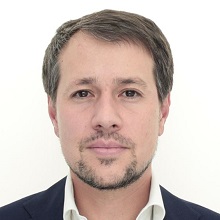 He is a lawyer who received his Bachelor Law Degree from Universidad Complutense de Madrid. He also holds a Master of Science in Foreign Service (MSFS) with a concentration in International Relations and Security from Georgetown University.

He has served as advisor to a member of the European Parliament in Brussels and worked in the United States Senate with former Senators Norman Coleman Jr. and Joseph R. Biden Jr., currently President of the United States of America.

Santiago also served as consultant and research fellow at the Inter-American Development Bank (IADB) where he worked as assistant to the former President of the Bank, Luis Alberto Moreno and the Vice-Presidency for the Private Sector. During this time, he also worked at BID INVEST (former Inter-American Investment Corporation, IIC) where he supported the equity investment team in developing the China-IIC Investment Fund.

Throughout the past years Santiago has worked as a consultant and business development agent in the Oil & Gas and Renewable Energy sector.

Santiago is married and is father of two girls.