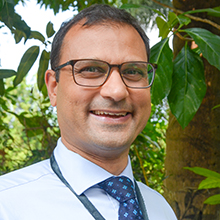 Hans Anand Beck is a macroeconomist with 20 years of experience working on economic development issues. He is currently the World Bank Lead Economist for Myanmar. Before this he held several positions at the World Bank, including Senior Country Economist for Indonesia and advisor to the United Kingdom Executive Director to the World Bank and IMF, through the aftermath of the global financial crisis. He has also worked as a Country Economist for the UK Department for International Development and the European Commission, working in countries such as Vietnam, Pakistan and the Congo (DRC). Hans started his career as a Fellow with the UK’s Overseas Development Institute. He holds an MSc Econ and BSc Econ from the London School of Economics and Political Science.