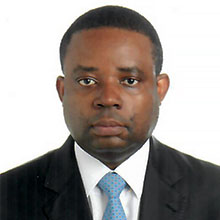 Prior to this appointment, Mr. Manuel served as Minister of Finance of Angola from 2013 to 2016. He also held various senior level positions, including Economic Policy Advisor to the President and Chairman of the Angola Sovereign Wealth Fund. At the Ministry of Finance since 1993, he led the Department of Treasury's Operations in 2003 and lately, in 2006, became the National Director of Treasury.

Mr. Manuel graduated in 1996 in economics (BSc) from the Agostinho Neto University in Luanda, Angola, and holds a MSc in economics from London Guildhall University in London in 2001, United Kingdom. In 2014, Mr. Manuel was awarded Finance Minister of the Year by the African Banker Organization.