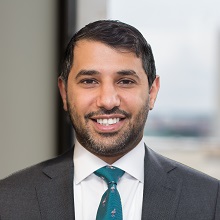 Mr. Alkhalaf is currently the Chair of the Audit Committee of the WBG Executive Board, which oversees WBG finances, accounting, risk management, internal controls and institutional integrity. He is also participating in other WBG Executive Board’s standing committees.

Prior to joining the WBG Board, he worked as Economist in the Ministry of Finance of Saudi Arabia, where he worked on several economic and financial policy issues and a variety of topics on the G20 agenda, including representing Saudi Arabia in the G20 Development Working Group. He started his career in the banking sector in the credit-risk-rating field.