September 30, 2016
World Bank Group
After the devastating earthquake in January 2010 that left hundreds of thousands dead, hundreds of thousands more displaced, and the Ministry of Education (MOE) in ruins, the government’s main goal was to keep schools functioning so that primary school children could continue their education without interruption. To achieve this goal, the Project paid teacher’s salaries in 2,824 schools, provided school lunches and de-worming to 62,000 children and funded tuition for 93,624 children.

After the earthquake, there was a high risk that schools in affected areas would close because of damage to the buildings and because families would not be able to pay tuition.  Without compensation, teachers would be likely to leave the schools and pursue other occupations.  Not only would students lose the remainder of the current 2009/2010 academic year, but persuading teachers to return to the schools after leaving would be a serious challenge.  In an environment where qualified teachers were already in short supply, subsequent school years would also be in jeopardy. With a high poverty rate (78 percent) and many students undernourished, there was also an urgent need to ensure adequate nutrition of primary school students.

The government, with the support of the Bank, helped design a quick disbursement component to get urgently needed funding to schools through teacher compensation.  Through this strategy, teachers were paid, keeping them in the schools and ensuring that the schools stayed open and had funding for other essential activities.  In the following school year, when the emergency had ended, the Project re-focused on payment of tuition for poor students (Tuition Waiver Program-TWP) and the school feeding program (morning snack and lunch). The Bank was already financing two other government projects that had successfully funded tuition so the government and the Bank were familiar with implementation and had determined that these interventions were a good value for money.  The Project approach also recognized the need to restore human and technical capacity to the destroyed MoE and provided resources for the MoE to monitor the implementation of the teacher compensation, tuition and school nutrition components.

The Project provided critical funding to:

Without this funding, schools would not have been able to hold classes for the vast majority of these students.  In addition to access and equity benefits, the Project also produced some quality and governance benefits. Quality benefits were realized in the form of a 10 percent reduction in grade repetition (grades 1-6) and a 9 percent reduction in the incidence of overage students (grades 1-4).  Governance benefits were realized as a result of Project funding to bolster monitoring capabilities of the MoE. Eight of nine directors of Regional Education Departments reported that without the transportation and computers provided by the Project, they could not have carried out their core implementing and monitoring responsibilities.

Moreover, almost all of the Project’s resources went to final beneficiaries (students, teachers and schools).  The economic analysis of the Project estimated an 11.8 percent internal rate of return based on the wage value of an additional year of school.  The net present value at 8 percent was US$16.6 million supporting substantial the Project’s value for money.

" Look at my face, it radiates. I believe that I benefit more from the program than my children themselves. My condition in life has considerably improved since the Tuition Waiver Program has enabled me to educate my children for free. I do not know how to thank them for all of this. God alone will be able to repay them.  " 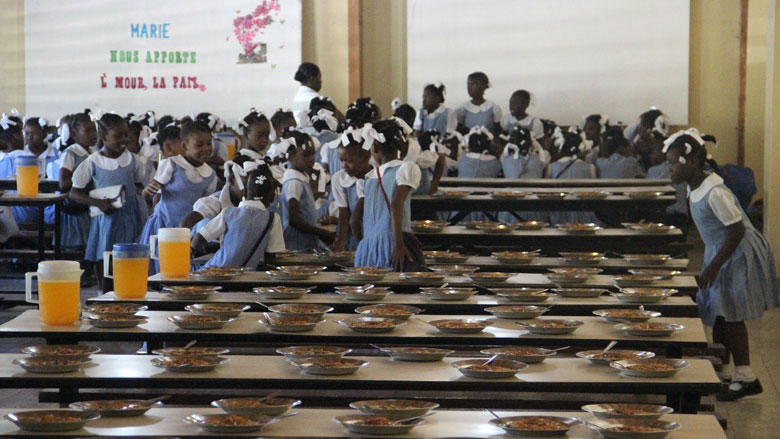 Berdine Edmond/ World Bank
" I am an ex-member of the Armed Forces of Haiti. When the corps was disbanded, I found myself unemployed from one day to the next. I could not manage to pay the schooling fees of my two sons. One day, I was in the field when I saw them coming home during school hours. They told me that they had been sent home for failure to pay.” So I hurried to the school director and promised to pay the arrears within two weeks. The deadline arrive, and I still could not find a way to pay the full amount due so the children were sent home once again. My heart broke when my older son said to me : Papa, losing a few days of class doesn’t bother me. It’s leaving class with my head bowed in shame with all my classmates watching, that’s what really hurts me. I feel humiliated every time. Since then I resolved to do any work whatsoever to avoid subjecting my children to these humiliations. Today, I have my two children in primary school, and I still do not have stable employment. But thanks to the Tuition Waiver Program, I am happy to not have to do degrading work to save the honor of my children.  "

Through the Global Partnership for Education (GPE), the Catalytic Fund (CF) provided US$22.0 million in support to primary education, with the Bank as the supervising entity.  The Bank’s prior experience in providing funding through resource transfers to primary schools was key to successful project implementation. This experience allowed the Bank to more effectively address implementation challenges including school selection criteria, delivery of school lunches and procurement of goods and services in Haiti.  The Bank’s analytical work was also important in measuring the benefits to tuition waivers and revealed additional benefits in education quality of the TWP.

The Project was funded entirely by the Education for All Fast Track Initiative Catalytic Fund which included contributions from over 20 countries.  The Project’s implementation was supported by the participation of the GPE, along with Bank staff, in supervision missions. Project implementation was harmonized and incredibly smooth because the same project coordination unit as the earlier Bank-financed Education for All projects was used for this operation.

Key activities carried out under the Project were also supported by the second Education for All (EFA-2) project (2011–2017), which continues to fund tuition waivers and school health and nutrition programs. EFA-2 is funded by IDA, a second GPE grant, the Canadian Government, and separate parallel financing by the Caribbean Development Bank. A new IDA operation, Providing an Education of Quality in Haiti, is under preparation and will further develop a number of activities of the Catalytic Fund (CF) project including school grants to waive tuition (through a result based financing model), improvements to educational quality and governance, and building capacity at the Ministry of Education (MENFP).