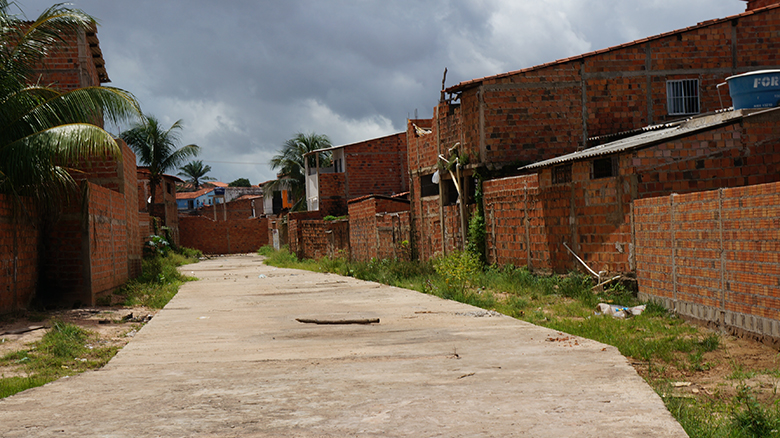 At project appraisal in 2007, 50 percent of heads of household in Sao Luis Municipality – capital of one of Brazil’s poorest states - lived in poverty and 10 percent were destitute. Despite high unemployment, the city continued to attract migrants, many settling in crowded, peripheral, low-lying areas along estuarine waters of the Bacanga Basin, a catchment area of 132 km2 important to economic activity and the focus of project activities. These low-income, flood-prone settlements had grossly inadequate housing, water supply, sanitation, drainage and solid waste management services. The Bacanga Dam constructed in the 1970s to reduce large tidal variations and permit consolidation of upstream urban infrastructure was in disrepair and poorly-operated, causing periodic flooding of these settlements, degraded water quality from uncontrolled domestic and industrial effluent pollution and other environmental hazards. Successive Municipal Governments had targeted the Bacanga Basin for urban upgrading.

The Bank used an integrated, multi-sector, participatory approach to address the main urban and environmental challenges affecting quality of life in and sustainable occupation of the Bacanga Basin. This included: urban works complemented by parks, squares and sports facilities to boost sustainability and prevent informal occupation of open areas; resettlement of flood-risk populations in new housing; environmental policy formulation, licensing and education; and local economic development through strategy formulation and execution, training, and tourism sector support.  The approach was complex, risky and overly challenging for the Municipal Government of São Luís, a first-time Borrower, limiting project achievements. Works essential to project objectives were to be wholly counterpart-financed under Federal Government programs. Success depended on collaboration between the State and Municipal Governments, e.g., restoration of the Bacanga Dam and other key works were a State responsibility, dependent on the political relationship and other factors. Institutional capacity issues persisted. Despite important successes and a massive Bank-Borrower collaborative effort, achievements fell short of expectations.

Primary project results were as follows by project closing on October 31, 2015:

●     The project-financed Competitiveness Enhancement Plan saw the Tourism Cluster targeted for market development: selling São Luís as a “brand”; efforts to increase foreign tourism; a Portal fostering industry articulation and cooperation; and, agreements between the Secretariat of Tourism and foreign airlines to promote São Luís.

●     As a direct multiplier effect, São Luís Municipality in 2016 developed a US$12.0 million first-stage project with the Inter-American Development Bank (IDB) to rehabilitate its Central Historic District.

●     Over 19,500 people improved their living conditions via drainage works rehabilitating the Rio das Bicas and Coroado Canals; 141 flood-risk and works-affected families received new housing with another 417 families positioned to resettle once their units are completed; and, 5,450 families are using new parks, plazas, sports facilities and renovated local roads.

●     Overall project complexity, institutional capacity, a shorter than optimal project engagement period and other factors meant that planned water and sanitation (WSS) works were incomplete, the Bacanga Dam was not rehabilitated and other urbanization interventions did not progress.

Total project cost was US$26.64 million, of which the Bank provided US$23.44 million and the  Borrower contributed the remaining US$3.20 million. At closing, Bank Loan-financed works had fared much better than those financed with Borrower counterpart funds.  Most of the latter remained unfinished and/or stalled, suggesting inter alia, the potential risks in having key works essential for achieving project objectives wholly-financed by counterpart funds.

The Bank sought to promote collaboration between the State and Municipal Governments through formal agreements to ensure the completion of critical works within the State’s jurisdiction: primarily water and sanitation, and rehabilitation of the Bacanga Dam.  These agreements could not ultimately guarantee that those works would be executed. Similarly, encouraging the Borrower to access counterpart funds from important Federal Government programs did not factor in their different eligibility, processing and scheduling elements, and could not have predicted the economic downturn in Brazil which severely restricted program budgets and the flow of financing to project works.

A follow-on, Bank-supported operation in São Luís Municipality is not under consideration.  However, with poverty an increasingly urban phenomenon in Brazil, the urban space remains a priority if the Bank is to focus on its “twin goals” of poverty reduction and shared prosperity. For this Project, a 2015 Bank/Borrower Management Letter agreed on measures essential to complete all unfinished works.  The national fiscal crisis may intervene but institutional stakeholders had most required inputs in place at closing: water supply and sanitation (WSS) as well as urban upgrading works ready for procurement; secure funding for WSS on the Left Bank of the Bacanga Basin; and, on the Right Bank, similar works still in the budget pipeline. The Municipality has retained its experienced core project team. The Bank will continue to monitor involuntary resettlement until all planned housing is completed and target beneficiaries have moved in. The political impasse affecting the Bacanga Dam is unlikely to be resolved soon. Municipal operation and maintenance of renovated canals is underway.

The planned Satisfaction Survey was not conducted and hence the direct testimony of local beneficiaries is not available. The primary targeted beneficiaries were very poor families located in eight neighborhoods of the Bacanga Basin of São Luís Municipality, with exceptionally poor urban services and environmental conditions.  Photos shown in the Multimedia section below illustrate the dramatic transformation in local living conditions resulting from project-financed works and the improved environment for the daily activities of affected communities.