IDA and Gender: Progress, Results, and Next Steps 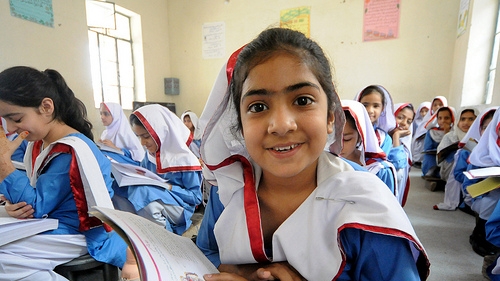 The World Bank is helping expand access to quality education in Pakistan and promote better governance and accountability in the education system.

The International Development Association (IDA) has traditionally supported countries to address gender issues that hinder development and poverty reduction, guided by the 2001 World Bank Strategy. This effort was intensified with the launch of the Gender Action Plan (2007-2010), which aimed to increase gender coverage in economic sectors. IDA’s support to gender equality in its projects and in the overall World Bank Group agenda has increased significantly since gender was identified as a special theme of its 16th replenishment (2011-2014, totaling US$49.3 billion for this period) and, in 2011, the Bank launched World Development Report 2012: Gender Equality and Development. In FY12, 100 percent of IDA Country Assistance Strategies and 86 percent of IDA projects were gender-informed; and, significant progress has been made in integrating and tracking gender dimensions in IDA’s support to education, reproductive health, safety nets, agriculture and rural development, and fragile and conflict-affected countries.

Gender inequality is manifestly unfair. It is also bad economics: under-investing in women and girls puts a brake on poverty reduction and limits economic and social development. There has been major progress in health and education over the past three decades: two-thirds of all countries have now reached gender parity in primary education, fertility rates have declined, and life expectancy for women has increased substantially.

Yet, serious gender disparities persist. Sub-Saharan Africa and South Asia, for example, still see maternal mortality rates comparable to that of Northern Europe in the 19th century. Wage gaps and gender segregation in economic activity are pervasive—for example, women agricultural workers, especially in Africa, operate smaller plots of land, have less access to essential inputs such as fertilizer, are limited in their access to credit, and farm less remunerative crops, leading to less overall productivity. Globally, only one in five national parliament members is a woman and an estimated one in ten ever-partnered women will be abused by a partner in her lifetime. In some cases, there is a reverse problem, in over one-third of countries, girls significantly outnumber boys in secondary education.

The World Bank Group has focused on gender since 1977, when it appointed  its first Women in Development Adviser. In 1995, then-President Jim Wolfensohn chose to give his first major speech at the Fourth World Conference on Women in Beijing, proposing universal primary education for girls and boys by 2010. The Bank adopted a mainstreaming strategy in 2001, and in 2008, then-President Robert Zoellick called for an increase in IDA investments toward gender as one of his six commitments on gender equality.

Gender was identified as a special theme for the 16th IDA replenishment which mobilized funding for the IDA16 implementation period FY  2012 – 2014. IDA committed to strengthen gender mainstreaming in its operations and analytical work through specific gender-related deliverables in these countries over the three-year period.

Among the deliverables was the completion and launch  in September 2011, of the World Bank’s World Development Report 2012: Gender Equality and Development (WDR 2012), which provided much-needed evidence documenting areas of progress and  remaining gender gaps globally.

Disparities in gender equality come with economic costs, shortchange the next generation, and lead to suboptimal institutions and policies. Studies show that progress in this area benefits everyone, not just women and girls. Economies thrive; women, men, girls, and boys have access to equal opportunities; and communities prosper when women and men are equally empowered.

Under IDA16, the Bank made specific commitments to accelerate progress on gender mainstreaming and gender-related MDGs, and introduce a robust results framework to track this progress. The actions are as follows:

The World Bank Group is already seeing marked improvement in the quality and volume of gender-informed work in response to the IDA16 commitments and the strategic directions based on the recommendations of the WDR 2012. The work is far from over, however, and continued attention to issues of gender equality in IDA and across the Bank Group is crucial to ensuring that gains are not temporary and that gender equality remains everyone’s business.

A number of projects have achieved positive gender results, and promising new projects are getting off the ground that specifically target women and girls as beneficiaries.  A few examples are below.

In Punjab, Pakistan, home to 60 percent of the country’s population, the Bank is helping expand access to quality education and promote better governance and accountability in the education system. Under the government’s Bank-supported program, more than 400,000 eligible girls receive targeted monthly stipends tied to school attendance; and the government supports approximately 2,000 low-cost private schools serving nearly a million low-income students. This is in a broader context where the primary net enrollment rate increased from 50 percent to 54 percent since 2007 and the ratio of female-male primary net enrollment rose in rural areas from 61 percent to 76 percent.

Tajikistan faces high stunting rates, the result of under-nutrition, a condition exacerbated by the 2008 food price shock. To mitigate the risk of malnutrition, the Bank-supported community and basic health project provides food packages and micronutrient supplements to approximately 50,000 women, infants and children under age 5. By mid-2011, the project had trained 1,000 primary healthcare workers and 300 community volunteers to deliver education on breastfeeding, good nutrition and care of sick children to 1,000 pregnant woman, and micronutrient supplements and vitamins had been delivered to approximately 44,000 women and children.

The IDA-funded US$150 million Water and Sanitation Service Improvement Project, approved in 2007, is supporting Kenya’s efforts to expand access to safe water and sanitation services. The project initiated a capacity building program targeting 24 utilities. One example of the project’s aim to improve access is the Githunguri Water Company which, following the utility training, changed its connection policy. It no longer requires women to provide title deeds to secure a connection or to register under their father’s or husband’s names. Meters can now be rented and connection payments made by installments. As a result, between January and May 2011 the company received 18 applications from women. Following the change of policy and awareness creation, within six weeks 50 women had signed up for new connections and 29 had been connected. Similar efforts were recorded with the Kiambu Water Company which reduced connection fees from US$93 to US$67 and made it payable by installments, targeting increased applications from women.

The Ministry of Water and Irrigation (MoWI) in Kenya won second place in the United Nations Public Service Award (UNPSA) in 2012, in recognition of its work to promote gender-responsive public service delivery.

In Liberia, the Adolescent Girls Initiative “Economic Empowerment of Adolescent Girls and Young Women” targets 2,500 young women age 16 to 27 in Greater Monrovia and Kakata City at the critical school-to-work transition stage. The program consists of six-months of classroom training followed by six-months of placement and support (including micro-enterprise advisory services and internship and job placement assistance). The aim is to smooth the transition from the classroom to wage or self-employment. About 65% of the girls were trained in business development skills and roughly 35% were trained in job skills. All girls also received life skills training. Post-training all graduates enter a 6-month support period where they are assisted with job searching and placement or otherwise supported to start their own businesses.

More than eleven years after the fall of the Taliban, improving the lives of women in Afghanistan remains a critical challenge. One of the more ambitious efforts has been led by the National Solidarity Program (NSP), a community-driven development project which covers 30,000 villages across Afghanistan. NSP includes special provisions to promote gender equality, such as establishing a gender-balanced village development council and requiring female participation in council elections and in the selection of village projects.

In Bolivia, the Urban Infrastructure Project (2006- 2010) aims to achieve sustainable improvements in the urban infrastructure and living standards in the poorest neighborhoods of La Paz, to enhance mobility in the city of El Alto, and to expand sewerage coverage in poor areas of Santa Cruz de la Sierra. Some early benefits of this project include a reduction in violence against women resulting from the installation of indoor sanitation facilities and street lighting; an expected enhancement of women’s economic opportunities due to the construction of childcare facilities and community centers; and pedestrian friendly infrastructure which took into account the needs of women, the elderly, and children.

The Burundi Health Sector Development Support Project (US$25 million), is a national results-based financing program which has helped to increase utilization of reproductive health services. It saw an increase in facility based births by 25 percent; an increase in prenatal consultations by 20 percent; a 35 percent increase in curative care consultations for pregnant women; and a 27 percent increase in family planning services obtained through health facilities during its first year of implementation (FY11). Knowledge efforts include Demographic Dividend in African Countries which focused on addressing the policy implications of population growth and economic development, identified country-specific factors for capturing the demographic dividend, and estimated the expected size and duration of the additional population and economic growth.

The Safe Motherhood Vouchers Program has provided services to poor households in Sana’a, Yemen, through vouchers aimed at pregnant women. The project enrolled 9,500 poor eligible women and delivered births to about 7,000 cases. The political climate and security concerns have slowed work in 2012 and have created additional barriers to improving health outcomes, as witnessed by the closure of health centers in Yemen (for example), which will need to be reviewed and addressed moving forward.

And, finally, a $50 million IDA operation in Ethiopia, the Women’s Entrepreneurship Development Project  promotes small and medium enterprises owned or part owned by women, through access to microfinance, developing entrepreneurial skills, technology and cluster development, training in project management, advocacy and outreach, monitoring and evaluation, and impact evaluations to provide lessons about what works.

In Fiscal Year 2012, approximately US$12.9 billion, or 90 percent, of IDA commitments were gender-informed.

World Bank Group is ramping up its gender work and policy dialogue in all regions and sectors through Regional Gender Action Plans, Country Assistance Strategies, and a greater emphasis on measuring results, improving data coverage and working in frontier areas.  The IDA16 commitments will continue to be tracked, and gender will continue to feature as a prominent area of focus beyond the IDA16 implementation period.

World Bank President Jim Yong Kim has made strong commitments on gender, highlighting a need for better data that measures equality for women and girls. In this vein, the World Bank is committed to improving data collection in 10 countries this year, in key areas such as women's earnings, property ownership, and political voice. Next year, the World Bank will target 10 additional countries, and add more each year.

A gender companion to the 2013 World Development Report on Jobs will be completed in mid-2013, and a new report on Women’s Voice, Agency, and Participation will be released in Spring 2014. Additionally the third edition of the World Bank Group’s Women, Business and the Law report will be released in Fall 2013, updating and expanding on the existing data, including new economies, and adding information on violence against women legislation. This underlines the World Bank’s long-held assertion that these issues matter intrinsically and that addressing them is the smart thing to do, because inequality is costly, and increasingly so in a globalizing world.

100%
of IDA Country Assistance Strategies were gender-informed in FY12