January 28, 2013
The Competitiveness and Enterprise Development Project (CEDP) worked to provide services to small and medium enterprises (SMEs), improve the legal environment, improve efficiency in the utilities and tea sectors through privatization, and create an investment climate to facilitate business in a formalized and robust private sector. Private investment as a share of gross domestic product (GDP) increased from 3.4 to 14 percent from 2001 to 2011, the percent of the population with electricity has risen from 4 percent in 2001 to 14 percent, and tea estate privatization increased export earnings from $22.7 million in 2001 to $55.7 million in 2010.

The aftermath of Rwanda’s devastating 1994 Genocide brought about a new government dedicated to moving towards a liberal, market-based economy to transition the country from conflict and emergency to peace and sustainable development. However, administrative and regulatory constraints, legal and judicial impediments, a weak financial sector, weak SME institutions, and a lack of innovation and competitiveness all stunted Rwanda’s potential private sector development and growth. Infrastructure supporting telecommunications, postal, water, and power services was inefficient, costly, and controlled by monopolistic public enterprises. The electricity sector required privatization and the National Post Office was in financial duress. Finally, the tea sector suffered from high costs and low yields, despite contributing to a third of total exports and being one of the few sectors providing regular cash income to farmers at the start of the project.

The CEDP worked to remove legal impediments to private sector development by strengthening the Arbitration Center, the newly established Investment Promotion Center and the Center for Assistance to Small and Medium Enterprises. The project also laid the groundwork for strengthening access to finance with a comprehensive review of the legal and regulatory framework to do business, a financial sector assessment, supporting bankers’ training, and restructuring the Rwandan Banking Union, while providing credit lines in some banks. Additional financing was sought to modernize the financial payment systems, establish an Accountant Institute (ICPAR), and strengthen microfinance institutions. The project established a multi-sector regulatory agency to deal with a multi-operator market as it facilitated privatization, lowered factor costs, and improved accessibility to the two main public utility companies and the postal sector. The project also supported the incorporation of nationals and key stakeholders in the ownership of tea factories and estates through privatization, encouraged farmers to assume commercial and technical management of their production, and established an independent Tea Board. Finally, the project assisted the newly established Private Sector Federation which included information dissemination campaigns on HIV/AIDS.

The project helped create a more efficient financial and private sector, leading to a higher rate of economic growth in Rwanda:

The International Development Association (IDA) contributed $22.14 million to the development of the business and legal environment, $11.07 million to reducing costs and improving efficiency, $820 thousand to improving the efficiency of the tea industry, and $7.2 million to supporting the Private Sector Federation and project coordination. An additional $6.0 million IDA grant was also provided.

This project featured a wide range of in-country partners. The National Bank of Rwanda, the Association of Microfinance Institutions of Rwanda, the Rwanda Utilities Regulatory Authority, the National Export Agriculture Board, the Rwanda Bureau of Standards, the Energy, Water, and Sanitation Authority, and the Rwanda Private Sector Federation all played key roles as implementing agencies. Additionally, the Ministry of Justice and the Rwanda Development Board (formed during project through merging of eight institutions) supported and participated in implementation and oversight.

The knowledge and experience fostered by the CEDP will contribute to sustain reforms in the business environment and in financial services, and the government should continue to finance the Doing Business Unit to ensure the sustainability of investment climate reforms. A follow up operation to the CEDP was presented in 2012 to sustain support to government agencies working in export diversification and competitiveness for the horticulture and tourism sectors. Finally, the African Development Bank (AfDB) financed the CEDP II from 2008 to 2012 to support the Rwanda Development Board and the National Bank of Rwanda.

Private sector associations benefited from support of the Private Sector Federation and young entrepreneurs through the Business Plan Competition. In addition, 25 government institutions were project implementing agencies and beneficiaries. 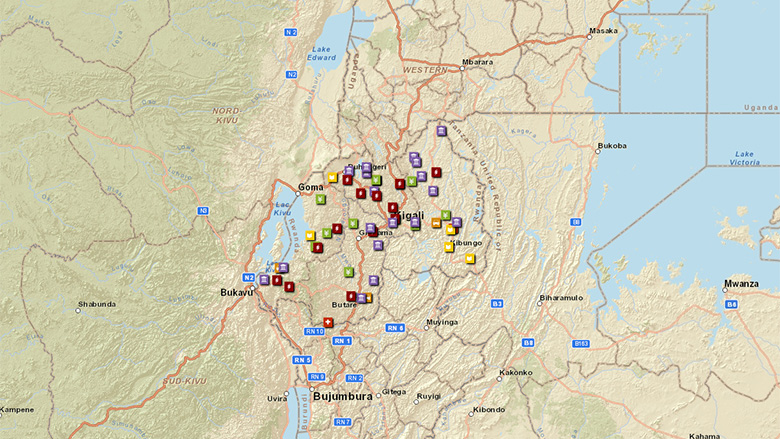