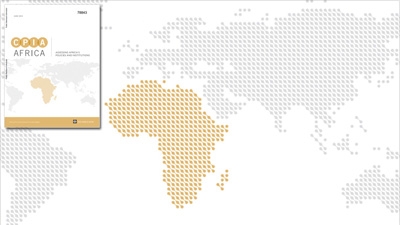 WASHINGTON, June 27, 2013—As growth in Africa continues, there is a need to assess the progress African countries are making toward strengthening the quality of policies and institutions that underpin development.

The World Bank’s latest Country Policy and Institutional Assessment (CPIA), has been measuring and tracking the strength of policies and institutions in Sub Saharan African countries since 1980, and releasing that information since 2006.

The CPIA examines 16 key development indicators covering four areas: economic management; structural reforms; policies for social inclusion and equity; and public sector management and institutions. Countries are rated on a scale of 1 (low) to 6 (high) for each indicator. The overall CPIA score reflects the average of the 16 indicators.

For 2012, the year measured, results were mixed.

“The report finds that at the aggregate regional level, African countries showed a fair amount of resilience in terms of quality of policies and institutions, generally suggesting a prudent approach to economic management,” said Punam Chuhan-Pole, Acting Chief Economist for the World Bank’s Africa Region.

But, according to Chuhan-Pole, among the individual countries, there is divergence.

Of Sub Saharan Africa’s 39 poorest countries – countries that receive grants and zero-interest loans from the World Bank’s International Development Association – 11 countries showed an increase in quality of policies and institutions, while 12 saw a decline.

The overall score for Sub Saharan was steady at 3.2.

Cape Verde and Kenya had the highest scores at 3.9, although Cape Verde saw a decline in its CPIA for the third year in a row. South Sudan and Eritrea—both countries that suffer deep policy challenges—had the lowest scores with 2.1 each. Countries recovering from conflict—such as Cote d’Ivoire and Comoros—have shown solid improvement, despite conflict and political instability having weakened policies and institutions.

Until recently, the CPIA was used mainly to inform research and to inform the International Development Association’s allocation of resources to poor countries. Today, the CPIA is a potentially valuable resource for governments, the private sector, civil society, researchers and the media as a tool to monitor their country’s progress and benchmark it against progress in other countries.

“This report aims to provide citizens with information that can support an evidence-based debate that can, in turn, lead to better development outcomes,” said Chuhan-Pole.

The scope of the CPIA is motivated by the World Bank’s Open Data Initiative and the new Africa Strategy, both of which seek to foster participation in development from a wide range of stakeholders by providing broader access to data and knowledge.

Main Findings of the CPIA