Remarks by Albania Country Manager at a Road Safety Conference

I would like to thank you for the invitation to join this important conference. I found the topic of road safety in Albania and the EU benchmark as highly relevant for encouraging better safety standards in the country. Roads are an important public asset and provide essential links for goods, services and human mobility. They contribute to economic growth and job creation by enhancing mobility and movement of goods and services. They provide communities with access and boost connectivity within the country and between and among countries.

The road network in Albania constitutes one of the highest public asset value, estimated at about US$ 6 billion, with substantial increases over the last decade. Today, Albanians are well connected to each other and to neighboring countries. As you know, prior to the 2008 global financial crisis, Albanian was the fastest growing economy in Europe with growth rate averaging 6 percent. High economic growth was fueled by heightened domestic consumption and economic activity in the country. Albania also saw increased traffic volumes, increase in private vehicular movement and commercial movement - and a corresponding rise in the national road network. The focus has been on new infrastructure development, and there has been tendency to give less priority for sustainable asset management and maintenance - a key requirement that also contributes to road safety.

In Albania, recurrent expenditures averaged only 10 percent of total transport expenditures over the period 2007-2011, or about US$ 3 million, and this is about 30 percent of what is needed for routine and winter maintenance. Albania spends an average of 3,000 Euros/km on the national road network, which is insufficient and low compared to other countries in the region (between US$ 5,000 and 7,000 Euros/km). In addition, there is irregular monitoring of road conditions, little information on traffic volumes, or axle loads, or black spots. In addition, there is need to update roads inventory and address safety problems. Increased traffic volumes, insufficient maintenance expenditures have led to a deterioration of the roads network thereby increasing accident risks.

Although the number of accidents have reduced in recent years, Albania still compares unfavorably with countries in the region or EU member states with more than 70 fatalities per 100,000 vehicles - while it is 41.3 in Montenegro, 13.8 in Greece 32.9 in Serbia, or 7 in Germany, 8.5 in France, and 6.2 in UK. Furthermore, the number of seriously injured has increased. According to the Global Burden of Disease Study road traffic injuries rank in fifth place, among other illnesses/causes, as the leading cause for years lost.

Another important aspect is that low-income groups may be particularly vulnerable to the secondary impacts of road trauma. The medical treatment of a victim, for example, may continue over many years, or even for an entire lifetime. Without a secure and sustainable source of revenue, poor and vulnerable households have an increasing inability to overcome trauma. A Poverty and Social Impact Analysis (PSIA) was carried out by the World Bank to assess impacts of road fatalities and accidents on the poor. It concluded that in Albania the highest burden of injuries and fatalities is borne disproportionately by the poor - pedestrians, passengers of buses and minibuses, and cyclists.

Government has recognized the urgency of addressing these issues and is focusing on asset maintenance and road safety. It has increased its attention to road safety reforms, and has adopted a Road Safety Strategy and Action Plan as well as adopted a mandatory Road safety audit for all new roads. In addition, vehicle inspections and rectification of black spots are receiving attention. The National Road Safety Strategy 2011 – 2020 is in line with the Regional Road Safety Strategy developed by South East Europe Transport Observatory (SSETO), aiming to improve road safety in the country to the levels of the best-performing EU countries, as well as to establish a positive trend of a continuous decline in the number of fatalities and injuries. The Government target is to reduce road traffic fatalities by 50 percent by 2020 compared with the 2009 baseline - which means to reduce it to 50 fatalities/100,000 vehicles.

The World Bank has been supporting Albania's efforts in the transport sector.  During the past two decades, the Bank has provided $200m which helped to construct, repair or maintain more than 1700km of national and rural roads. At present, an $80 million Results-based Road Maintenance and Safety Project is under implementation with the objective to support Albania's efforts to maintain road conditions and improve the safety of the National Road Network, strengthen sustainable and efficient road asset management and safety practices. The project will support road safety by strengthening the capacity of the Inter-Ministerial Road Safety Council (IMRSC), introducing road safety audit training accreditation courses, supporting media campaigns, and enhancing the Accident Information System.

Some internationally accepted best practices, such as identifying a lead agency to guide road safety efforts, and preparing a National Strategy and a Plan of Action are the right steps to be undertaken. Much more concerted effort is required in terms of allocating financial and capable human resources, active monitoring and mobilizing and motivating relevant institutions – other than transport and police – to jointly implement the Plan of Actions.

Road safety is a shared responsibility, which does not belong to one institution or only to the Government. It must involve all users, NGOs, professionals & industry.

This event is an excellent contribution to road safety agenda, and an example of how public events sponsored by the private sector can increase awareness. I hope this conference will provide recommendations to further improve road safety standards in the Albania based on best regional practices and in other EU countries. 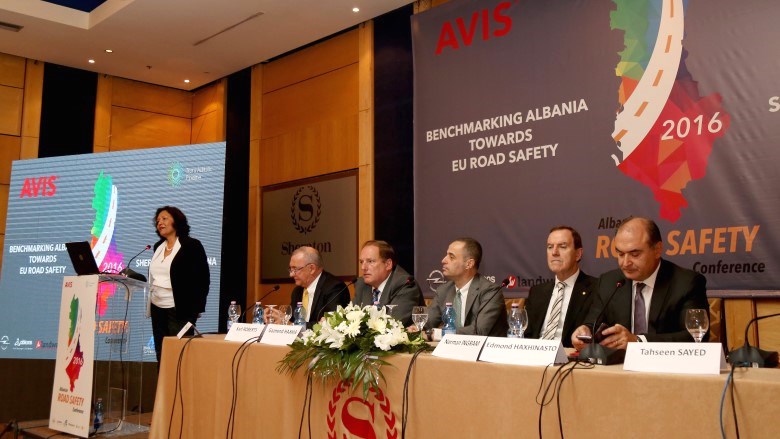