Pakistan recently adopted a new poverty line which sets a much higher bar for inclusive development. This is a historic decision on its own, but the level of collective thinking and collaboration between various arms of the government and other stakeholders that went into the process calls for special applause. The new line, which uses an improved methodology, sets a minimum consumption threshold of Rs. 3030 per adult equivalent per month. This translates to Rs. 21,000 per month for a household at the poverty line, allowing nearly 60 million people to be targeted for pro-poor and inclusive development policies.

This new poverty line acknowledges that as societies develop, the minimum standards for a productive life, for personal dignity and for social acceptability also change—and all societies that aim to build democratic and inclusive polities must respond to such changes by raising the consumption floor for all. This is what Pakistan did last week, and it is very significant. 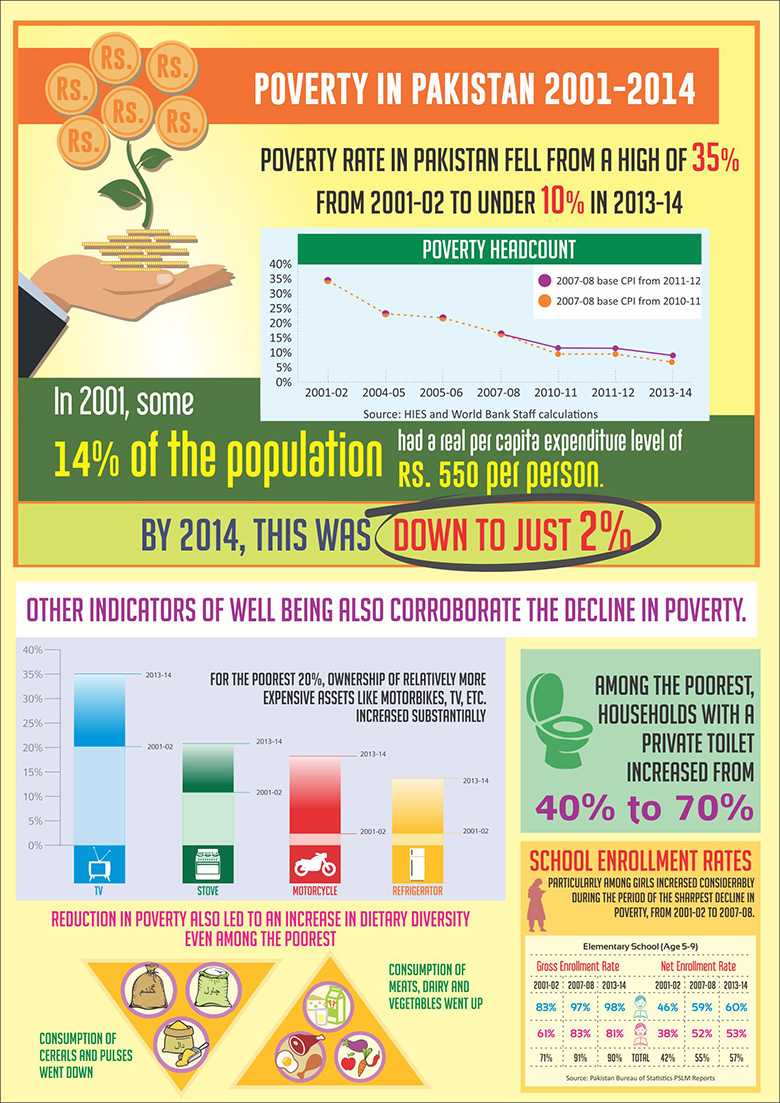 It is also very timely. Pakistan has seen a rapid, and consistent, decline in poverty since 2001, with the headcount poverty rate falling from close to 35% to well under 10% by 2014, the most recent year for which data is available. Though a more comprehensive analysis of the drivers of this process and its sustainability is necessary, there can be little argument that Pakistan is a different country today than it was in 2001. In the past decade and a half, Pakistan has seen rapid urbanization, significant infrastructure growth, substantial movement of labor to the non-farm sector, and massive increases in private remittance inflows by Pakistani workers. Remittances, which tend to benefit poorer households more, have likely fueled a good bit of the decline in poverty. This pattern of declining poverty and large remittance flows is also not unique to Pakistan. It is a story that is playing out in much of South Asia, where most countries are also poised to update their poverty lines.

Pakistan’s people have also changed the way they spend and what they own -- something that we often see when poverty declines. For example, 18% of the poorest households now own motorcycles, compared to just 2% fifteen years ago; the number of households without any type of toilet has been cut in half—from close to 60% to about 30% among the poorest; and even the least advantaged families in Pakistan have moved towards a more diverse diet, with a greater consumption of dairy, meat, and fruits and vegetables. This has also brought the rural diet into much closer alignment with urban food preferences and tastes, as often happens with development.

Last week’s announcement also settles the decade-long confusion on the trend in poverty in Pakistan. The government has officially released both the old and the new poverty lines and poverty rates and committed itself to tracking both going into the future. The back casting of the new line also reiterates that it really does set a higher bar. This new poverty line would have implied a poverty rate of 64% in 2001, rather than the official rate of 34.5% based on the old line.  Both lines show the same declining trend in poverty over the past 15 or so years, however, the new rate is always substantially higher than the old one — precisely because it casts the net wider and brings more of the relatively disadvantaged into the fold of targeted development programs.

However, the true fruits of poverty reduction will only be fully evident when the quality of public service delivery rises to meet the growing needs of the population, and key services are accessible to all. Pakistan now needs to scale up its efforts on this front. There are a number of critical areas such as child stunting and maternal mortality, for example, where despite the reduction in poverty, progress has been slow. Lack of progress on stunting has also been used to question the decline in poverty. However, stunting is only partially a food deficit, and thus a poverty issue. It is equally, if not more, about sanitation and safe drinking water—largely public service delivery issues.

The World Bank remains committed to working with the Government of Pakistan to continue the strong progress on poverty reduction and move the needle on key development indicators, using both development assistance and high quality evidence and analysis to make programs and policies more effective for those who need them the most.