There is great excitement for the 18th South Asian Association for Regional Cooperation (SAARC) summit being held this week in Kathmandu. A big question is whether there will be faster progress towards greater regional trade, which could boost economic growth and spread prosperity across South Asia. Against this backdrop, this article discusses the importance of a well-functioning free trade area in South Asia and how gains would be shared not only by the larger country (India), but also smaller countries in the region.

South Asian leaders have long advocated for an economic union in South Asia. An essential condition for such a union is the South Asian Free Trade Area (SAFTA). Though SAFTA came into effect in 2006 to promote mutual trade and economic cooperation, considerable work remains before South Asia’s 1.67 billion consumers can enjoy the benefits of free trade. Under SAFTA, all countries are allowed to maintain so-called “sensitive lists”, encompassing hundreds of products, where usual FTA tariff concessions do not apply. These lists are a major barrier to free trade and there are no determinate plans to eliminate them. 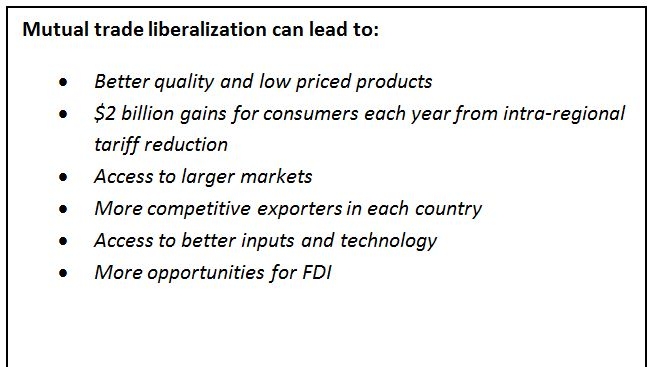 Who would benefit from more open trade? Consumers will likely enjoy greater choice, better quality, and lower prices with goods from neighboring countries. This could lower the cost of living for many: think of cheaper consumer goods from Bangladesh flowing to poor families in India’s less accessible North East, reducing their monthly expenditures. In fact, a recent study shows that intra-regional tariff reduction would lead to an approximate gain of $2 billion a year in welfare for South Asian consumers.

Exporters also benefit, both through market access to 1.67 billion potential consumers as well as the opportunity to source better materials and parts for their products. Both these factors are important as shown in a recent study on India-Bangladesh trade. Studies show that mutual liberalization of trade would increase Bangladesh’s exports 182% to India compared to 134% if India offered one-sided concessions. By the same logic, a fully functioning SAFTA would make exporters in each country more competitive.

Mutual trade liberalization creates opportunities even for small producers who do not export. Positive effects include increased productivity of domestic firms as a result of competitive pressure and access to better inputs and technology. Moreover, trade liberalization can also encourage more foreign direct investment (FDI), which can improve small producers’ access to technology and skills.

On the other hand, less competitive companies that do not take action to become more competitive are likely to suffer from trade liberalization. Companies can incur such losses rather quickly, compared to the gains that are more spread-out and likely to be dispersed over time. Steps by governments to anticipate and address this impact, such as through targeted safety net and retraining programs, will be critical to gain widespread support for trade reforms. Examples include Mexico’s PROCAMPO program, established in 1993–94, to compensate farmers fearing declining prices from the onset of the North American Free Trade Agreement (NAFTA) in 1994.

Mexico has demonstrated how a smaller country can benefit from regional trade and has emerged as the big winner from NAFTA. Mexico’s exports are now $1 billion a day, more than 10 times their 1994 level. US imports from Mexico rose by 500% over 1993-2012, more than twice as fast as imports from the rest of the world. US exports to Mexico also rose faster than to other countries, many of these being products needed by Mexico’s manufacturing industries. Moreover, since NAFTA, Mexico has seen a surge in FDI from the US, and has seen a major expansion of its auto industry, among others.

The Mexico example also emphasizes the need for leadership and preparation for reforms. South Asian leaders can overcome domestic concerns through a combination of strong leadership, and proactive and targeted retraining and safety net measures for workers that will be adversely affected by reforms. They should phase in complete trade liberalization over a reasonable but finite time period—implying a clear timeline for zero tariffs on all products and quickly reducing procedural hindrances to trade.

A fully functioning SAFTA is an essential first step in the vision of an economic union. Leaders should complete SAFTA with the right mix of reforms so that the benefits of deeper integration can begin to be seen on the horizon.

Sanjay Kathuria is Lead Economist, South Asia Regional Cooperation and Integration (SACRI), World Bank and Sohaib Shahid works with SACRI (World Bank) and is a Ph.D Candidate in International Economics at the Graduate Institute of International and Development Studies.