In the past few decades, China's cities have played a remarkable role in driving the country's economic transformation. With an estimated increase of 350 million urban residents over the next 20 years, the time is ripe to look forward, to examine how cities can contribute to resolving China's key development challenges.

Among them, conserving energy, reducing carbon emissions, and managing rapid urbanization have become increasingly urgent. Worldwide, cities account for an estimated 70 percent of global energy-related greenhouse gas emissions, and China's cities are no exception. The Chinese government is seeking to reduce carbon emissions per unit of GDP by 17 percent, a target set for the first time in its 12th Five Year Plan (2011-15).

The good news is that if China's cities embark on a low-carbon growth path, they can help the country reach its emissions target while improving the quality of life for its citizens. By providing better public services to relieve problems such as air pollution and traffic congestion, cities can become more livable, efficient, competitive, and ultimately sustainable.

Some Chinese cities are already implementing pilot programs and policies that can be the basis for low carbon growth. In Kunming, for example, the city's significant investment in urban rail has the potential to achieve compact and cleaner city development. In Tianjin, a new state-of-the-art landfill gas collection system captures methane and other gases, such as carbon dioxide and non-methane organic compounds, reducing greenhouse gas emissions and producing electricity.

The World Bank has supported these initiatives working in partnership with cities and provinces, but more can be done to share these experiences with other cities across China. A recent report released by the World Bank, "Sustainable Low-Carbon City Development in China - Directions in Development", presents the lessons learned from many examples of low-carbon city development in China, complemented by international case studies.

According to the report, China's cities will need to act on multiple fronts. Actions which affect land-use are among the most critical, to avoid getting "locked-in" to a high-carbon growth path. As cities grow, it becomes almost impossible to change the layout of buildings and infrastructure or very costly to modify. The shape of urban development today will determine a city's carbon emissions for many years to come, underscoring the need to get urbanization right the first time.

The report makes five overarching policy recommendations that can set the stage for cities to act: setting the right evaluation indicators for city leaders to provide incentives for low-carbon growth; complementing a functioning system of administrative mechanisms that influence behavior and energy use with greater reliance on market-based approaches, such as allowing resource prices to reflect full cost; breaking the strong and counterproductive link between land use, municipal financing and urban sprawl; identifying mechanisms that would promote more cooperation between sectors and across jurisdictions; and balance mitigation and adaptation measures.

Development challenges in each sector, particularly those related to energy, transport and water and waste management services also need to be addressed. Cities need energy-efficient buildings and industries. They need a transport system that offers credible alternatives to automobiles. They need to shift to efficient management of water, wastewater, and solid waste. And they need to incorporate responses to climate change in their planning, investment decisions, and emergency-preparedness plans.

The complex challenges facing China's cities require a comprehensive approach, with coordinated action from different levels of government as well as civil society. China's own experience complemented by international experience can help to inform these efforts.

China's cities have an opportunity and the ability to integrate sustainable low-carbon development in their growth, which will help promote sustainable urbanization as well as improve the air quality and urban livability.

The expected decade of rapid expansion presents an opportunity for China's cities: they can change their course of action now, or in 20 years, when they are already locked-in to a high-carbon development path. The choice is clear.

The author is World Bank country director for China. 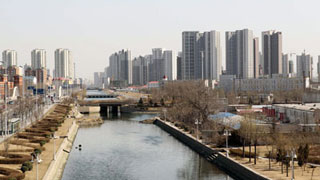