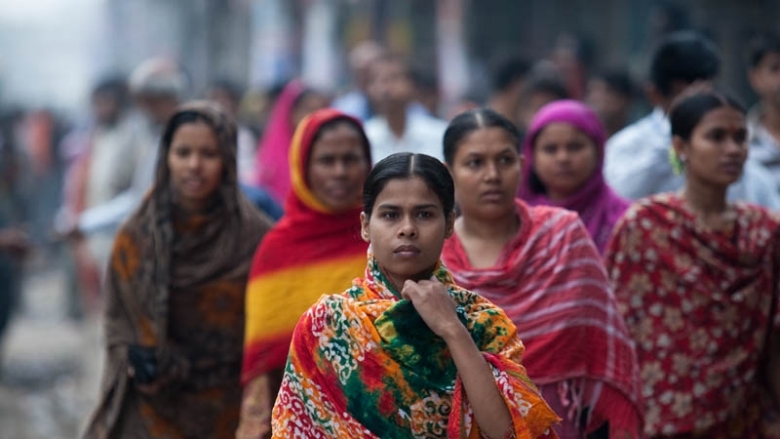 The economy has done well along with declining poverty rates, but Bangladesh can do even better. To tap its vast growth potential, the country needs to improve infrastructure, reduce the relatively higher cost of doing business, as well as make strategic investments in increasing female labor force participation.

Declining rates in poverty have persisted

Indicators such as tax revenue growth (19.6 percent) and growth in import of construction materials (13.6 percent) point that the economy is well on course to maintaining robust growth. The US and Europe, Bangladesh’s largest export markets, as well as private investments are projected to improve in 2017.  Macro-economy is stable, but exchange rate, revenue mobilization and liquidity management face challenges.

Bangladesh’s ranking of 176th out of 190 countries in Doing Business 2017 and 107th out of 140 in the Global Competitiveness Index 2016, one of the lowest in South Asia underscores the need for improving investment and business environment. High levels of non-performing loans make the state-owned banks vulnerable to financial stress.

The growth outlook in the near to medium-term is robust

The economy is likely to grow between 6.4% to 6.8% in 2017 and 2018. However, the country must not be too complacent as it would require to deal with domestic and external risks. Risks on the domestic side include further deterioration in financial sector stability, slippages in addressing fiscal reforms, and political uncertainties in the run up to elections in 2019.

Bangladesh needs higher growth rate to accelerate its journey on the middle income path.  The country will need an investment-led strategy coupled with improvements in the efficiency of public capital. Achieving higher than 7 percent annual growth on a sustained basis will inevitably require increased productivity growth as well as much higher female labor force participation. 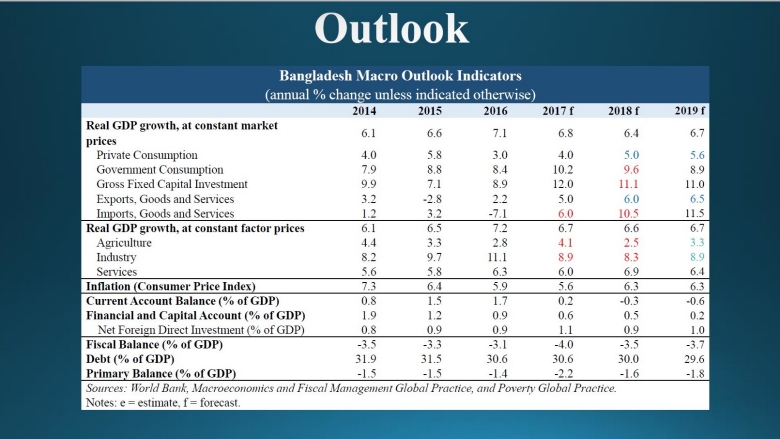 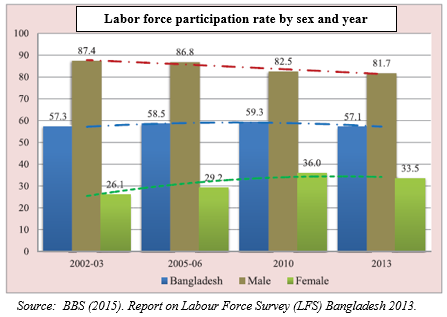 From 1999 to 2013, the increase in female participation in the labor force was remarkable with almost 190 percent increase in the 20-29 age group and 100 percent increase in both the 30-39 age group and 40-49 age group. Despite the increase in the number of women joining the labor force, the number of working women is still much lower than their male counterparts: in 2013, only 33.5 percent women worked where as 81.7 percent men worked in productive sectors. The gender gap in labor force participation can be attributed to several factors, more significantly: i) uneven burden of household responsibilities; ii) human capital deficiency where women are not acquiring the right education and skills demanded by job markets; and iii) open discrimination in job search, hiring, and promotion processes. If Bangladesh can raise the female labor force participation rate to 45 percent by 2020, it will be able to maintain economic growth 1 percentage point above trend through 2020.

How can Bangladesh boost economic growth?

Bangladesh can add about 3 percentage points to baseline growth over the next decade by removing structural impediments to investment and innovation; improving the production, pricing and distribution of energy; ensuring corporate governance in the financial sector; increasing global integration and revenue mobilization.

The government, business and civil society in Bangladesh need to work together to promote gender equality in labor markets, which is a prerequisite to higher and faster growth by undertaking the following measures: