GABORONE, May 5, 2017—The World Bank’s Forever Young the fertility decline experienced by Botswana since the 1980s has country at the edge of a window of demographic opportunity, decades before the rest of Sub-Saharan Africa. In 1980 the total fertility rate (TFR) was 6.2 children per woman and in 2015 it was 2.7 children per woman, the greatest fertility decline in Africa in the last three decades. As a consequence, the proportion of child dependents is declining rapidly, while the working-age population will increase by 29 percent between now and 2050.

The report’s findings were presented to government officials, academia, and other stakeholders in Gaborone in March.

“Botswana will need to rethink its economic strategy to take advantage of the demographic opportunity offered by an increasing workforce,” said Elene Imnadze, World Bank Botswana Country Representative at the Forever Young Report presentation. “The country does not currently rely on labor as the main factor of production. Thus, the potential gains from the demographic opportunity can be severely constrained, as the link between GDP growth and employment is weak.”

A shift of economic structure towards sectors might be required to create more jobs for the new entrants. Just to hold current unemployment rates steady until 2050, Botswana needs to create 340,000 jobs. Its failure to do so could translate into an increase in unemployment, possibly even into social unrest.

Luckily, demography per se will not add much to the fiscal burden of social sectors, such as education, health, and social protection, and it will ease in the case of education. Assuming coverage and spending per pupil stay constant at current levels, fiscal spending on education would decrease by more than 3 percentage points of GDP between now and 2050, as the number of school-age children declines.

“This can provide the government with the necessary fiscal space to increase investment in the productivity of the workforce, focusing on the quality of education and skills demanded by the labor market,” said Jamele Rigolini, Lead and Acting Social Protection Manager. If Botswana were to invest in the productivity of the workforce, and increase average annual labor productivity growth by 0.5 percentage points, the country would achieve by 2050 a 14 percent growth per capita than with the current policy scenario, the report states.

While demographic transition in Botswana is inevitable, a positive dividend from it is not. Botswana will have to act now and implement key policy reforms to allow current and future generations to harness it. 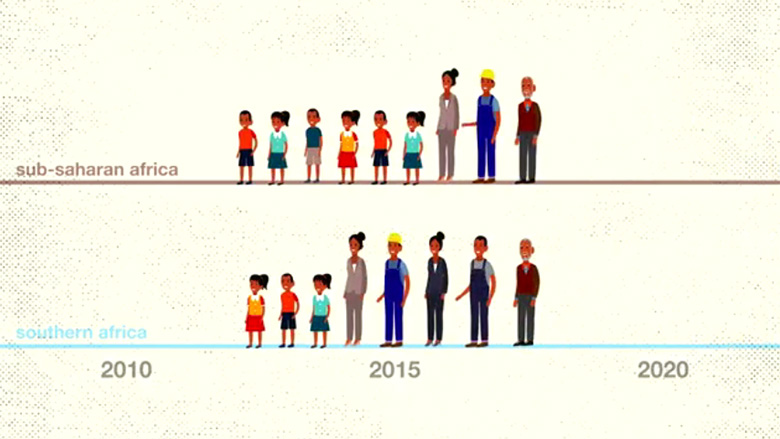