A Bridge to a Better Life for Kpondjo’s River Dwellers 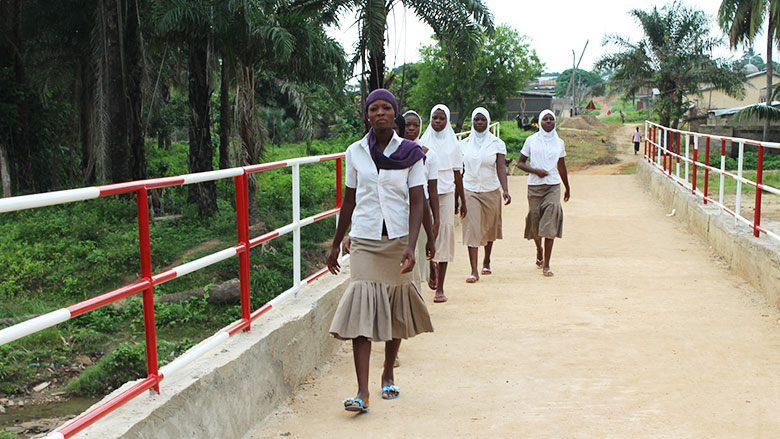 SOKODÉ, January 26, 2017 ─ Sokodé is the main town in the Tchaoudjo Prefecture, which spans 2,650 square kilometers of plains, plateaus, and mountains. The north and the west edge of Tchaoudjo Prefecture consists of steep mountain sides that are prone water runoffs. These waters flow into the Kpandi and the Kpondjo rivers, often flooding households that are found along the way.

Along the Kpondjo River lies Sokodé’s school, market, health center, administrative offices, and residences. River crossings are very frequent, counting close to 1,000 people per day. During the rainy season, when the river begins to overflow its banks and rush furiously down the mountain side, crossings are perilous, obliging inhabitants to circumvent the river and travel long distances to conduct their daily business.

Students of the surrounding schools, among which are Kpondjo’s public primary school and the secondary school “College de l’Aviation”, walk almost nine kilometers every day to avoid the risk of an accident on their way to school. Naturally, student dropout rates are high, to the great displeasure of parents.

“When it looked like it was going to rain, we released children immediately to avoid dangerous river crossings. Parents worried about the security of their children and with time the school became deserted,” recalls, the school principal.

The exchange of goods and services were also compromised by this situation, and severely impacted the population’s livelihoods. As far as the social aspect was concerned, social life on every bank of the river became a hindrance.

The community began to mull over how they could resolve this problem, and the idea of building a bridge to provide residents and students with a safe crossing quickly became a leading solution. A local development committee was formed, supported by teachers and students’ parents, through which the bridge project was submitted to the Integrated Disaster and Land Management Project via the Grass Root Initiatives agency (AGAIB-CENTRALE).

Given the severity of the situation, Kpondjo’s riparian communities came together to perform much of the high intensity labour needed to carry out the project. Their mobilization went beyond expectations. Carried by the momentum set in motion by the local development committee, men and women from both river banks contributed to the project and collaborated in ways that had never happened before.

In regards to floods, the school is now protected by the construction of several gutters that facilitate the flow of water. In addition, the project has conducted reforestation efforts along the river banks to prevent siltation. “If we succeed in the restoration of gallery forest, the river will stabilize and will no longer overflow its banks,” noted Tarouessiè Komi Tellu, Director of Environment in Central Region.

Regarding the maintenance and longevity of the bridge, Kamang Piabalo, regional coordinator of the Grass Root Initiatives (AGAIB Centrale), is not worried. “From an institutional point of view, we are working with the regional Department of Environment and the regional Department of Civil Engineering who have sent experienced technicians with whom we have conducted the implementation process of the project. We have also been supported by the land registry office for the topographical survey regarding the river bed and flood dimensions during the rainy season,” he noted.

The Integrated Disaster and Land Management Project was made possible by a $7.29 million International Development Association (IDA) credit approved in 2011. The objective of the project is multipronged, ranging from financing and implementing hydrometeorological equipment to reduce the risks of natural disasters to the establishment of civil protection agencies such as firefighters to improve emergency responses.