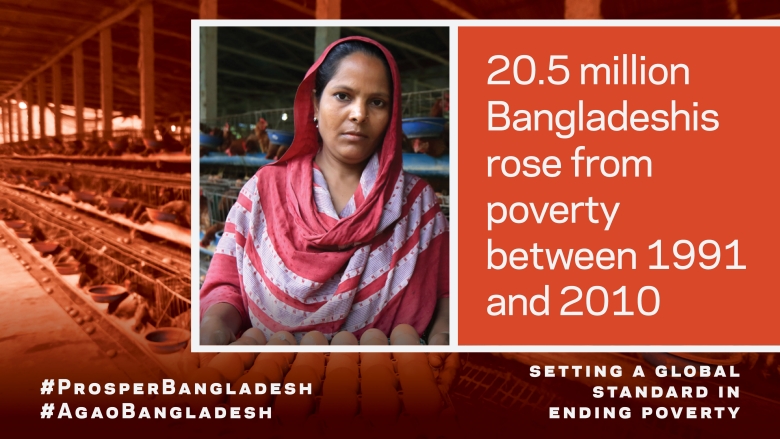 The grant allowed Halima to purchase chicken. She soon grew her income to about 3,000 taka per month from her egg production.

When her husband, a sharecropper, died about 15 years ago, Halima Begum was left to raise her three daughters in a crumbling, leaky house on a small plot of land.

Living in Dakhhin Rakudia village in Barisal district, Halima toiled hard to produce a meager subsistence. When all three daughters married, Halima was reduced to begging from door to door.

In 2012, Halima discovered the Nuton Jibon Livelihood Improvement Project (NJLIP), which provided her with a one-time grant of 5,000 taka. The money allowed her to buy a few goats and chickens, and soon she was selling eggs and the goats, growing her income to about 50,000 taka for the goats and 3,000 taka per month from her egg production. Her steady growth allowed her to receive a small loan from a village credit organization, and she has since invested money in a nearby grocery shop, which provides her a regular return.

" I lost all my hope to survive, but nowadays I don't have to even starve. I have plenty for three full meals a day along with some assets. " 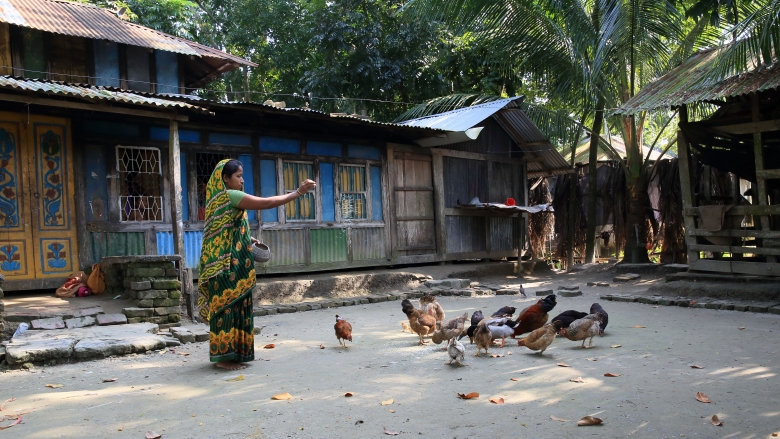 Now in its third phase, the 10-year-old program -- run by the Social Development Foundation, the Bank’s implementing partner -- will also continue to provide support for 3,200 villages.

On a Steady Growth Path

Halima is one of many examples of how the Nuton Jibon project not only rescued Bangladeshis like her from poverty but also injected small amounts of capital into their communities.

With a World Bank commitment of $200 million since 2015, the Nuton Jibon project supports Bangladeshis facing poverty in about 2,500 villages covering 12 districts.

Now in its third phase, the 10-year-old program -- run by the Social Development Foundation, the Bank’s implementing partner -- will also continue to provide support for 3,200 villages. On its current trajectory, NJLIP will benefit about 500,000 poor and extremely poor households, reaching about 2.25 million beneficiaries.

“I will renovate our dwelling house”

Like Halima, Sheuli Begum and her husband, Anis Forayezi, struggled to farm a plot of land too small to feed their family of five. Living in Dakkhin Rakudia village in Barisal district, they did not even have a house to live in, could not afford health care and had to remove their children from school to help supplement the family’s income.

In 2012, Sheuli became a member of a local NJLIP group and started depositing small amounts of savings to receive a loan from the village credit organization. Soon she bought a milch cow and was selling four to five liters of milk per day, earning about 4,500 taka each month. She eventually had enough for more cows, began sending her children to schools and leased an acre of farmland for her husband to cultivate.

“I will renovate our dwelling house, and build a new one on our old homestead for cattle rearing so that I could rear more improved varieties, which will eventually help increase my income,” says Sheuli.